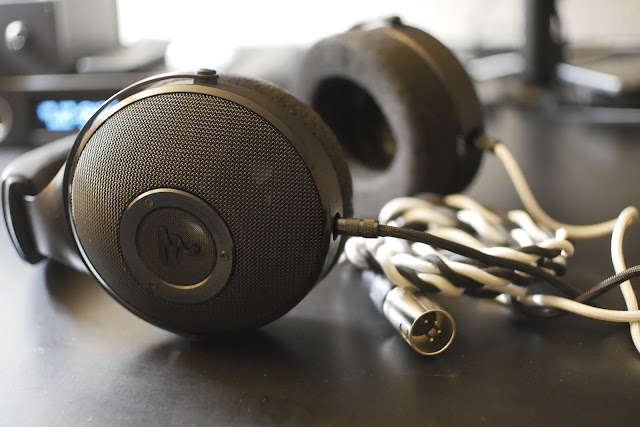 Focal is a French company with a long history of making high quality loudspeakers and studio monitors. In more recent years, they started developing and releasing headphones starting with their Spirit and Listen lines. More recently, they developed a new driver concept that mimics loudspeaker design – a super-near-field monitor driver – and used it on their flagship Utopia, Elear and Clear headphones. These stunning headphones drew instant praise for many reasons I’ll discuss about in my review.

The Elear is the entry-level headphone of this upper-tier series. They retail at $999 but can be found for about $799 now. The Clear, on the other hand, is the mid-tier at $1500. The Utopia is quite a stretch in price past these others at $4000.

Last year, Massdrop announced a collaboration with Focal and started collecting funds for the Focal Elex. This new model to this lineup essentially takes the Elear, removes it’s pads and puts the Clear pads on them, along with a fresh paint job, improved cables from the Clear, and reduces the price tag by a couple hundred dollars to the selling price of $699. Pretty sweet deal, if you ask me.

Update: (10/08/2018) The drop is live again and available to ship now! If you aren't a massdrop member already, you can save $10 when signing up by using this link now!  This is also the link to the drop.

So how are they? Let’s take a look.

The Elex comes packaged in a large magnetic snap box, that opens up with a simple presentation. The headphones are surrounded by thick foam to protect it during shipment, with the two cables (balanced and unbalanced) in another slot in the foam. Pretty simple but effective.

The cables are wrapped in a paracord-like sheath and 6 feet long, as opposed to the really lengthy 10 feet ones that come with the Elear. I found the cords a little stiff, despite looking very attractive. I ended up leaving them in the box and using my own paracord-based braided cables with XLR termination.

The Elex, themselves, feature a darker appearance than the Clear and Elear. The logo is dark on dark so everything blends together giving it a clean finish. The build quality is phenomenal. Everything is well built and sturdy. The alcantara wrapped headband gives a plush feel to the crown of the head, while the metal band and cups feel ultra-premium.
One thing to note with these is that they will leak like crazy. The cups are nothing more than a metal mesh. The driver is fully exposed and completely visible and will leak sound out in all directions. This open-air driver design is all part of Focal’s intent of giving the user a Speaker-like experience.

The Focal Elex is a bit on the heavier side though. Weighing at 450 grams, the headphone is now the heaviest in my lineup of headphones, outweighing the Hifiman HE560 and Audeze Mobius. They are not in the ballpark of Audeze LCD series weight though, so that’s a blessing. You won’t get neck cramps quickly, but for some, the Elex and really, all of the headphones in this Focal lineup may give some neckaches. I found them more comfortable to wear than say the LCD-2 and the Monolith M1060 but the additional weight over my daily driver HE560 shows. 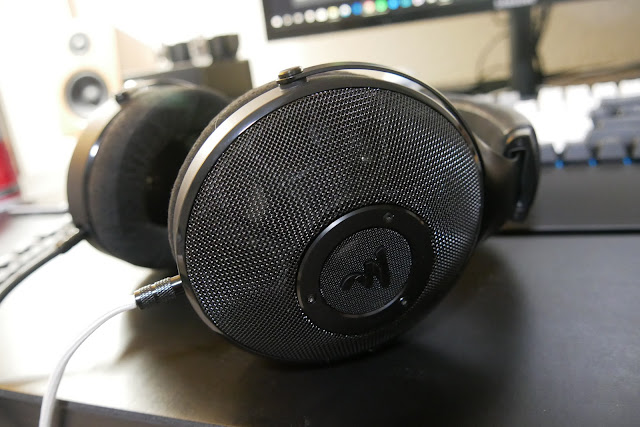 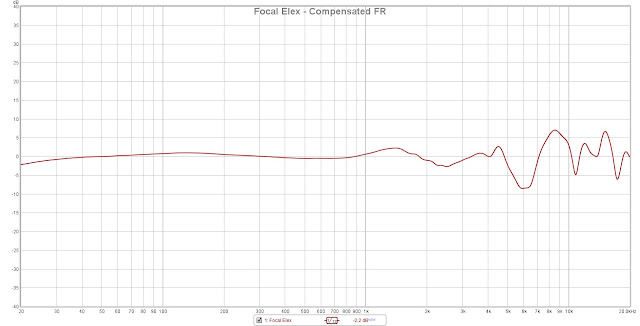 The Focal Elex has all the characteristics I love about headphones. It has a neutral sound-signature that leans bright, providing additional detail and air, and retains a good deep bass that chooses quality over quantity. That’s not to say the Elex isn’t fun.

The bass on these can really hit you. It’s a dynamic driver that pushes the limits of a dynamic driver, with an excursion distance unlike any other headphone. The most impressive thing about it is that the decay is fast and this provides a surprisingly planar-like bass that has punch and dynamic detail. I really have nothing bad to say about this region.

The midrange is ever so slightly forward. This makes the Elex have a more intimate feel to it. Vocals typically sound fantastic, but with the upper-mids being on the brighter side of neutral, they can sometimes have a metal sheen to them, maybe a little more so than the HE560.

Speaking of the two, in my measured MiniDSP EARS responses, they look very similar, outside of the region between 1-3KHz. In this area, the HE560 becomes a little recessed, putting vocals slightly back, while the Elex moves them forward. The bass and the treble response are very similar besides that. 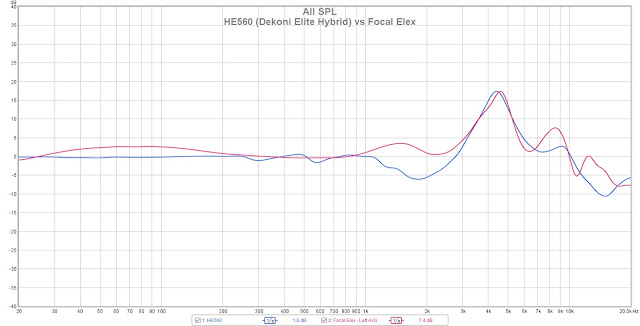 One of my favorite headphone test albums is listening to Daft Punk’s Random Access Memory. It’s one of those albums that have tracks that have great dynamics, some with absurd amounts of bass, and some that have great imaging and width. It has a little bit of everything to try out a new set of cans on.

The Elex destroys this album – especially on the last two tracks. Doin’ It Right is a song that has a vocal intro followed by a bass slam that can knock your socks off. When I heard it for the first time on the Elex, I thought I was listening to the full range towers in my living room. The bass slams, but the transient reponse is fast and you get the little textures that you may not hear in a typical dynamic that compensates with a mid-bass hump. This can sometimes muddy up vocals and the lower mid-range. Not a problem on the Elex.

Contact is the final song on the record which sounds like a typical Daft Punk song. It’s got a big build-up before synths and drums go nuts, all with a spacey theme to it. The little faint sounds in the background are clear and distinguishable and you can easily point to in space where they are coming from. Again, the drums slam with enthusiasm but are never out of control.

Changing pace, another track I’ve been listening to a lot lately is Krysta Nick’s Miles Away. This is a folk/bluegrass song with some fiddles, some acoustic guitars, and some heavy bass notes thrown in during the bridge. But really, I’m focusing on her voice. She has a higher pitched voice, and on some headphones, with exaggerated treble, you may hear sibilance in her voice and harshness in each guitar pluck with this song. For me, the Elex handles this fine. There’s some very subtle over-pronunciations of the SSS sound (sibilance) but its very faint and doesn’t distract me like some other headphones may.

As the HE560 and the Elex share similar treble response, I imagine if you can handle one, you can handle both. I am a huge fan of the HE560, so the Elex is following suit.
For EDM, these can be awesome, or they can suck a lot. It’s a genre that likes to heavily emphasize bass and treble. But in many songs, they distort the heck out of both sides. So while the Elex handles bass with ease, songs where treble is already distorted or on the cusp, may sound extremely bright on the Elex. It’s just the nature of the beast really. This is a brighter than neutral headphone, and if you throw really bright tracks at it, it’s going to be harsh. I found this on several songs going through my EDM playlist.

I like shoegaze, and this headphone does this genre well. Again, the fast decay these drivers produce really helps make this genre excel. The fuzzy sounds, the walls of noise, all of that, they sound great – because the texturing of the sound is never lost. But of course, the downsides are that this headphone requires volume, in my opinion to excel. 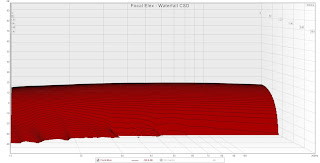 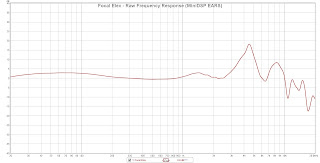 
I found the Elex with potential untapped at lower listening volumes. But this headphone with volume cranked up sounds phenomenal. And because of that, I always find myself listening to this headphone at volumes higher than I normally would on other headphones. This, along with the leakage, could cause problems for others around me.

Luckily, the Elex doesn’t seem to need a big amp to drive them. They are efficient. I did the majority of my listen with this headphone on the Topping DX7 balanced headphone amp/DAC, or the Millet Starving Student Hybrid Tube amp. Both have plenty of power, but I was able to power it to crazy levels using my Onkyo DP-S1 DAP, the Radsone ES100 bluetooth amp, and even my Essential phone with a USB-C to 3.5mm adapter. 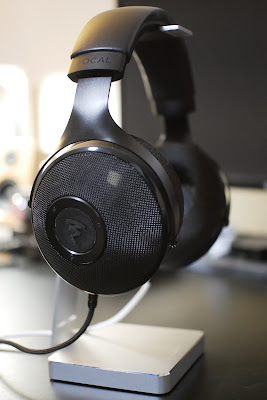 The Elex, and really, any of the Focal line, is one of those headphones you really need to listen and experience. It does sound unlike any thing else. The dynamics have bass quality that can give planars a run for their money, and the upper end provides the needed detail and air that make this headphone a good all-arounder.

The biggest flaws I found with this headphone are that it does leak quite a bit, and can be uncomfortable to wear over a lengthy time due to it’s weight. It is distributed as well as I can imagine given it’s design, however a comfort strap may have helped.

It is a brighter headphone so songs that are emphasized in the upper region may sound harsh. This isn’t really an issue for me on most music I listen to, but for those who may enjoy EDM music, the more bass emphasized Elear may be better suited for the task.

In the end, I am pretty happy with my purchase. This is a luxury looking, feeling and sounding item and it really does come at a good price that Massdrop is offering it at.

I’d like to thank redditor oxtoacart (pwjazz on Headphone Community) for selling me his set at a discounted price. I originally purchased a set from Blinq but it was faulty and I had to return it. He also happened to buy it from them during the same sale, but decided to keep another headphone instead. He graciously offered to sell it to me for the same discounted price on Blinq instead of me waiting for the next Massdrop drop to come out. Thanks!