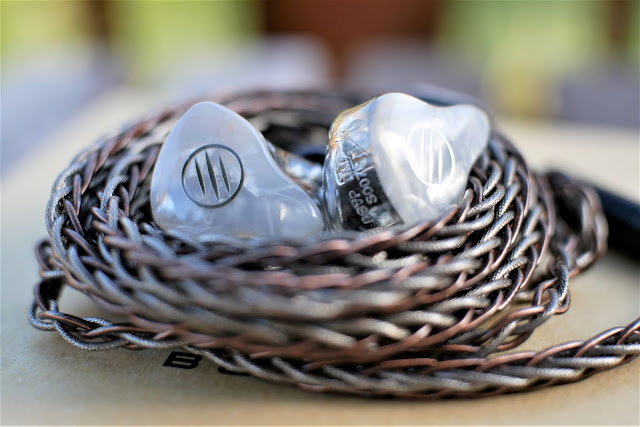 BGVP has had a couple successful In-Ear Monitors (IEM) come out recently with the V-shaped DMG and DM6. Both featured nice quality builds, accessories, and generally/mostly pleasant fun sound-signatures with respect to their prices at $150 and $200.

The company is following up the success of these two with a new model, the DM7, which will be released for pre-order exclusively on Massdrop.com Drop.com on May 6, 2019. This preview unit was sent to me by way of Linsoul.

The acrylic shell design is similar to that of the DM6 before it. So far, the only color I’ve seen is the white/pearl faceplate design with clear ear-side acrylic color. At this time, I do not know what other color options are available, but I imagine there will be the ability to customize it like the DM6 had. The white pearl color is pretty striking, and I really like how it looks. The shell is comfortable to wear with shallower tips for my ears. With lengthier tips, I had a very compressed sensation while wearing them, and it bothered me to wear over long periods of time – which is similar to the feeling I had wearing the BGVP DM7 and Fearless Audio S4, which have similar housings.

The new cable included is very attractive, with a copper/gray intertwined 8-core design. MMCX connectors are used again on this model, and the cable also has pre-formed hooks, which I personally prefer over memory wire. The cable plays nicely and has good ergonomics, and overall, is an improvement over the DMG and DM6 cables. 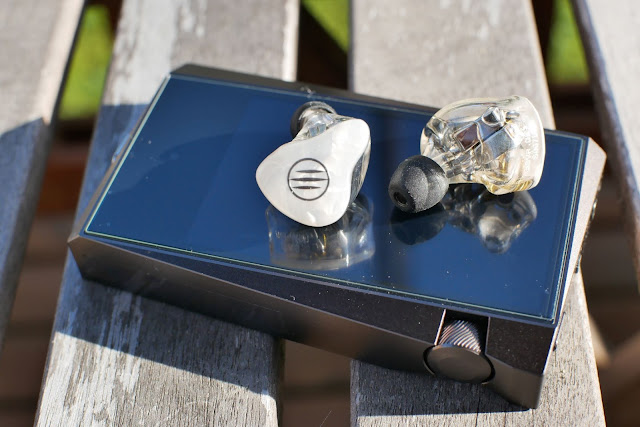 This review will be performed with a mixed playlist of rock, jazz, country, rap, and EDM. The sources used during playback on the DM7 were the RME ADI-2 DAC, the Astell & Kern SR15 A&Norma, and the Pioneer XDP-300R digital audio players. I used a combination of the included 3.5mm cable as well as a Kinboofi 2.5mm balanced cable for this review, as well as JVC SpiralDot tips.

The BGVP DM7 isn’t as similar to the BGVP DM6 as I thought it would given it’s naming convention and what not. Instead, the issues I personally had with the DM6 seem mostly addressed in the DM7. This model has a warm, smooth presentation that has good detail retrieval for this price range. It isn’t without flaws however, but let’s discuss it in more detail. 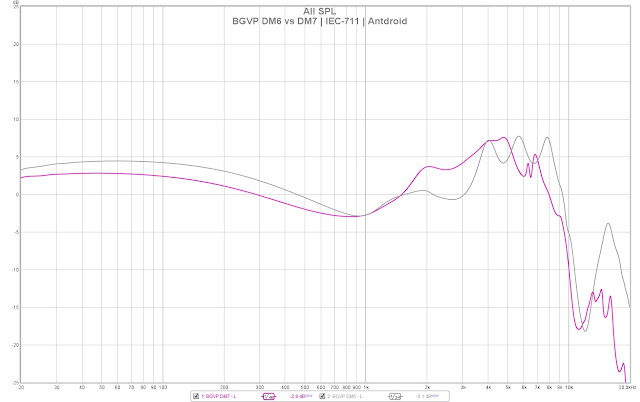 The bass region has good rumble in the songs the demand it. The intro of “Unfinished Sympathy” by Massive Attack has plenty of shake to it and transitions quickly. In Sigur Ros’ “Sven-g-englar”, the bass guitar has plenty of texture and detail, and has a very nice feel to it. It’s soft and subtle, but that’s expected in that song. The e-bow Jonsi uses on his electric guitar has plenty of sustained layering which seems to reproduced well on this IEM. In general, I found that the bass is well controlled and doesn’t exhibit much muddiness at all. It’s warm, and defined, but not bombastic.

The bass transition to mids is generally clean, though there are at times when the bass is slightly over-bearing over the male vocal range of the mids. I felt every 1970s Elton John track I listened to had Sir Elton further back in the recording than I am used to. Male voices in general, felt a little lean. Chris Stapleton, for example, doesn’t have gritty bite that I am used to in songs like “Broken Halos” and “Whiskey and You”. Part of this could partially be due to the dip in the mids before a rise in the upper mids, which puts female voices and guitars a little more forward than the lower mids.
I don’t find this very distracting from the overall sound though, and generally this helps create a little space. In the case of the DM7, it’s generally a more forward presentation, despite this little key difference, and is quite common tuning.

Whether it’s because I’ve been listening to Andromeda and Solaris lately or not, I found the DM7 to be missing a little upper end sparkle. When looking at the Frequency Response chart, it does appear that there’s big roll-off in the upper treble, and that would explain why some of that magic in the higher tier IEMs is missing. The DM6 also presented upper end boost, but generally had higher treble response resulting in what I found a harsher and strained experience.

The DM7 handles treble quite well despite missing the airy presentation of the aforementioned IEMs. The treble response is consistent and smooth. I never felt any sense of harsh peakiness, sibilance and anything other than a comforting presentation with good detail. One thing I did not like about the DM6 was the rise and peak at around 8KHz. The DM7, luckily, has a small rise at around 6.5KHz, and then drops off around 8KHz, and that alleviates the occasional sibilance I heard with the DM6, especially on poorer quality tracks and EDM music.

I found the DM7 to have a medium-to-wide soundstage while easily hearing instrument separation. I never found this IEM to sound congested as I occasionally did with the DM6 model before that. This may have to do with the more balanced sound signature versus the V-shaped sound signature of the DM6.

BGVP DM6:
I went over this in the review quite a bit, but to recap, the DM7 is a more balanced tuning, but still leans on the warmer side. It does not have a big of a bass response or as high of a treble response as the DM6, but has a more mid-forward presentation than the DM6. The DM6 is an IEM that you want for a more fun listen or if you want to hear every little detail up front. The DM7 is a smoother and more relaxing listen in comparison.

Fearless S4:
The Fearless S4 comparison to the DM7 is pretty much exactly the same as what I wrote above for the DM6. At around the same price, I think it’s going to depend on preferences here. The S4, I found to be V-Shaped like the DM6, but with just slightly better instrument separation and detail retrieval, but not 100% sure it’s worth the extra $80 over the DM6. The DM7 is an easier recommendation over the S4 for most people given the tuning.

The following are just “from memory” comparisons, as I do not have them to compare side-by-side:

Audio Technica LS200iS:
More diffuse-field tuning than the DM7, which is closer to a Harman Tuning, but more mid-forward. Both are technically proficient, but DM7 would be my pick over it for better bass response, and better resolution. The LS200iS does extend treble more and provides more air.

Campfire Orion:
Orion is also a DF-like tuning, however has poor extension on both ends of the spectrum with rolled off sub-bass and rolled-off treble. While the mids are quite nice on the Orion, the DM7 offers a much better package overall in terms of sound quality at less the price. 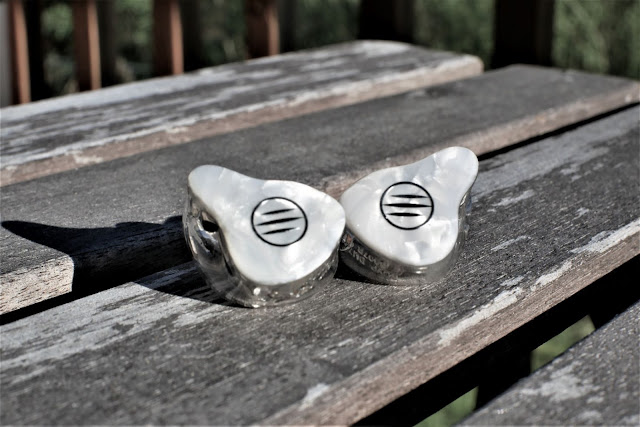 The BGVP DM7 is my favorite BGVP product to date. They do have a quite a few more coming out in the near future and it’ll be interesting to see how the BGVP DMS sounds like. The early FR chart shows a similar sound signature with the extended treble to provide an airier presentation, which I criticized in this review on the DM7. We’ll have to wait and see though whether that FR is “real” and when it’ll be released.

That said though, the DM7 is a nice tuning and provides a clean, warm, inviting presentation that could easily be listened to for hours. I find it to be a warmer improved Moondrop Kanas Pro, which I reviewed with high acclaim earlier this year. Similarly, it is missing some treble spark, which I wished both of these had.

Despite that, I found the DM7 to be appealing to my tastes and an improvement over the DM6, DMG and other IEMs released recently in this price range that I have had a chance to audition.

In the future, you can also purchase this item on Linsoul.com or LSR-Direct Store at Amazon.com