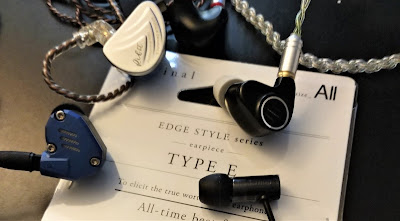 I just wrapped up a business trip away from home and came back to a bunch of new packages at home. The following are just short impressions with reviews to come in the near future. My review backlog is growing rapidly right now.

Received this from another head-fier for free. He got it as a review unit as well. I really wanted to like the ZS6 that KZ released a couple years ago but the treble was too piercing to like. Everything else about it was great and fun. This model seems to have tamed the treble down significantly, maybe too much. The bass is impactful, but a little bloated and can be muddy. It's still a fun IEM that isn't the best technical performer, and really doesn't resolve that well, but is an improvement upon the previous ZS6 and ZS5.

I received this one from Linsoul (http://www.linsoul.com). This is KZ's premium offering with 8-BAs per side, and a large metal/plastic housing. The shell is quite large and fit was a little weird. I originally thought the fit was causing issues with leakage, as the sound coming out was very bright and had basically zero bass quantity at all. Turns out, after measuring them, that these just don't have any bass. The subbass rolls off dramatically, and the treble is 15+ dB boosted over the mids. It's a horror show of sound.

I purchased this set from Audio46. They are plasticky, and feels cheap, even when compared to the E2000 and E3000 models. The fit is troublesome for me as it's very easy to fall out. I resorted to using double flange tips instead of the included premium Final E Tips. Sound is slightly warmer than neutral and laid back. There's a little bit of treble energy around 6K but not harsh once you get the fit right. Overall, a nice pleasant sounding IEM. No detachable cables.

The DMS is the latest from BGVP. I rank this one above the DMG and DM6 for my personal tastes and just below the DM7. Sound-wise, these are V-shaped but balanced much better than the DMG and DM6, as their bass is a little more subdued, the mids are slightly more elevated, and treble isn't sharp or harsh. The bonus on the DM7 is that these extend treble in the upper range more than the more premium model. They don't resolve details as well as the DM6 or DM7 though, which is why these are $155 and not $200 and $300.