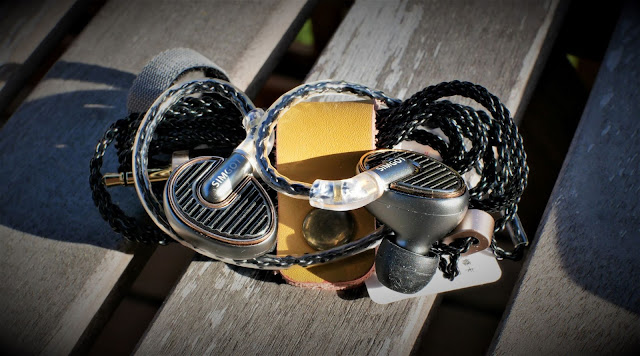 The Simgot EN700 Pro is a single dynamic driver IEM that has an interesting design that is a lot better looking in person than in photos. I had not had a chance to listen to any other Simgot IEM in the past, so this was my first opportunity to do so, and I’d like to thank, and also provide the disclaimer than this IEM was provided to me by Alan of Simgot for reviewing.

The EN700 Pro comes packaged with a nice array of accessories: A series of tips, a carrying case, and a thin, braided black cable. The cable is lightweight and works well enough. It does sometimes tangle but for the most part, I found it very usable. It has preformed soft hooks, and 2-pin connection.

The EN700 Pro itself is a very nice metal shell, that is very comfortable to wear for long periods of time. It’s lightweight and ergonomic. The detail on the faceplate, also metal, is very nice and is much more attractive in-person.

How does it sound?

The Simgot has a gentle V-shaped sound signature, meaning there is a slight dip in the mids and accentuated bass and treble. I found the general sound signature to be lean and clean in the upper end, but a tad bloaty in the lower end, and this varies with volume. 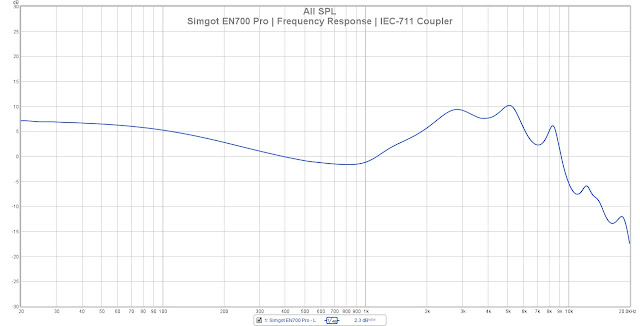 The Fletcher-Munson curve is really apparent on this IEM, more so than others I’ve tried. At lower level listening, this IEM sounds very lean and airy, but as you raise the volume up, the bass becomes more impactful and the midbass becomes more prominent. While it does generate some fast rumble, it also does muddy up the lower mids as well, which is something I am not a huge fan of myself.

The mids on this unit were slightly recessed and vocals, again, felt a little thin. That’s not to say they were bad, but just thinner sounding. I feel like where this IEM excels the most is the upper mids and treble, where it has a good cohesion as it moves up and has a good sense of air and detail. I never found this IEM to be sibilant and I threw my sibilance tests at it with an array of music from Norah Jones, Cocteau Twins, and Alvvays without any trouble.

The EN700 Pro does have an average-width soundstage and does sometimes feel a little congested during more hectic moments with more things going on in the scene.

The Moondrop Kanas Pro follows a Harman Target curve for the most part and is rather smooth, just like this model is. The EN700 Pro has much more bass feels to it than the KP, and more air. The KP’s mids are more balanced and even, despite being a tad recessed. Detail-wise, I feel like they’re comparable with a slight nod to the EN700 Pro. Where the EN700 Pro fails is the occasional muddiness at higher volumes, where the KP improves with volume, the EN700 Pro starts to fall apart.

The DMG does share similarities to the EN700 Pro in that they are both v-shaped with coherent mids. The DMG treble is much more-harsh than the EN700 Pro, but I found the DMG bass to be cleaner and less muddy.

The Etymotics ER3SR is essentially the same IEM as the ER4SR but manufactured in China instead of the USA and with slightly lower tolerances. It follows the diffuse-field target which is more balanced and mid-forward than the EN700 Pro. The ER3SR does not have anywhere near the same bass performance as the EN700 Pro but doesn’t exhibit muddiness either. Small microdetails are more apparent on the ER3SR and coherency is unquestionably better. The upper end extension however gets the EN700 Pro a slight nod with more air and space.

The EN700 Pro is a generally decent IEM. I found the upper mids and treble to be coherent and with good air. I did not like the bass performance on it as I found it a little too muddy due to the boosted bass and lower-mids dip, and slower bass decay. The whole package does come with a nice set of accessories and a very comfortable and well crafted shell design.

This price in the market is very full of competition and the EN700 Pro sort of carves itself a spot somewhere in the middle of it all.