BGVP just released the BGVP DM7 and are right back at it with this new semi-open back DMS model that is seen as an upgrade on the DMG. A short time ago, someone posted a quick measurement of the DMS and it looked quite nice, especially when considering the DMG and DM6. I was busy reviewing the DM7 though and sort of forgot about the DMS at the time. The DM7 turned out to be a nice intimate sound, which was pricier than the rest of the BGVP lineup at the time. But I had the DMS in the back of mind.

Lucky for me, Linsoul sent me a review unit of the BGVP DMS recently and I had a few weeks now of listening to it, and spoilers ahead, once I put them on, I have a hard time taking them off. But there are a bunch of quality IEMs that have just come out at this price range and I’ll try my best to compare to them in this review of the DMS. So, let’s get started! 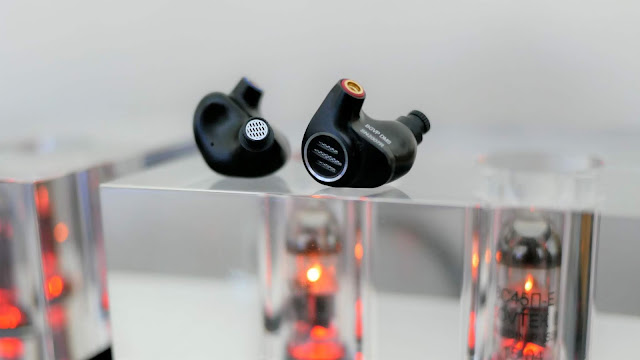 The new DMS features a new housing that takes a lot of the stylings of the DMG, and adds a beveled circular grill on the shell. This semi-open look provides air for the single dynamic driver to play with, and that along with the 6 balanced armature drivers in each shell are packaged within this metal housing. The shell also features mmcx connections, and the included cable is a bit generic and standard. This is a bit disappointing considering the premium and attractive cables that came with the DMG, DM6 and DM7 IEMs.

In terms of fit and wearability, I found that, like the DMG, I can easily wear the DMS for hours upon hours. The shell size and shape really go well with my ear anatomy and I have nothing but good things to say about this area.

Isolation will definitely be an area of concern here for those who want to completely block off external noise. The grill on the front has large enough holes that you can hear your surroundings with no music on pretty well, and it’ll let a little bit in while music is playing. I didn’t find this too distracting, but I wouldn’t recommend these for transportation and plane travel. In addition to poorer isolation, these do leak sound out of the grill. That said, you have to be really blasting music to make your ears hurt before anyone can hear the music, unless they were right up against your ear for some reason.

The DMS is a fun, foot-moving listen. It has a slightly less V-shaped sound than it’s older brother DMG, but it still retains a boosted bass and dipped mids, but the upper mids and treble is much smoother and restrained than the DMG and the DM6. This gives it an overall very warm, yet lively listen that is both wide, fast, and entertaining. 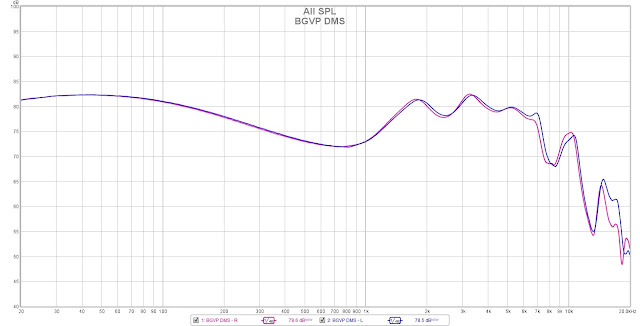 It’s not without faults though. The bass, while very fast and surprisingly toned down from the DMG and DM6, still is missing some key things. First, it is not very detailed and tricky bass layering and textures feel smeared and dirty. It’s weighty and has impact, but the dynamic driver is also nimble and fast. I found this to be quite enjoyable on fast-electronic dancey tracks like Chromeo’s Must’ve Been and Count Me Out.

Sub-bass has nice rumble and extends quite well. I felt it when I listen to some tracks that push those limits – for example, local Seattle drummer, KJ Sawka, and his “Subconnectors” track has some deep electronic bass lines that provide backup to his drumming. The impact of each drum hit, and the panning of the electronic samples and Christa Wells echoes feels quite wide and positioned pretty well for this type of budget class.

Pretty Lights, who I find to be a more modern DJ Shadow, and his track, “Gazing at the Glare” has similar bass impact and wide instrumentation and sampling that just works well with the DMS. In these electronic dance tracks, I don’t necessarily look for clean, taut, and well detailed bass and so the DMS does excel here in my opinion. It struggles more in rock music where I want to hear the intricacies of the bass guitar and the kick drums and what not.

The mids are recessed a few dB and in practice, this doesn’t seem to really rear any significant troubles. The lower mids are warm and rich, with male vocals slightly behind, while female vocals sound more forward. Guitar strings are accentuated slightly with this V-shape signature, but with the tamer upper-mids and treble than that of the DM6 and some other Chinese IEMs and other generic V-shape in-ears, there is never a sense of harshness at all. Sometimes that can make the mids a tad dull, but I find there is enough bite here to make it lively.

Treble, as mentioned before, is nice and relaxed, yet extended. I find it one of the strongest parts of this IEM and it has a great sense of air, especially with the open-back and open sound. The fact that it’s generally even and extended makes it a much better listen than the DMG and the DM6, which I found could be quite harsh and bright with certain genres, recordings, and songs.

Here is a selection of other $150 IEMs that I have enjoyed in the past or are new to the scene and would be competition to the BGVP DMS:

Etymotics ER2XR
The latest line from the original In-Ear company, Etymotics, is their dynamic driver-based ER2 series. I not had a chance to listen to the ER2SE (Studio Edition) model, but I recently purchased the ER2XR (Extended Range) version which features a warmer, and elevated bass response than the standard diffuse-field-like sound signature of the SE models. I also did try out the ER3SE (BA-based model). The ER2XR is quite a good IEM with great isolation and that trumps the open-back DMS. The DMS has punchier and more bass response, however the ER2XR has a surprisingly warm and rich sound with as quick if not quicker bass response than the DMS. ER2XR wins on clarity, imaging, and resolution, but the DMS wins out, in spades, with width and soundstage.

Moondrop Kanas Pro
The Moondrop Kanas Pro is still my top overall pick in this price class, and the reason being is that it has a great all-around sound profile that works across multiple genres. It has less bass impact and rumble than the DMS but it’s ever-present. It’s sound signature is more flat and probably more tonally correct, but it also does not extend quite as well and it’s treble isn’t as even. With the Moondrop Kanas Pro, I find it’s a great choice for everyone, while the DMS is a more fun, get your body moving type of sound. 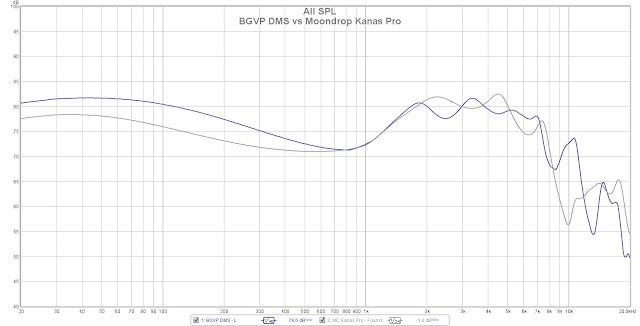 BGVP DMG
The DMG is the predecessor to the DMS and it really doesn’t do anything better in any sound category. In terms of cable, it does beat it though. The DMG has more bass and more elevated treble, but both are borderline over-done. The saving grace for the DMG was that it had very coherent mids for a V-shaped IEM, but the DMS has taken this to another level in terms of coherency and a non-fatiguing listen.

Knowledge Zenith AS16
The newest flagship KZ IEM is the 8 BA (per side) AS16 model which recently was released. I have yet to do a full review on this (it’s coming…) but this has a much different tuning than the DMS. It’s a bright headphone that is brighter than Diffuse Field tuning, and severely lacking bass quantity. The detail level of the AS16 is better than the DMS, however the anemic bass makes this IEM very sterile and very boring, and rather harsh compared to the DMS.

BGVP DM6
The DM6 is priced $40 above the DMS, and beats it out in terms of resolution and clarity, as well as elevated bass response and bass detail. The DMS is much tamer in upper mids and treble and this doesn’t cause the same harshness and occasional harshness I found with the DM6 set I was sent. The spaciousness of the DMS also beats out the DM6, which I found to be a bit muddled and closed-in on busier songs. The DM6 was a mixed-bag experience for me, but with the DMS, I know what I am getting. 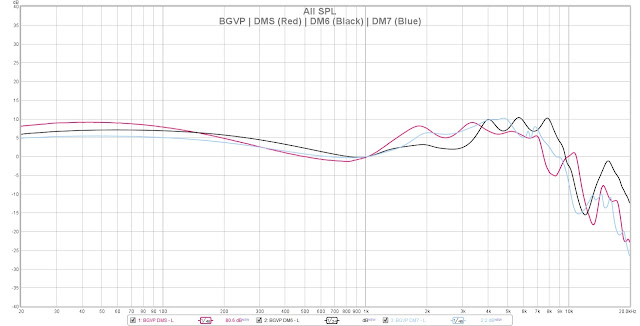 I’ve mentioned in a few times now, but I’ll reiterate that the DMS has a very open and wider than average soundstage that keeps these IEMs on my ear with a lively, fun natured sound. The bass can feel “bleh” sometimes, but there’s always good fast punchiness and gives you good quantity without being excessive. Mids are warm and rich, and yet the added air and good treble response makes this IEM an enjoyable listen, especially for dance tracks, and sounds that require a good wide soundstage to excel.

If you are interested in this IEM, please check out Linsoul.com for more information and to purchase it. This IEM can also be found on amazon.com at the following location: https://www.amazon.com/Linsoul-Hybrid-Audiophile-Earphone-Detachable/dp/B07RDPDZ2F 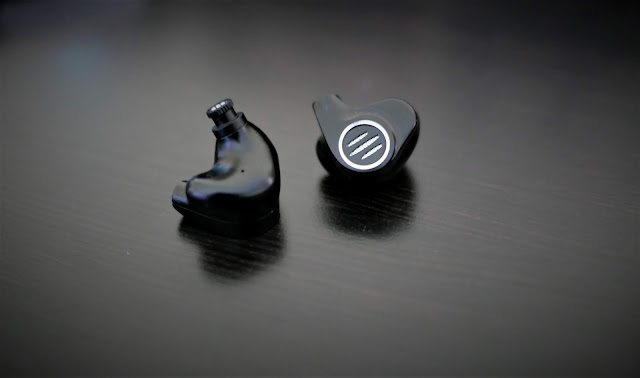