The popular Campfire Audio Andromeda has been around for a few years now and I only recently had a chance to listen to the original green model. I had previously listened the Stainless Steel “S” model for a short period of time at a coffee shop, but they have slightly different sound signatures.

The Andromeda has also seen an overhaul of accessories lately, packaged with a new, easier to use cable, new carrying case similar to the IO I recently reviewed, and new box and paper packaging. The preview unit I received from The Headphone Community, was the older version of the Andromeda, as I got it just before the release of the 2019 refresh.

This review will be kept pretty short since this is an already popular IEM with plenty of discussion and reviews on the internet. What I do want to touch on are my own personal feelings towards this model.


First off, I find the shallow nozzles to be a little annoying to fit. I ended up having to use longer tips to make up for the shallow depth, and it ends up being alright. The sharp edges of the shell make this IEM stand out however it occasionally does hit up against my ear and while not terrible, some people may find it discomforting.

Other than that, the build quality is excellent, despite seeing many photos of the color getting scratched and scuffed and fading away. It does add some natural beauty to it though, or at least I assume it would. The ones I borrowed are in perfect shape as they were brand new when I received it.


Well, I must say, I came in to this with huge expectations, and at first, I was quite disappointed. The Andromeda wasn’t exactly what I was looking for. I happened to demo it the same time as Campfire’s Vega and Solaris, and I fell in love with Solaris’s balanced holographic sound with good fast and detailed bass. 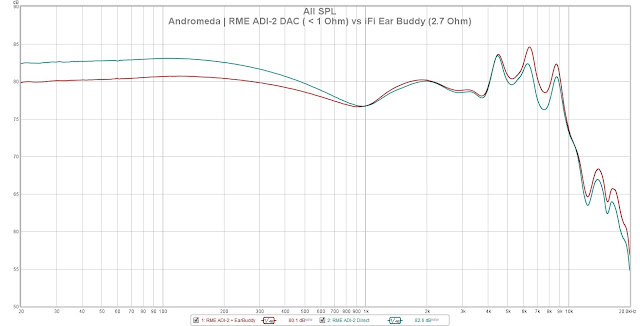 The Andromeda has bass quantity and its quality isn’t bad either, but it doesn’t quite live up to the Solaris. The Andromeda is also super finicky with sources. Measuring it on a near zero output impedance source and one that is about 2.5 ohm creates two completely different soundscapes. One is quite bassy and even a tad muddy, while the other is more balanced but a little dull at the same time.

I guess my major points of contention for me are that the Andromeda has a very laid back tuning compared to what I generally prefer, with not a lot of upper mid presence and energy, but it makes up for it with a very controlled and steady sound that is both technical, decently wide, and detailed. The upper end treble is quite good, with just the right amount of glimmer and air that makes the IEM easy to listen to but addicting.


To me, I find the Andromeda to be in the same type of category as the Sennheiser HD6X0 series, where it’s steady, done well and rock solid, but it’s not quite what I was looking for at this time, but still - I can totally understand why it is enjoyable because it checks the box on so many levels. It doesn’t do a lot to truly excite me though, and that’s why I ended up choosing the Solaris over it. Nothing wrong with Andromeda though.