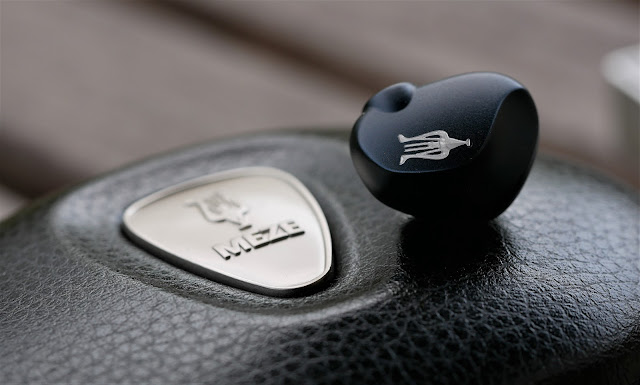 Meze Audio is a headphone company based out of Romania and are most famous for their Meze 99 wood cup headphones, which have even recently seen a special Massdrop version made available. The company started making IEMs a couple years ago with budget offerings of the wooden Meze 11 and Meze 12, but these were targeted at entry level customers. Recently though, Meze has moved a little away from their wood crafted headphones and earphones and made an impressive looking carbon fiber and aluminum housing for their flagship planar-magnetic Empyrean and the aluminum CNC shells of the Meze Rai Penta.

The $1099 Rai Penta is the subject at hand, and this unit was provided on loan by Kitsune Hifi, who are also known as Holo Audio USA, and are a Meze Audio dealer and currently one of the few places in the world to order these in stock. 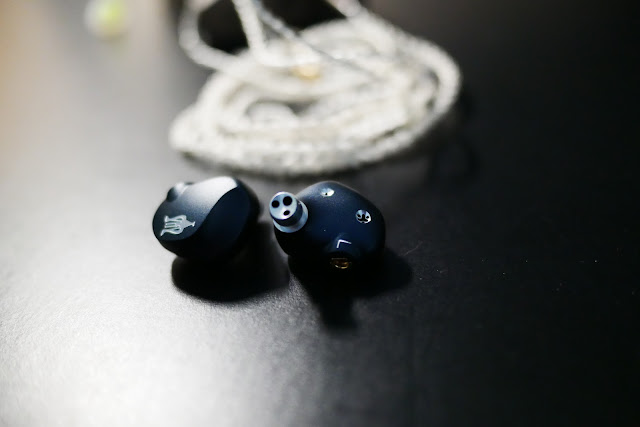 The Rai Penta gets its name from having 5 total drivers: 1 dynamic driver, 2 mid BA drivers and 2 high BA drivers – making the Rai Penta an interesting hybrid design. In addition, the CNC aluminum shell features a couple vents to equalize pressure and provided air for bass. The shell is absolutely stunning.

It’s a dark blue color in a very comfortable design that also sports anodized aluminum nozzle stem that is beautifully bored out with 3 holes at the front, and precision drilled holes for the vents. The Meze logo is milled out and engraved on the shell face giving this a very exquisite and luxurious and yet a modern simplistic look.

Fit with the Rai Penta is pain-free. This type of size and design really works well with my ears and I found them to be extremely comfortable and good enough isolating to make me happy, despite having vents.

The included cable is a tightly wound silver colored cable featuring mmcx connectors. The splitter and source connector are in a charcoal color and feature the Meze logo, and Meze Audio branding on them. Both are also made from anodized aluminum. Nice touches.

In addition to the ear-tips and cable, Meze packages the Rai Penta with a cleaning brush tool, a 1/4 inch adapter, an airplane adapter, a set of tips, and a very attractive EVA hard case. This zippered case, has a metal Meze Audio logo on the front and has storage pockets to carry accessories and the IEMs. I find these to be one of the better-looking cases included with in-ear phones. 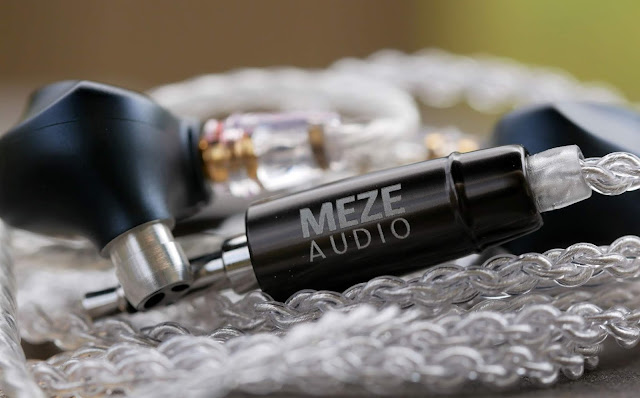 Before I hit the sound category, let me give you a little look into what I find neutral and what I am using in this review. First off, I tend to lean towards the Diffuse Field target as a neutral signature as opposed to the Harman Target curve which is popular today. My own preferred curve is somewhere in between the two, but more of a warm DF curve with less treble emphasis. As a reference, I currently am using the qdc Anole VX as my daily driver IEM, and before that the Campfire Solaris. I also really enjoy the Moondrop Kanas Pro and ER2XR as a more budget tier IEM that fits my sound signature well.

My sources used in this review include the RME ADI-2 DAC and it’s 3.5mm IEM output, and 4 different portable sources: The Astell & Kern SR15 A&Norma (warmer DAP), Pioneer XDP-300R (cooler and airy), Fiio M11 (neutral-ish airy), and the Samsung Galaxy S10e phone. I ended up using Final Audio E tips with the Fibae 7 for most of the usage.

The Rai Penta presents a warm and slightly punchy diffuse-field like sound – that is, it is considered neutral with an intimate sound that doesn’t really emphasize any specific frequency over another. There is a small mid-bass hump that does pack the punchy character to an otherwise flat tuning.

I found the Penta to work really well with most genres. In London Grammar’s If You Wait album, which is a bit dark, simple yet full of intricate bass lines and guitar plucks, as well as the hallowing voice of Hannah Reid, the Rai Penta shows some good clean low end response that has impact when needed but may not rumble as hard as I want at times. Reid’s voice really does shine, while also providing a little depth and openness.

Where the Rai Penta does lack is the extension department. Subbass does roll-off slightly and the bass impact isn’t large or spectacular. It’s well-controlled, taut, and punchy. There is a small mid-bass hump, but minor enough to provide that punchy attack while not muddying up the waters in the mid range.

I found vocals to be evenly distributed across the board. Male vocals like Chris Stapleton sound accurate and warm. There’s enough thickness here to give it some meat.

There is a small dip in the lower treble which helps provide the Penta with some depth and stage but some may not like the possible hollowness it may bring. It’s not noticeable to me, as I’d take the small gain in width over a little dip here. That’s not to say the Rai Penta has a large soundstage or anything. It really doesn’t. It’s within the confines of your head space, and the lack of full treble extension in the upper bounds, does keep it from sounding refreshingly airy and sparkly. But it’s not also something I totally miss either. Rolling off treble a little early is much more preferred than say, exciting boosts to it which could create sibilance artifacts or shrill bright harsh artifacts.

The lack of treble extension does make the intro of a song like Beach House’s Lemon Glow missing the tick-tick-tick hi-hat that leads the song that extra energy to make stand out a bit. But the little bass bump does help push the kick drum up a bit to provide a little slam for an otherwise tame bassline in a song that can really shake with certain headphones. So in a sense, this song does sound a tad boring, especially when compared to a more U- or V-shaped sound profile which emphasizes the bass and treble areas.

In Norah Jones’s Seven Days, I found the Penta to be very engaging with good instrument separation between the bass strokes on the right ear and the guitar working its simple magic on the left. Jones’s voice sounds intimate and natural and coming at you right down the middle. During the section of the track where there’s a backup echo during the chorus, the vocals do seem a tad dry and missing some resolution, when compared to my qdc Anole VX, but that’s an IEM that’s double the price of this one. I did find this IEM comparable to the Custom Art Fibae 7, which I reviewed recently.

So, where does that leave the Rai Penta vs the competition?

I just hinted a little bit at this. But let’s run down a few select IEMs I’ve used a lot recently. 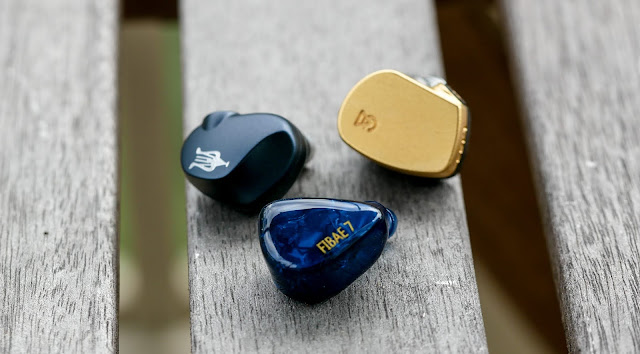 qdc Anole VX
The qdc Anole VX is my latest purchase and I am in love with it. It clicks a lot of boxes for me. Compared to the Meze Rai Penta is a tad unfair as it’s double the price. That said though, the Meze Rai Penta is a leaner sounding IEM compared to the VX. The flagship from qdc has a warmer rich tuning, no matter which switch you turn on versus the Rai Penta. The Penta also lacks some of the extension that the VX does, but can be punchier with that midbass hump that the VX does not exhibit. In general, the VX is an overall better IEM in technicalities, with clearer sound, detail resolution, and space, however the Meze does beat it in terms of a cleaner, more neutral sound, and a wonderful build and appearance.

Campfire Solaris
The Campfire flagship is a few hundred dollars more than the Meze flagship, and features a bigger bass boost which creates a thicker and warmer sound signature. The Meze may actually beat the Solaris in terms of bass resolution however, as the Solaris can sound sometimes a little smeared and lacking bass detail. That said, however, I like the bass decay and natural organic sound of the Solaris over the Rai Penta. The Penta does mids quite well, and tops the Solaris here working with vocals just a tad more cleanly. The Solaris however beats the Penta with it’s depth and height distance, while both are similarly wide. Treble on the Solaris sounds airier and more extended then the Penta, however with some people may find the additional treble boost a little harsh and fatiguing at times with the Solaris versus the Rai Penta.

Custom Art Fibae 7
The new flagship from Custom Art shares quite a bit of similarities to the Meze Rai Penta and I’ve captured much of it in my earlier review of the Fibae 7. Both follow a warm DF tuning, however the Penta sounds a bit punchier than the Fibae 7, and sometimes a little more detailed. The Rai Penta has the edge on soundstage over the more intimate Fibae 7, while the Fibae 7 extends slightly better. The Rai Penta design and aesthetics tops the charts for me, and the acrylic Fibae 7 housing can’t come close to the workmanship of the Rai Penta design. 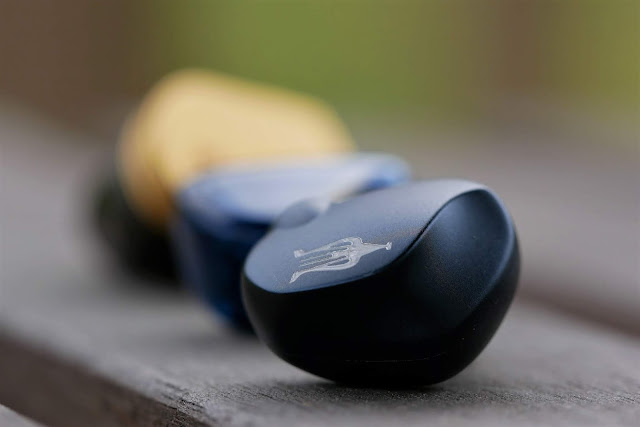 The Meze Rai Penta is a solid addition to the Meze lineup. It’s tuned a tad safe, but it should be appealing for use with multiple genres. It does lack extension in subbass and treble, however, it does well with keeping a generally clean coherent sound. The mids can be a little troubled at times, but I found that the upper-mid range/lower-treble drop that is commonly done on IEMs at this level really benefits increasing soundstage, which I can accept (as per my Solaris and Anole VX purchases in the recent past).

The Rai Penta’s build is fantastic and the star of the show here. You really do get a great design that is also comfortable to wear for long periods of time, and the accessories package is on par if not topping many other IEMs in this price range.

So, at the end of the day, while I do like the Meze Rai Penta, I find it a tad boring for my tastes. I think it’s a good tuning though, and will work well for many people and I can recommend it as a purchase, however keeping in mind that there are many other IEMs in this general class that may perform at or better in one, two, three or more areas of sound. 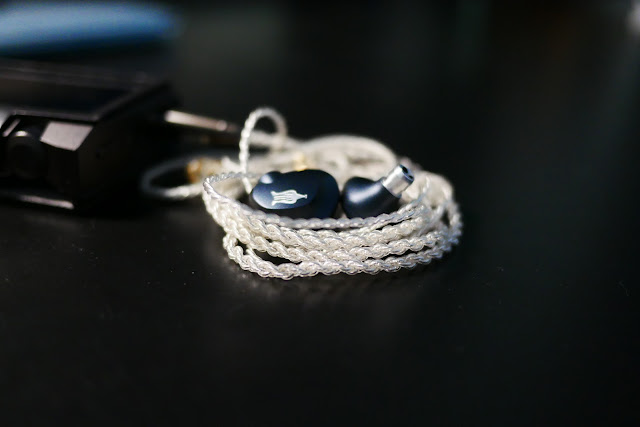