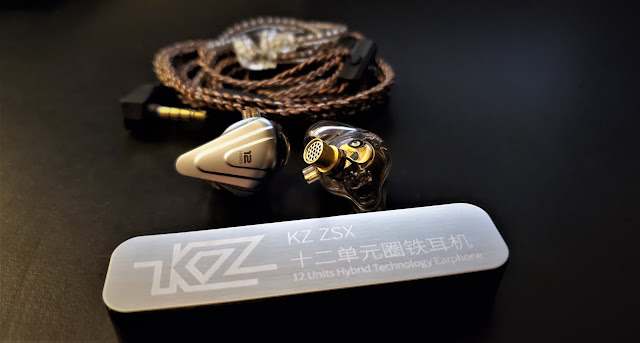 The Terminator is here. The latest KZ ZSX, dubbed, The Terminator, is a 6-driver hybrid in-ear monitor earphone with a single dynamic driver and 5 balanced armature drivers feeding it through a rather large shell. The new shell design has a silver triangular look to it that looks a little strange to me, but feels well made at the same time.

The fit itself is a bit of a problem. It’s larger than other IEMs I’ve tried outside of say the Campfire Solaris and my current daily driver, the qdc Anole VX, and the highly praised Sony IER-Z1R, but it’s in the same realm as those in terms of size. The main issue for me is that the angle of the nozzle spout is not in the most optimal direction for my ear and that its not only long, but also has a large diameter. Now, long nozzle shafts don’t bother me, as something like the Moondrop Kanas Pro is really comfortable for me, and so are things like the Campfire Andromeda Gold and IO. Large diameter IEMs are also not a problem, but the combination of the two, with the angle choice, makes it a tough fit for me, and limits my time wearing these to shorter spurts – much like the issues I faced with the Campfire Solaris previously. 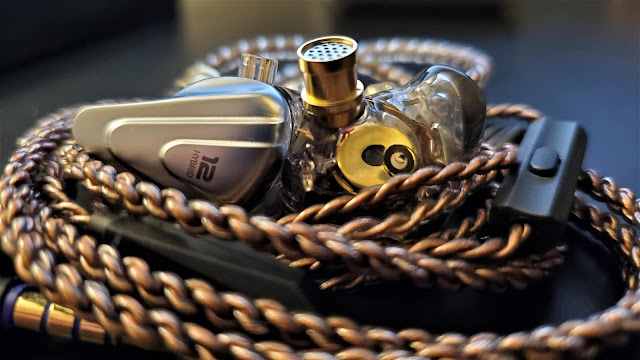 The ZSX has a full-bodied sound that isn’t too far away from some of my favorite top of the line tunings like the ones presented by Solaris and the IER-Z1R – which both present a warm, balanced sound with treble energy and thick lower mids. Of course, the significantly cheaper KZ ZSX is nowhere near the other two when it comes to things like resolution, speed, imaging, and detail. In fact, its quite a step back, but still, the ZSX is impressive for a product made by KZ and of a $50 price tag.

The bass is punchy and elevated, however not bolstered enough to be considered a super bassy IEM. It has good subbass and a downward slope to the mids that has gives impact to drum kicks and has a mild slam to it – more so than the Solaris did. The bass resolution is pretty mediocre though, and the speed of the driver is a tad slow, leaving bass notes to hang out a little longer than I would like. I do tend to prefer nimble, quick, and agile bass responses that provide plenty of detail and textured layering, and the ZSX sounds more like bass noise than bass resolution.

The mid-range is warm, rich and full of body. I never found the mid-range to be too recessed – in fact, I actually like how it’s presented. Male vocals have girth to it, and female vocals do shine and are forward with a response curve that starts sloping upward at 1KHz and almost follows a Diffuse Field type curve until the about 3.5KHz where it has a small drop. This does help it from being too forward and too harsh for me, and gives it a little bit more breathing room from possible congestion.

There is a slight bit of harshness due to an elevated treble peak that can make things a little spicy at times. I never found it overly bright and fatiguing, but just note that it’s not as smooth sounding in that area as say the Solaris or the VX, which I really both enjoy it’s tuning. It’s more along the lines of the Sony IER-Z1R, with its slightly bright tuning in that area. Again, I’m just using some of these known IEMs as a base line and I am not saying the ZSX is of the same caliber. It’s just a similar overall tuning from a high-level overview shot of the IEM’s sound. 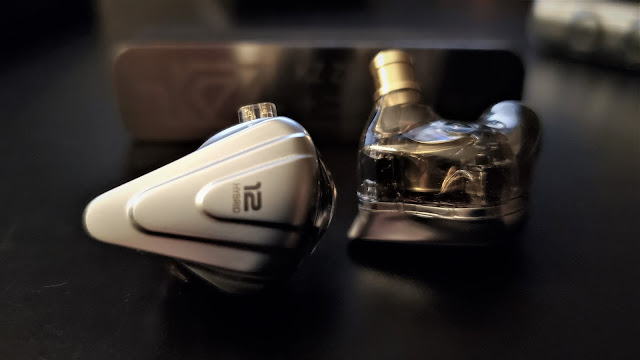 I found the ZSX sounding best with rock and country music. The elevated bass that isn’t over done gives drums and bass guitars the needed bump, while the punchiness gives the kick needed to steer rock songs, while the tuning of the upper-midrange and treble gives clarity to guitars and cymbals. It works well for these popular genres.


The ZSX is a nice choice for a budget IEM, and easily my favorite of one from KZ. It actually is very similar in tuning to the ZS10 Pro, my previous favorite, but downplays the treble a bit, which makes this one not as harsh and fatiguing as the ZS10 Pro was.

The fit, however, is large and should be something to look out for. It’s not going to fit with some people’s ears, including mine, and that could make this a non-starter to begin with. I do have smaller ear canals than a lot of people, and typically wear small ear tips, so the larger nozzle shape and angle really don’t do me any favors here.

So, if you can deal with that shortcoming and your budget was around $50, and you like this type of tuning, this could be a decent set to look out for. It falls in-line with tuning of some of my favorites, and that’s half the battle for me, and that’s why this was instantly one that I enjoyed when I first heard it.

The KZ ZSX was provided to me by Linsoul as a review unit. You can find the KZ ZSX on the Linsoul store at http://www.Linsoul.com or on their Amazon Store Page.