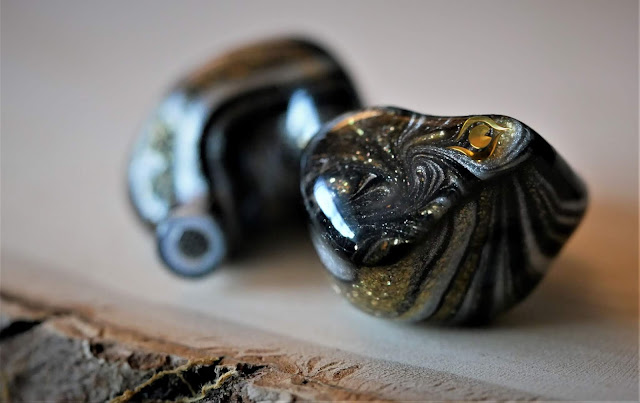 Peacock Audio: Who are they? Where did they come from? Never heard of them and I couldn’t find any information on them besides the Linsoul.com listing for their new P1 in-ear monitor earphone. This dynamic driver earphone is absolutely beautiful though, and these guys must have experience doing work before to make something as detailed and beautiful as how the shells on the P1 look.

This review unit was provided to me by Lillian of Linsoul. If you are interested in purchasing this, please visit the Linsoul Official Store or LSR-Direct on Amazon.com.

When I opened the package, I was greeted with layers and layers of stuff. The first layer had a nice fake leather case, similar to ones I already own. Then the IEMs are present in their beautiful gold, silver and black “peacock” feather design. They look like sand-art, with just great texturing and a look like no other universal IEM I’ve seen yet.

Once you hit the cables and tips, there’s another layer, which includes a Bluetooth cable! That’s a surprise. The cable that comes with the IEM is nice, white and thick. It handles pretty well and looks nice, and matches the aesthetics of the P1. 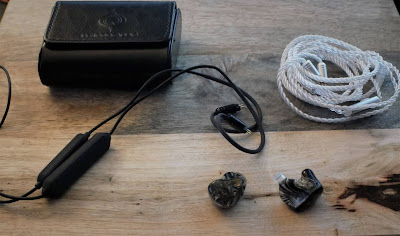 The shells have a custom-universal type fit but smaller than many of these types of shell designs that have been released recently, such as ones from BGVP, qdc, and others. This smaller shape really fits nicely for a deep, snug fit in my ears and I never felt any discomfort with them.

The P1 has a gentle V-shape sound signature that doesn’t sound quite as good as they look, but isn’t bad either. There’s boosted bass, a recessed mid-range and a peak in the 8K area that I am sometimes sensitive to, but I didn’t fit these to bother me as much as I normally would, most likely due to the upper-mids being boosted as well.

The P1 bass is elevated. They have quite a bit of rumble, and punch. Bass is presented a little muddy and flabby at times. It’s a little slower than I would like, and the fact that mid-range drops off quite a bit does cause some signs of muddy lower midrange behavior. W

The mid-range does sound a tad flat. The bass brings a lot of warmth, but also recession here, which makes the lower mids and central mid-range area not quite as defined and standing out. There’s a little bit of bloat in the lower-midrange, but I only find it distracting on songs that are bass heavy.

Luckily, the upper mid-range, which I find important, is done well, with a nice smooth curve with upper treble air that presents a decent spacious sound, though I still find this IEM to be rather forward and intimate sounding. It would be very congested if not for the airy treble, which borders on harshness and fatigue. 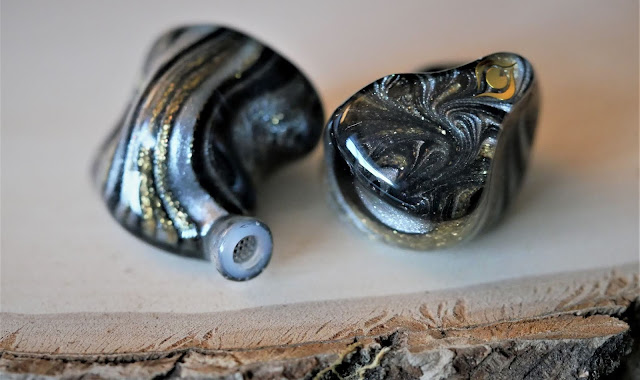 The very beginning of the track features a little bit of fiddling around and breathing and it’s barely audible on the P1. When the kick drum settles in, it’s the star of the show, standing in front and center, while the guitar string plucks ring in with good precision. I was surprised that the guitar strings in this track didn’t cause my fatiguing, and cymbals seemed well controlled.

The vocals of the band seem a tad more distant than I would prefer, and missing a little bit of it’s magic. When 2:13 rolls around, the drums again, take over the show. At around the 3 minute mark, the bassline has a nice rumble to it, while the snare drum seems well controlled. Once the guitar solo begins, and the track becomes a bit more busy, the P1 doesn’t seem to really struggle too much with this busy passage. There’s just enough distance between instruments and width to keep things from being congested.

This is a nice electro-rock song with a lot of ambience and bass hits. The P1 is well suited for these heavy bass strikes that crash in throughout the song. Each transition is met with a good amount of rumble and feeling, and drums seemed to be controlled relatively well. On a song like this, the advantage of having the vocals a little further back is that it does not become shouty, which I do find on headphones with a more mid-forward sound.

This acoustic classic from the early 90’s is one of my favorite songs. While it may seem like a sweet and gentle track, the bass guitar on this song is quite powerful and the P1 may overly emphasize it a bit, as it drowns out Hope Sandoval’s already quiet voice a bit more. That’s unfortunately, because her strained and breathy vocals are so full of raw emotion and feelings that it seems a like a sin to have it buried behind heavy bass notes. The harmonica featured on this song seems slightly muted and missing some of it’s dynamics, however it doesn’t fatigue like it may on some other headphones and earphones.

The DM7 is another warm-tuned earphone, but is more balanced in nature. It’s mid-range isn’t as far recessed, nor is it’s bass as elevated. The DM7 does lack a bit of treble extension and air that the P1 has though and may sound intimate and congested in relation to the P1.

The DM6 is also V-shaped, but I felt it was beyond my threshold for brightness leading to a very fatiguing and unappetizing listen. It’s very detailed and beats the P1 in that department, and also seems to be a bit faster, due to it’s BA configuration. I find the P1 a much more natural sounding IEM.

The KXXS shares many similarities in tuning to the P1, however the KXXS is just a tad brighter than I like and I ended up hearing some little bits of edgy brightness. The P1 is also more bass heavy and it's definitely apparent when A-Bing between the two. This ends up being fatiguing to me. I do like the KXXS's less bass-heavy presentation however, and picking it as my preferred normal listen.

In the end, I think the P1 is a decent sounding IEM, but I feel like the majority of the money and value goes into the excellent shell design, appearance, and comfort. The sound leaves a bit to be desired for the price tag and this is mostly because I find the tuning not overly exciting, but also doesn’t do anything particularly wrong either. It’s a little more elevated in the bass department than I would like, but it’s not so much that I find obnoxious. The mid-range is a little boring, and that’s very important to me, and that’s most of the reason why I find that the P1 is just missing an X-Factor in terms of sound.

That said however, I find the overall package of this P1 a pretty good investment. It does come in a beautifully designed shell that fits well, a nice carrying case, and the added bonus of Bluetooth cables to swap out for a semi-wireless experience.