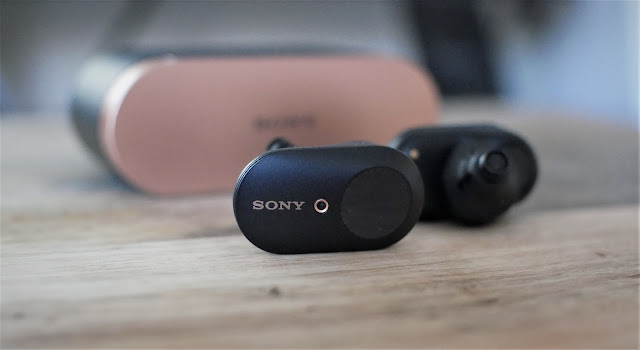 In my last review, I wrote that I don’t typically write a lot of reviews on Bluetooth products, but maybe that’s just the start of many. Today, I will be writing about Sony’s newest Bluetooth active noise-cancelling in-ear, the WF-1000XM3.

This new model is an updated model of the original WF-1000X, and it seems Sony skipped over a 2nd generation set and went straight to the third generation. The in-ear comes in both black and beige colors and has a shape that sits in the ear as well as the main shell sitting outside your ear, in a horizontal shape. I must say, that this is a weird design for me, especially after primarily wearing the Samsung Galaxy Buds, which is almost completely within your ear, and feels more like a traditional in-ear monitor.

The WF-1000XM3 isn’t nearly as comfortable. The odd shape does take some time to get used to and the angled nozzles can make it comfortable, or uncomfortable to each individual. For me, as is normal with most IEMs, my left ear doesn’t even feel them at all on me, while my right ear is rather finicky. I had demo’d these at a Head-Fi meet recently and sort of knew what I was getting myself into when I bought these recently. At the time, they fit well for my 15 minutes or so of usage, but I wasn’t so sure about it’s long-term wear on my ears. Since I’ve been traveling for work lately, I decided to pick them up and try them out as I’d get some good mileage and usage on them on airplanes.

The included tips are actually rather nice. They include 4 sizes of silicone tips which kind of remind me of Audeze’s iSine Groovy tips, but without the grooves, and 4 sizes of these silicone-foam hybrid tips that feel like squishy gel. While both were pretty comfortable, I wish there was a size in-between the two smaller sizes of either tips for my ears. I ended up tip rolling for a while, and ended up landing on SpinFit CP140 Small tips, which have become a standard for me when using IEMs. These have provided good comfort for plane rides, mostly short 2-3 hour hops between cities, and walking around airport terminals.

I still find the Galaxy Buds to be more comfortable in general, with a more ergonomic fit, but the Sony WF-1000XM3 hasn’t been as awful to use as I imagined. They still have a little bit of pain after an hour and I sometimes readjust for comfort.

The WF-1000XM3’s main selling point is that it’s a true wireless In-Ear with Sony’s full active noise cancellation technology from their over-ear flagship. Using them is as simple as tapping the left ear phone’s sensor to change between ambient sound mode, noise cancellation, and normal “off” mode, where the DSP is still active but it just uses passive isolation. The ambient mode was pretty handy for hearing my surroundings, and the passive mode works for most normal situations and conserves battery.

Speaking of battery-life, these aren’t the best. They are rated at about 6 hours with ANC on, which I found to be pretty accurate. In about 2 hours and 45 minutes of usage, the Sony app said they were down to 50%. That’s really short, but it works for my commuter flight needs. They carrying case also acts as a charging dock and gives you more power quickly.

Now back to the topic of ANC. The noise cancelling feature works pretty well. Most of my trips have been on Embraer small commuter jets, and they aren’t as quiet as some of the larger Boeing and Airbus planes which fly at higher altitude and have better noise suppression. The XM3 performed as well or better than my Sony over-ears, which are the H.Ear On 2 WH-H900N. They aren’t the flagship Sonys, but I actually prefer them supremely over the WH-1000XM series, since they actually sound more neutral and balanced.

There was still some low engine hum, but it was massively reduced from using the Galaxy Buds, which did almost nothing, and my normal passive IEMs, the qdc Anole VX in terms of isolation.

In my sound trials, I was primarily using the iBasso DX160 and Samsung Galaxy S10e as source, using AAC streaming. I didn’t have any DSP on the source activated, so it was primarily what the WF-1000XM3’s on-board DAC/Amp and DSP provided for sound quality.

The WF-1000XM3 has a very balanced sound, that does lean warm and laid back. It’s a rich sound that is enticing and lush, while having enough upper-midrange and lower treble boost (pinna compensation) to bring voices and instruments to life. And unlike a lot of Sony IEMs, there’s no sense of possibility of treble harshness.

There’s no denying the fact that the WF-1000XM3 has a lifted bass that is not unlike a lot of consumer-level headphones. That said, there’s no emphasis in the mid-bass, and lucky for me, the sub-bass is the area that is gained without a bloated mid-bass region that I really dislike. The added bass that downslopes towards 1KHz adds a lot of warmth, especially when compared to the Samsung Galaxy Buds, which is much more lean sounding in comparison, even with the “Soft” EQ activated.
In actual listening, a song that is very heavy bass guitar focused like The Beatles’ I Want You (She’s So Heavy), the bass’s presence is rather distinguishable and very heavy. It’s not heavy enough to distract and muddy too much, but it’s omni-present. There’s also a decent level of texturing though not as clean, layered and detailed as some of my more resolving, and wired, IEMs.

The mid-range has a warmer tonality as I mentioned before. The vocals are forward, thick, and lush. Male voices have a lot of power to them, more so than females, surprisingly. That said, the upper mid-range is still forward and should be attractive to those who like higher pitched female music.

The treble region is a little on the laid-back side. I never felt any sense of harshness, straining, or any sibilance, which is a good thing. All that, while I found that the WF-1000XM3 still retained decent clarity for being a consumer-level true wireless and that’s pretty impressive. Due to the it being slightly laid back though, some may miss airy soundscapes and wider soundstages, and I must say, the WF-1000XM3 is a more intimate sounding in-ear. There was a smaller sense of openness and depth when listening to these, and so in that respect, imaging was just average. I found the Galaxy Buds excelling over the WF-1000XM3 in the treble and soundstage department. 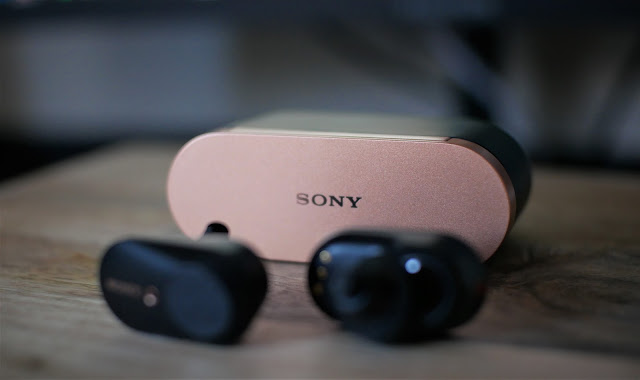 I was excited to hear how this true-wireless in-ear from Sony would be like when it was first announced, but I held back because of the design. It didn’t look nearly as comfortable as the Samsung Galaxy Buds. And for the most part, that’s still true, however, I was able to find a suitable tip combination that has worked well for me.

With that, I have been rewarded with a nice noise-cancellation that works great for airplanes and travel, and a very lush, warm and rich sounding in-ear that sounds much better than expected. In some ways, I prefer how they sound to the Galaxy Buds, but I am missing some of the treble clarity and airiness that those bring. That said, the WF-1000XM3 is a nice IEM that sounds great for this price range, and one I can recommend, as long as you can deal with the fit.