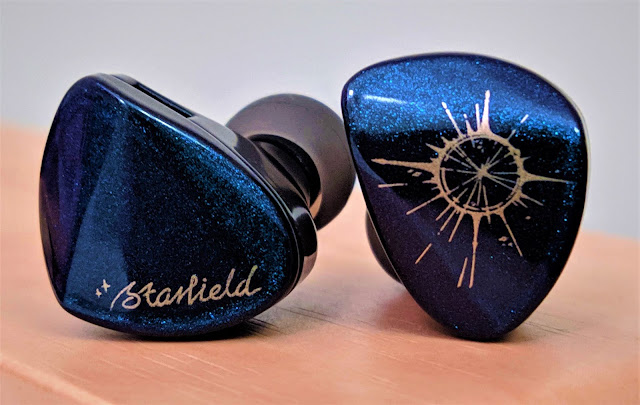 A prologue from Antdroid: Up until now, I (Anthony) have been posting my own solo impressions and reviews on this audio blog. Today, I welcome one of my favorite online personalities and reviewer as a guest to this blog, Fc-Construct, who many may have seen post on Reddit and Head-Fi!


The MoonDrop Starfield is a new $110 single dynamic driver offering from MoonDrop that boasts a carbon nanotube diaphragm. Full disclaimer: I was sent the Starfield as a review unit from HiFiGo in exchange for my honest opinions.

The Starfield has a glittery deep blue shell with asymmetrical designs on its faceplates. Under the right lighting conditions, it's rather aesthetically pleasing. The shell has a decent amount of heft to it and is made fully out of metal. It's very comfortable in my ears, though the nozzle bore is on the larger side. It comes with a supple braided blue recessed 2-pin cable that matches the shell's aesthetic.

The box additionally comes with a few other goodies such as 2 extra sets of S, M, L tips, a small case, and oddly enough, tweezers and nozzle filters. I'm not exactly sure how to replace these filters but it's comforting to know that it's there. 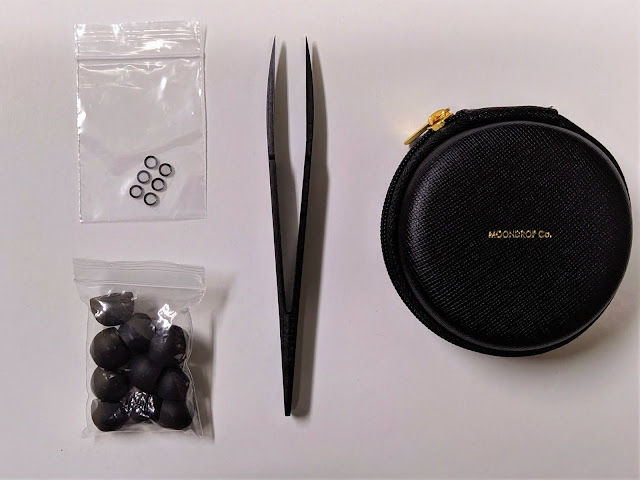 The Starfield is a full-sounding, bassy IEM with a generous amount of warmth and a very polite treble response. It would excel in many modern bass-heavy genres with a special mention of electric guitar tracks.

Unashamedly bassy, the Starfield is coherent in the low frequencies with excellent bass note definition and solid sub-bass rumble. Bass guitar lines are clear, distinct, and nuanced. The Starfield trades quick transients for a heavier (and fatter) impact with a slight trailing decay that accentuates the full thump of the kick. It attempts to re-create that body-impact of a live room and does so with limited success. The trade-off is that the bass can sound "rounded-off" as if the skins on the drums are just a little loose. Even though the bass is elevated significantly, the Starfield does not bloat much into the mid-range. I have no issues with the timbre here; the Starfield proudly boasts a quality dynamic driver nature. If you love the feel of a thick, full bass response, especially a rolling bass guitar, the Starfield will satisfy.

The lower-mids are the name of the game here. They are undoubtedly thick, contributing to the warm, full-bodied sound the Starfield embodies. At times, the Starfield can get overwhelmed in complex passages with too many instruments occupying the lower mids. There, the Starfield starts to blend notes and becomes a touch muddy, though this is rare. The tonality of instruments is quite good; there wasn't anything I could pick out as being off in any way. Vocals on the Starfield lean towards the warm and thick side of things, with enough upper mids to stand out from the mix without being recessed. Otherwise, the vocals on the Starfield isn't too special; don't expect any haunting female voices from it any time soon. Interestingly enough, electric guitars are what stood out the most for me in the mids. The tuning of the Starfield somehow managed to lend great body and a superb tone to the electric guitars. It's awesome if you listen to gritty rock.

The Starfield's treble is polite. Too polite. It is never harsh nor sibilant to me. There is a good amount of lower treble that allows for the crisp attack of hats/cymbals and definition in the upper harmonics for acoustic guitars. However, the treble does start to slowly recess past that point, taking along with it the delicate decay of the cymbals or the airiness of the track. On occasion, I felt that the Starfield was almost suffocated or even choked (particularly in the vocals) due to the lack of treble, especially when coming from a more neutral IEM. This feeling went away over time as I got used to the Starfield's tuning. While the Starfield keeps a polite treble to craft a non-offensive experience for everyone listening, I can't help but feel that it partially compromises greatness for mere goodness.

The Starfield does a good job here. I'd classify it as an all-rounder. Not extraordinary but a good and competent effort. Good width and depth to the soundstage. Imaging is equally solid with more nuance beyond the 3-blob phenomena.

The Starfield earns major points here. It has fantastic resolution in spite of a light treble response. In particular, the lower-mids and bass regions are very well resolved. Both the electric and bass guitars benefit greatly from the Starfield's dynamic driver and are beautifully rendered in most tracks I tried. Instruments have a nice separation without feeling congested, though as noted above, they sometimes do step on each other's toes when passages get too dense with lower-mid energy. 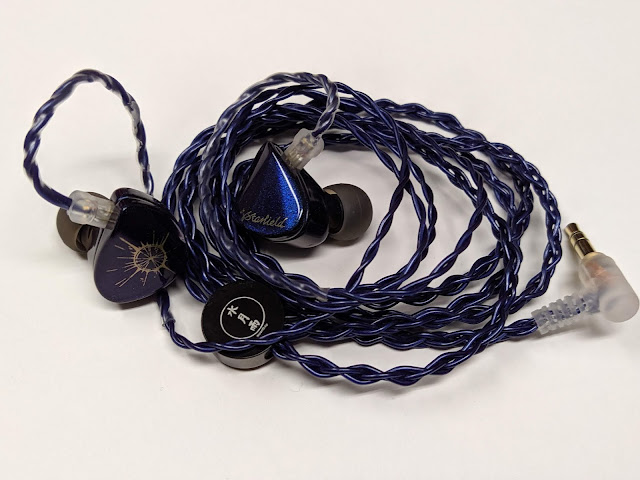 I chose the Tin Audio T4 to compare the MoonDrop Starfield to as both IEMs hover around the ~$100 mark and represent a new generation of Chi-Fi monitors. In addition, ever since I first reviewed the T4, it remains my standard for comparisons for budget IEMs due to it's neutral tuning and solid technical foundation for the $100 mark.

When A/Bing, the tuning differences are immediate. The Starfield is thick in comparison to the T4's lean nature, with significantly upper-bass to lower mids that make the Starfield sound fuller. The recessed treble in the Starfield is apparent against the T4's unashamed treble response; while the T4 carries the delicate drawn-out shimmer of the cymbals better, the attack of hats/cymbals can sometimes sound harsh compared to the ever polite Starfield. Conversely, the mid-upper treble in the T4 is a breath of fresh air to the Starfield lack thereof. Surprisingly, both have a comparable amount of sub-bass response, with the Starfield edging it out slightly. Technicalities wise, the Starfield is a quarter step above the T4, mostly due to a well-rounded staging presentation than the T4's flatter stage and strong resolution in the face of heavy low-mids emphasis.

Between the two, I think most customers would be better served with the Starfield. It has a much more forgiving and fun tuning compared to the T4's analytical slant without sacrificing technicalities. Fit is also better with the Starfield and the 2-pin connection tends to be more reliable than an MMCX. Congratulations MoonDrop. I thought it would be a while before another ChiFi IEM comes along to meet or exceed the $100 standard the T4 set but here is the Starfield less than half a year later.

Yes. For $110, the MoonDrop Starfield is an IEM that has no major flaws while sporting a consumer-friendly tuning for popular modern genres. Price tag aside, I think of the Starfield as a solidly mid-fi IEM that few would complain about. Its thicker nature and lack of airiness in the treble may be a little off-putting initially to those coming from more neutral IEMs but likely that feeling will go away with time. For most people, the Starfield will be a superb good starting point into the world of IEMs as you'll need to start spending quite a bit more to solidly beat them. I'll be interested to see how the IEM scene develops as companies like MoonDrop make better and better products at very competitive prices.

Edit: HiFiGo has provided me with a $5 coupon for the Starfield. The code is HIFIGO5 for use at checkout.