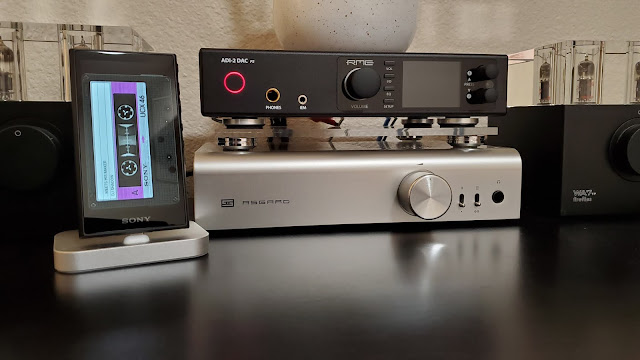 I have occasionally posted some first impressions but have not made it a big point on this blog, however in the most recent re-design, I added linked tags in the menu to Impressions and Guides. Hopefully, I'll use these article options more as I've gotten to test a lot of random gear at meets, through purchases, and through loaners and demo samples but may not necessarily have the time to immediately write a review right away, or ever, in some cases.


Today, I'll cover two new headphone products that I just purchased outright. The first is the Schiit Asgard 3 and the other is the Sony NW-A105 Digital Audio Player Walkman.


This is the latest headphone amp from Schiit and is the first in this Asgard series in 7 years! The Asgard 1 and 2 were Class A amps, and the new Asgard 3 is essentially an AB amp which runs mostly in Class A mode and then can linearly switch when it needs more current. I haven't owned either of the Asgards previously, but I have used them and I remember they got very, very hot. Most Class A amps do. The new Asgard 3 is warm to the touch on the top chassis, and the bottom can be hot. I put an Acrylic stand between the RME ADI-2 DAC and the Asgard 3's top just to make sure I don't overheat either unit, as shown in the top photo.

As far as my first sound impressions, I find the Asgard 3 to have a surprisingly neutral sound signature, with a slight amount of warmth. It's not as warm as other Schiit amps I've owned in the past, which kind of threw me off, and I actually think it has softer transients and a more relaxed low end.

When I plugged my ZMF Verite into the Asgard 3 and the ADI-2 DAC, I surprisingly found the ADI-2 to have more punchy bass, which sort of blew my mind, however I still liked using the Asgard 3 for it's more softer tonality since I can find the RME ADI-2 DAC to be fatiguing after a while.

The low gain switch on the Asgard works really well for IEMs, and gives you some play on the volume dial. The high gain has audible noise on higher sensitive headphones/iems, and you can definitely hear hum on any IEM I tried. That shouldn't really be an issue as the only time you'll need to switch to high gain is when you use a headphone that isn't sensitive and has higher impedance, and such as the case with my use of the Verite and the Hifiman Arya.

Anyway, for $199, I find the build quality outstanding and nothing even comes close to it that I've tried in this price range. It looks great, the knob is solid, and I didn't hear any issues with channel imbalance at the lowest rungs. The switches have nice click/clack sounds and feel great.

The Asgard 3 also has optional add-on expansion slots for adding a DAC and Schiit provides at this time the 4490 USB DAC as well as their multi-bit USB DAC. I decided not to include either one in my purchase since I already have the RME ADI-2 DAC.


The latest "Walkman" from Sony are a set of Android-based digital audio players with streaming capability in the NW-100 and NW-ZX500 series walkmans. I purchased the NW-A105 now, though after going through the first day or so of having it, I may be opting to get the higher priced ZX507.

First off, the A105 is priced at around $349 and comes with 16GB of internal storage and has a microsd slot. I am using it with a 200GB card now and had no issues loading music. It only has 3.5mm single-ended output and is limited to just 35mW at 16 ohm power. So, in otherwords, it's a tad weaksauce. That said, it's enough juice for pretty much every IEM I own with the exception of my Unique Melody ME1 planar in-ear, and that one can get plenty loud, but just sounds awfully anemic, especially when compared to the iBasso DX160 which has significantly more power in it's balanced output. To make things even more pointed, the Apple USB-C to 3.5mm dongle has more power than the NW-A105.

Still, when used with just IEMs, this thing actually sounds pretty good, and it has a neutral to neutral-bright tonality to it. The soundstage is open and presents a clean, detailed playback.

The battery life is pretty bad so far. I've disabled most apps and turned off syncing and location services, but I'm finding battery drain to be still pretty high. I also haven't had luck unlocking the bootloader to see if I can mod it as well.

Another negative, and I've already pointed this out above, is that this isn't the DAP you're looking for to use with over-ear headphones that need more power. The Verite required the amp to be maxed out and it sounded really bad. I didn't even bother trying the Hifiman Arya with it.

But the good news is that bluetooth works great and no issues with wifi and bluetooth range that is an issue with a lot of the Chinese-based DAPs I'ved used more recently, with the worst being the iBasso DX160 where I can't go more than 5 feet without stuttering during bluetooth playback.

The other thing to note is how small and how cute this little player is. It fits inside my palms with ease and it's roughly the size of the small iPhone SE's screen footprint. That's small! It has full android 9.0 and play store capabilities and I had no issues using Spotify and Qobuz as well as Niagara Launcher and other android apps, and using it was quick without any lag.

Now that said, I am looking at possibly returning this and getting the NW-ZX507 as it has a little more power and balanced options for doubling it's power output while still retaining a slim feel, albeit taller with the same screen size. We'll see....

Started at 100%, continuous flac playback except 15 mins of qobuz streaming for 7 hours and its at 44% with 1 hour screen on time.

During the time I used qobuz, the battery % dropped pretty quickly. I also noticed that using Direct Sound mode was much more battery efficient than turning it off, but not using any of the DSP functions.


I've disabled a lot of apps and turned off location, syncing, etc.