The Shuoer Tape has a black full metal shell with a shape that is reminiscent of the Campfire Andromeda. It appears to be vented in the back but rest assured there is very little sound leakage. The Tape utilizes an MMCX connector and comes with a braided 2.5mm MMCX cable. Included is a short 2.5mm to 3.5mm adapter. Just like the Shuoer Singer, it's interesting that Shuoer has decided to include a 2.5mm cable with an adapter instead of just a 3.5mm cable.

In terms of accessories, the Shuoer Tape comes with a circular green metal screw case. Accessories are limited to two identical sets of silicon S, M, and L tips. I'm not a big fan of the quality of these silicon tips but they work well enough.

The fit of the Tape is fine for me though it does feel a little shallow. Isolation is decent enough for being vented but likely won't be enough for those in very loud environments. 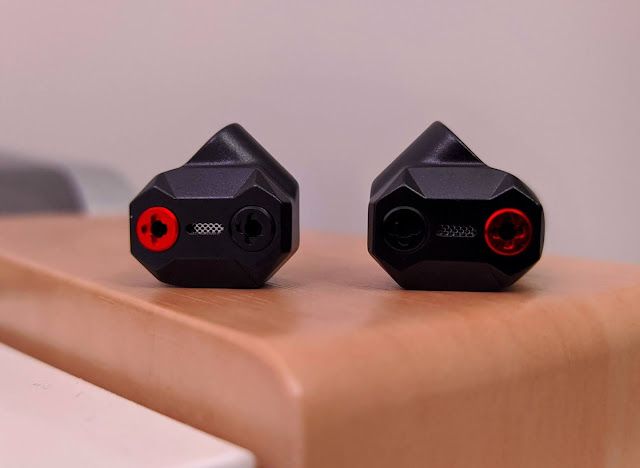 The Shuoer Tape sounds classically V-shaped to me with a notable bass and treble presence while having thin mids. What's interesting with the Tape is that they manage more treble extension than a lot of IEMs do and adds an interesting dimension to it's sound. One thing that I did note was that the Tapes felt compressed to me; large choruses and outstanding transients feel a tad squashed and lacking it's usual energy. It's not bad but enough to make me think of it.

The Shuoer Tape's bass is tastefully elevated for a V-shaped IEM. I think it finds a nice balance between overtly bassy while still remaining a solid bass presence. Additionally, the Tape's bass is well controlled and does not bleed into the mids; it's quick and a little light. Despite the magnetostatic driver, the timbre of the bass feels quite close to a traditional dynamic driver. The Tape has good subbass rumble and doesn't roll off at the lower ends. Bass quantity does slope down as it approaches the mids but still enough remains to keep mid-bass clarity for bass guitar lines. If I had to nitpick, I'd say the Tape's bass is a little on the soft side and does slightly blurry at times.

There isn't much to say here. It's thin. Other than that, can't really complain about instrument tonality. The magnetostatic driver continues to show good speed and prevents the Tape from sounding muddy. There is a larger upper mid elevation that gives the Tape have a forward slant to it. The upper harmonics of stringed instruments are slightly exaggerated and brings out a good amount of clarity while vocals stand out clearly in the mix.

The most notable thing about the Shuoer Tape is its treble. It's immediately apparent that it has a solid amount of treble extension. There is a "sparklyness" to the sound that may be a little understated but present nonetheless. I quite like it as it adds flavor to music that partially goes missing as the vast majority of IEMs that start to roll off at the upper end. Yet at the same time, I wouldn't call the Tape bright. It has a minor dip in the lower and middle treble compared to the large upper mids boost. This prevents the Tape from having sibilance in the vocals or sounding shrill. While the dip in the lower treble does mean the crisp attack of the hats/cymbals are diminished, the Tape makes this up with a clearer shimmer and decay. That said, the Tape does sometimes sound a little brittle in the treble.

The Shuoer Tape has a surprisingly wide stage, likely thanks to it's vented nature, but lacks adequate height or depth to have a well rounded stage presentation. Imaging makes good use of the wide stage and places different instruments in the stage nicely with good nuance.

Resolution is solid for the price. The extended treble response adds small details that are normally hidden (whether or not this is "fake" resolution is another topic). The upper mids boost additionally accentuate note definition. Separation is quite good as well especially when combined with the wide soundstage. 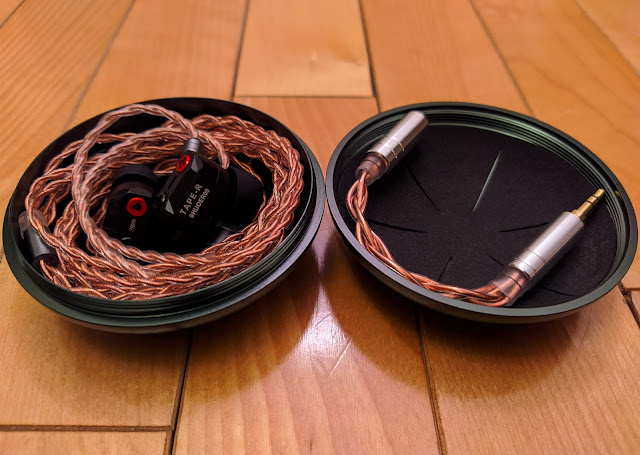 The MoonDrop Starfield is bassier and much more thicker than the Shuoer Tape. Resolution is also a clear step up on the Starfield despite its very tame treble response. Tonality in the Starfield also feels more realistic, if a lot warmer. Where the Tape gains an edge is in the wider soundstage it brings to the table and of course, its treble extension. The Starfield's staging is more well rounded with height and depth if smaller.

While the Tape is thin, the T4 is lean. I find that the T4 has better clarity and resolution compared to the Tape. Treble wise, the T4 sounds brighter in comparison to the recession in the lower and mid treble in the Tape that keeps it tamed. While the T4 is no slouch when it comes to treble extension, it can't beat out the Tape.

While the Shuoer Singer doesn't compete in the same price bracket, I thought I'd compare the two Shuoer budget IEMs. Overall, the Tape beats the Singer pretty handily. It has better resolution, better sound stage, and better tuning. The only place where the Singer has a bit of an edge is in a heavier hitting bass response.

To me, the WG T-one is the closest comparison to the Shuoer Tape. They have about the same technical ability in terms of resolution and separation. The WG T-one trades a wider soundstage for a more well rounded one much like the Starfield. Treble wise, while I like the Tape's treble extension, the WG T-one does a better job of presenting the delicacies of the hats/cymbals. Thus the choice between these two IEMs comes down to the tuning. I enjoyed the balanced tuning of the WG T-one more than I did the V-shaped nature of the Shuoer Tape during the week I spent listening to the two. That said, the Tapes do sound more unique compared to the WG T-one which can sound a little generic. While they both sound pretty good, they don't quite match live up to the sound quality presented by the Starfield or the T4.

If you like a V shape signature and "sparkly" treble, the Shuoer Tape is a good choice. I do want to go back to the start of the review where I mentioned it sounds slightly compressed. This slight compression makes the Tape feel less lively to me than it's competitors, making it easy to tune out at times. Otherwise, the Tape does bring good to the table. It has solid technical ability for it's price, treble extension beyond the vast majority of IEMs, and a wide soundstage. I don't think it's the standout choice for $130 but does establish itself as a reasonably competitive option.