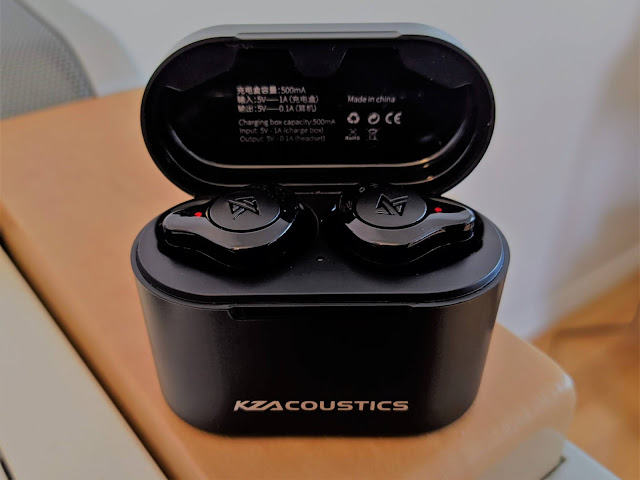 Hi everyone, this a review of the KZ S2, a new TWS that just launched on Indiegogo. Early bird pricing is $30 and MSRP will be $50. Full disclaimer: I received the KZ S2 from Linsoul for the purposes of this review. I do not otherwise get any form of compensation from them.

The KZ S2 sports a hybrid 1 DD + 1 BA configuration, that is to say, a dynamic driver and a balanced armature. It additionally has a touch sensitive button on the faceplate for controls. The matte plastic charging case uses a USB-C connection. Accessory wise, it's quite stingy. It comes with 2 sets of identical M size tips and that's it. Fit and in-ear stability is quite good for me, no complaints there.

As a TWS set, it boasts many features you'd expect from TWS IEMs. Below is a list of some of them them and my thoughts on each of these features:


Overall, the KZ S2 provides a fairly full package of TWS features you'd expect from more expensive TWS sets. For $30 (or $50), it's hard to complain for what you get. There are obviously some cut corners and doesn't have a "premium" feeling but overall it meets a reasonable standard.

My initial impressions of the KZ S2 was... not great. Coming from 3 weeks of 8 hours a day HD600 use, the step down in quality was very significant. But after about 2 hours of use, the KZ S2 sounds pretty decent for it's price (thanks brain burn in). It's a V-shape signature with a sizable recession in the mids and can be bright. I would avoid hard rock or metal on these as the cymbals can start to become too much to handle.

As with a V-shaped signature, the bass is elevated. I found the bass to be about right for a bassy presence without being overbearing or overly bloated. It has a subbass roll-off starting around 40-50Hz and leans a bit more towards the mid-bass. The bass guitar has a surprising amount of note definition due to the exaggerated upper harmonics in the treble. Drum toms sound full and meaty. No complaints about tonality in the bass department for the most part.

There's some incoherency in the lower mids at the crossover between the DD and the BA that can make certain tracks sound smeary. While the lower mids retain some presence from the boosted bass, once you get into the central mids it's undeniably thin, casting a slightly inorganic sheen. While it does affect the overall tone, it doesn't sound hollow to the point of disrupting the musical experience. Vocals are generally OK for the most part, though lacking some body. There's an abundance of upper mids that helps maintain an overall sense of clarity.

Treble is similarly elevated like the bass is. It has a couple of peaks and can be bright depending your sensitivity and music. I didn't have sibilance issues with it but likely a number of people will. Very few IEMs can properly reproduce the complex sounds of the hats/cymbals and the KZ S2 is no different. For most, this will be where most have an issue with. They sound tizzy, occasionally splashy, sometimes metallic, and can be bright. If not listening to tracks with a lot of cymbals or hats, well the problems go away. I would recommend avoiding hard rock or metal genres on these. There is some decent air in the upper treble, preventing the KZ S2 from sounding suffocated. Overall, I personally don't have an issue with the treble but if you have a deal breaker, this will be it.

While I don't really have an issue with the overall timbre of the KZ S2, resolution leaves a bit to be desired. To be completely fair, this may be due to the fact that it's wireless using the SBC codec. Soundstage and imaging are about what you'd expect from IEMs, so no surprises there. Technicalities wise, it sounds like a budget set on par with other KZs.

Sabbat E12 Ultra: The E12 is about $80. The BT connection on the E12 is rock solid and maintains about a 6 hour charge. Too bad it sounds quite muddy to me and acceptable only for podcasts at work and avoid music with them.

KZ E10: This is one of KZ's previous wireless attempt and costs $60. It actually sounds better than the S2, with a more refined, neutral profile that's less exciting than the S2. Too bad the connectivity on it was very poor to the point of unusable and they stopped selling the E10s for some time. Additionally, it's not actually a true TWS since it uses an earhook system with a case the weight of a brick (mild exaggeration).

If you're talking about a $30 (or $50) TWS set from KZ, you're talking about an exercise in value proposition. Does the KZ S2 check enough boxes to be worth your coin? The answer is yes, especially if you don't already own a TWS set. These are about as cheap as you can get for a TWS IEM that has all the included features. For $30 the KZ S2 is definitely worth it. At $50, it's still worth a look into. Or put another way, the price of great budget choices like the Tin Audio T2 or the BLON BL-03 starts at about $30-35. The KZ S2 provides the conveniences of TWS with an acceptable sound quality that's on par with decent budget IEMs. It meets bar as the minimum a reasonably good TWS should be. Anything below and I wouldn't bother. Overall, get it as a beater, a starter TWS set, something to use in bed, as a gift, whatever. It's cheap, it works, and it sounds better than I expected from a wireless set. I know I'll likely be using them quite for some time to come in the future.