The Dunu Luna is an all-new in-ear monitor which features Dunu’s latest driver: a 10mm beryllium foil dynamic driver with a polyurethane suspension that allows for cleaner and more controlled pistonic driver movement. The Luna retails at $1699, putting it at the top of Dunu’s current lineup, well establishing it as their product flagship.

The Dunu Luna was provided to me by Tom of Dunu as part of a loaner tour on Head-Fi. I will be shipping this unit to the next person in-line immediately following this review release.

I’ve gone over beryllium drivers before, in my recent review of the Focal Utopia, as well as my very own headphones, the ZMF Verite, although that Verite driver is a coated-beryllium driver. In this case, Dunu uses beryllium in a rolled-foil form, making it the first pure Be driver that I am aware of. Others, like the Shozy Form 1.1/1.4 that I’ve also reviewed, are Be-coated drivers over a traditional plastic driver film.

The Dunu driver is only 10mm, which is smaller than their DK-series of hybrids, which feature a 13mm Be-coated driver. With the smaller driver also comes a smaller shell, this time machined from a titanium alloy, which is finished in a silver-matte appearance and flows quite nicely with the Luna name and theme. It’s a very simple, yet modern and sleek design which I really enjoy, and looks right in-line with the other Dunu IEMs.

The smaller fit does present a small challenge in getting a good fit and deal. Having small ears, I usually don’t mind and favor smaller IEMs, but the Dunu Luna’s small round shape and shallow nozzle length made me always worry about it losing seal or dropping out. Now that said, once I established a good combination of fit and seal, I never really had issues of leaking sound or it falling out of place, but the mental thought of it was always in the back of my mind because it didn’t feel very secure. I ended up with using Size Large Spinfit tips with this earphone, and they are also included in the unit. 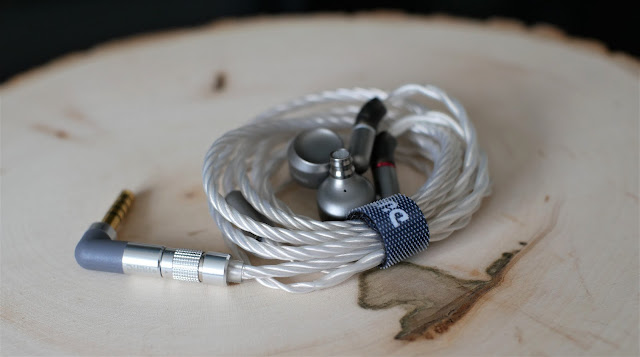 So along with the Spinfit tips in all sizes, Dunu also includes their own generic style silicone tips, as well as foam ones. The Luna comes with a large carrying case that has plenty of room for extra accessories and a small Digital Audio Player if you so choose. The cable is a light silver, almost white color with mmcx connectors to the Luna, and Dunu’s patented quick connector on the source end. The package comes with all 4 available connectors – 3.5mm, 3.5mm balanced, 2.5mm balanced and 4.4mm balanced. It also comes with a 6.35mm adapter. 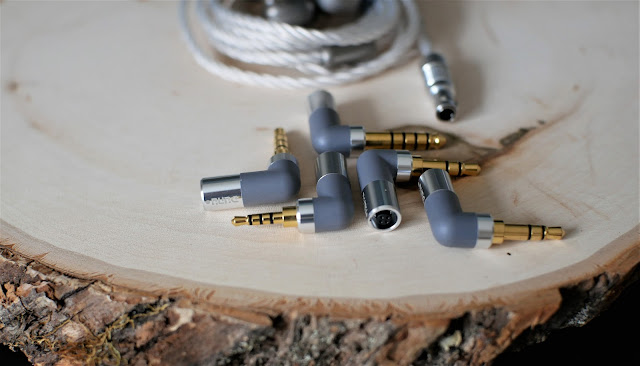 The Dunu Luna has a general sound signature that is warm, punchy while having a focused energy in the lower treble that some may find brighter than neutral. In total, I find it to have a nice balance of punchy bass and a tasteful upper boost, although it can be occasionally sharp. Let’s talk about it a little more in detail.

When I popped on the Dunu Luna and some tunes, my first impressions where that it was very resolving, with a good amount of detail retrieval, and a surprisingly punchy and warm sound, that I may not have expected just from staring at the graph and focusing on that lower treble peak. Yes, there’s no denying it’s not present, but it’s not nearly as bad as it may look. I also found the Luna to have quick, yet very controlled transient response that I’d expect with a Beryllium driver.

Bass levels are just above neutral, with a bigger focus on mid-bass than sub-bass although it can reach low. There is definitely a punchy attitude to this IEM, although its slam factor isn’t gigantic, it can still provide some when needed. Like I mentioned, bass response on the Luna is very agile, providing good clean and fast response that is good to bring out micro-details from songs. Texturing is good, and overall, I enjoy the bass, though I would prefer more focus on sub-bass than the punchy and warmer nature of the mid-bass boost of the Luna.

In “Cherry-Coloured Funk” by Cocteau Twins, the very opening of the track kicks off with a powerful bassline that is played back with the expected grand nature on Luna. This attribute does lend itself to the mid-bass and warmer style of the IEM, however I did find Liz Fraser’s vocals to be a bit too strained and peaky. Her voice is ethereal already, and headphones and IEMs that exaggerate upper mid-range and lower treble frequencies can make her voice stand out and become overly harsh and fatiguing and the Dunu Luna does hover that fine line.

In Chrvches’ “Get Out”, I found the general sound was very punchy although only had a decent amount of slam. During the bridge, however, I felt the bass and mid-range textures were presented very well on Luna, but again, my main concern is that the chorus, where Lauren Mayberry echoes her “Get Out” song title over and over again, to sound a bit bright and fatiguing.

This isn’t necessarily going to be a problem for every song or style of music, but I do find that the Luna’s 3-6KHz region is over-emphasized and I wish it was tamed down a few decibels so it wasn’t so far removed from the midrange.

This extra presence isn’t always bad though. In the bluegrass pop tracks, “Gravity” and “Restless” from Alison Krauss & Union Station’s early 2000 record, “Lovely Runs Both Ways,” I find that the strings, whether they are guitars, mandolins, dobros or fiddles – they have a nice exacting sound that has nice harmonics that flow and are well conveyed with emphasis. Yes, it can be a little sharp at times, but in general, I don’t find it troublesome at my lower listening volumes. In addition, here, the angelic sound of Krauss’ famous voice is placed in the entire spotlight.

The mid-range has a little bit of warmth to it, which I wasn’t necessarily expecting. It’s not thick by any means, but it has enough body that it doesn’t sound thin. When I listened to some live tracks by the band, Brad, the late Shawn Smith, sounded excellent. His bravado voice carries a lot of the energy I expect. His vibrato-style of singing comes in with good detail and texturing. Stone Gossard’s guitar-work is also clean and precise, and imaging seems to match what I see on-screen well.

In Air’s “All I Need”, vocals sound more forward than other in-ears. The synth melodies the French band produces are very energetic and occasionally shrill, while guitars are well-defined. This song has a lot of textures and layering built-around the keyboards and guitars and I find the Luna plays them back well, however, music like this can be fatiguing over time.

“Rain on Tin” by Sonic Youth, however, sounds excellent. I wish this band were still together, but alas, we still have their wonderful back catalog to choose music from, and like I’ve mentioned before, the Luna’s strengths are its precise string-play, good instrument separation, and (for better or for worse), it’s lower treble harmonics. With Sonic Youth’s abundance and mixture of electric guitars, all on different filters and effects, playing various riffs in full harmony, the Luna does a good job of separating the guitar chaos into a coherent rock song. 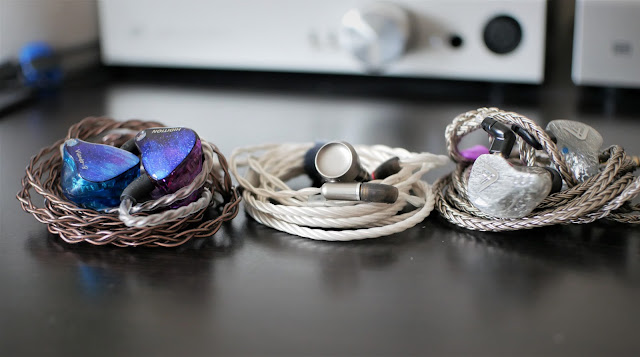 The Dunu Luna is a single dynamic flagship IEM and so the comparisons expected are probably to other higher-tier solo dynamics. Unfortunately, I do not have any on hand to demo side-by-side. From memory, I find the Luna to be a cut above the Campfire Vega and Atlas and unfortunately, I have not had the chance to listen to the other new beryllium driver IEM, the Final A8000. While both the Vega and Atlas have much more bass emphasis, I find both to be a bit muddy and lacking clean texture. The Vega is also a bit harsh and sibilant, and extremely fatiguing to me. The Atlas seemed to sound different from the first time I heard it and the following times. That said, I think it’s respectable, but still falls short in the major technical areas that the Luna stands out on.

When comparing to IEMs I do have on hand, I find it’s closest in sound to the Hidition Viento, which I now own both in universal and custom form. While the Viento is a 4-BA IEM, and does not feature a dynamic driver, it does share similarly large pinna gains, though it’s not as boosted in 5KHz as the Luna is. I find the Viento to have a more natural tonality than the Luna and perhaps even image a little better. The Luna is punchier and slightly warmer, and generally presents bass more naturally though both are on the quicker side of things. Viento actually reaches deeper in sub-bass though. In terms of just raw resolution, I think the are both quite close with perhaps a small edge to the Luna, as it mixes both clean raw resolution with a more natural harmonic sound, even if it’s slightly bright. I still prefer the Viento over the Luna though, and that’s based on tonality being more accurate and the better subbass extension. The measurements between the two are below, but please not that the Viento-B in black is the universal fit and not the custom-fit.

The qdc Anole VX impresses more in resolution and bass response, while the Luna has a nice well-controlled punch sound that the VX sometimes doesn’t have – punchiness, as opposed to control. That’s something the VX may top Luna in, though again, it’s close. The VX’s bass is weightier and has nice subbass rumble, while also have nice clean texture and resolution, something that the Luna can do too, but without as much weight. I think both have slightly off-skew tonality when it reaches the treble region, with the Luna overly bright around 3-5KHz, and VX having a sharp peak at 7.5KHz which, in both cases, can cause some music to sound a bit plasticky or sharp. 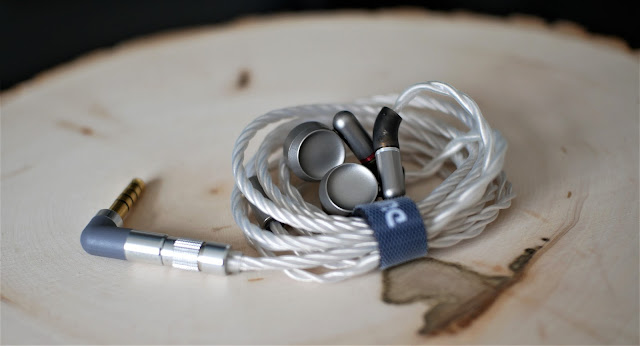 I did not know what to really expect when I got the Luna in. I had not really looked at other reviewer impressions nor had I taken a deep look at the frequency response. I always wondered how a full Be driver could behave in an IEM after experiencing the benefits on the Focal Utopia and Stellia in full-sized headphones. For the most part, I think Dunu succeeded with many of the technical aspects of in-ear audio. I find the Luna has good resolution, transient response, and a nice punchy bass.

Where it does lack is overall timbre and tonality. I wish there was just a little bit more sub-bass boost, and a little tamer lower treble. It’s not as bad as other IEMs I’ve tried in the past, but it can be a little fatiguing at times. When I gave this feedback back to Dunu, they mentioned that dampening the driver to tune down the treble peak would reduce a lot of the technical aspects that the Be driver and limit the potential of the driver.

As it is for most things, it’s a game of compromises. Just like the qdc Anole VX, which excels in technical performance, it does give way to some minor tonality aberrations. The Luna’s trade-off between technical performance and the minor treble peak and inconsistencies is a question for each listener to answer. Besides that, I find the overall package of the Luna to be great with the big complement of accessories, a large well-designed case, and a beautiful cable with quick-connectors for every source.