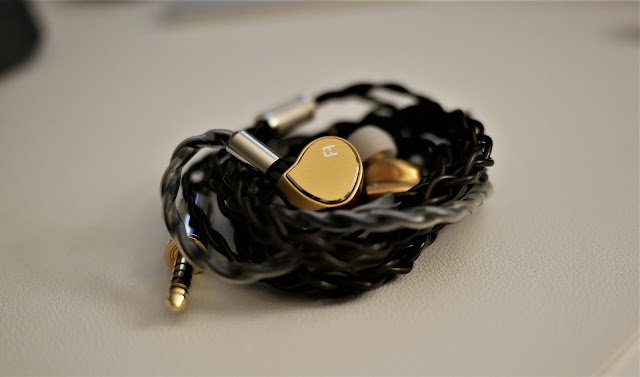 F-Audio is a Hong Kong-based company that started off in 2014 re-shelling in-ear monitors and then developed their own small line of universal and custom IEMs. The company currently has 6 total models between their custom and universal arsenal, with two being available in both fits. This specific quick review will go over their top-priced Major (~$1350 USD), from their universal lineup.

The F-Audio Major was loaned to me by fellow Audio Discourse member, Rush, to try out and provide impressions to over a couple weeks.

The Major’s shell is a machined aluminum housing that kind of looks like a comic quote cloud to me. It’s gold-anodized and has a nice feel and heft to it, though also small and easy to wear. The nozzle is small and shallow, so for me, it pairs better with larger silicone tips. The connector is of the 2-pin variety.

The IEM features a single dynamic driver; however, it has two diaphragm materials. The outer layer is a fiber-based diaphragm, while the inner layer is titanium foil.  The fiber layer is designed to control the low end of the frequency response, while the titanium handles the upper-end.

The F-Audio Major has a V-shaped sound to it that with an emphasis on bass and treble, while the mid-range is only slightly recessed. While the basic sound signature isn’t unique, it does present music in a way that I find a little different than what I am used to.

First off, I find the treble has some peaks that don’t play well with my ears. There are definitely some strained and ringing sounds in the lower treble that exudes some abnormal sounding cymbal crashes and hat hits that I feel sound odd. In my Alison Krauss & Union Station listening, it really stands out and is quite fatiguing as the harmonics of all the stringed instruments of bluegrass paired with the angelic voice of Krauss really make this IEM a bit fatiguing and sharp.

In some ways, I also find the treble to sound a bit veiled too, or perhaps the term “grainy” comes to mind. This may have to do with such a large peak at 5.5KHz and such a drop off afterward followed by another peak between 8-10KHz that creates an uneven and somewhat strange treble sound to me. It sounds like everything prior to 2K sounds nice, warm and impactful, and everything afterward sounds quite average to strange.
That’s not to say everything is bad.

The low end is beefy. It’s warm, thick, and engaging. If the treble wasn’t so peaky, I’d almost consider this a dark in-ear, however, those treble spikes really make this more a V-Shape, albeit with hints of darkness. Back to the lower end. This IEM seems to play well with rock music. I found my 90’s alternative music really stood out on these.

Alice in Chain’s Rooster, for example, sounds really good. Given my normal listening gear, I am not normally listening to Layne Staley’s voice with such deep bravado, or the bass guitars and kick drums hit with power. That said, the snares do have that weird harmonic ringing and deadness to it that I mentioned above.

It’s actually more present in Smashing Pumpkins tracks, where Jimmy Chamberlain uses the cymbals and snare hits more so, such as in Cherub Rock, where it’s predominantly the base of the track. Billy Corgan’s voice doesn’t necessarily sound true either, and sometimes sounds a bit flat, however in general I do enjoy the thicker, warmer, tonality of the Major for a lot of this era’s music.

Pearl Jam for example, sounds pretty good. It also does well with hip hop music. I started listening to Notorious BIG and 2Pac and other rap favorites from the 90s and found the Major to bring back some fun here. There’s also a surprisingly wider soundstage than I thought, and separation is pretty decent, even in these rap tracks. 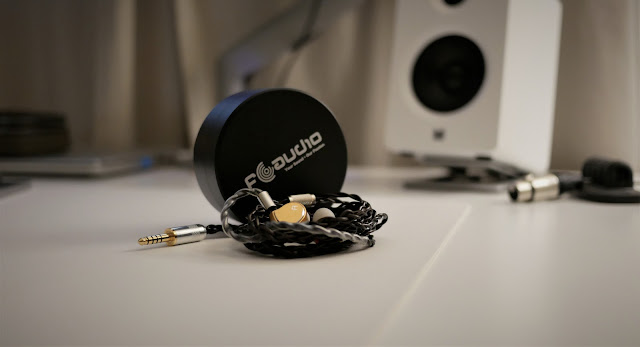 So, while I did enjoy revitalizing my love for 90’s music with my time alongside the F-Audio Major, I don’t necessarily feel it is really my preferred flavor of sound. It’s strays rather far from neutral, which isn’t always a bad thing, but I do find some of the quirks with this in-ear are not very enjoyable for my tastes and my ear anatomy. The treble is too disjointed and too peaky that it ruins a lot of my favorite music and I’m always feeling like something is wrong, off or missing.