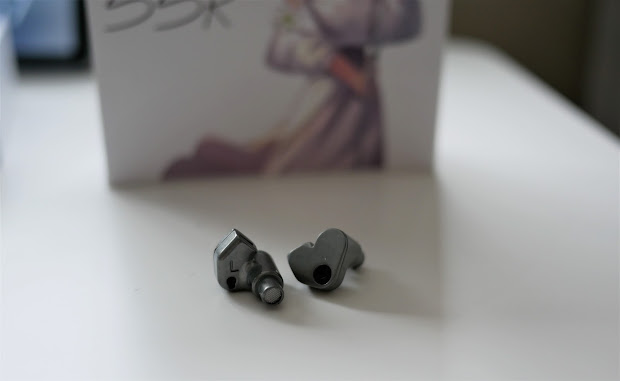 The latest model from Moondrop is the Super Spaceship Reference, otherwise known as the SSR. This new $39 In-Ear Monitor (IEM) is on the lower end of the Moondrop lineup and is a step up in price and quality from their popular Spaceship model.

First off, I was sent this SSR review unit by Shenzhen Audio, who are both an online retailer and distributor of Moondrop and other audio brands. You can find this product on their retail site at http://www.shenzhenaudio.com as well as their storefronts on Amazon and Ali Express. 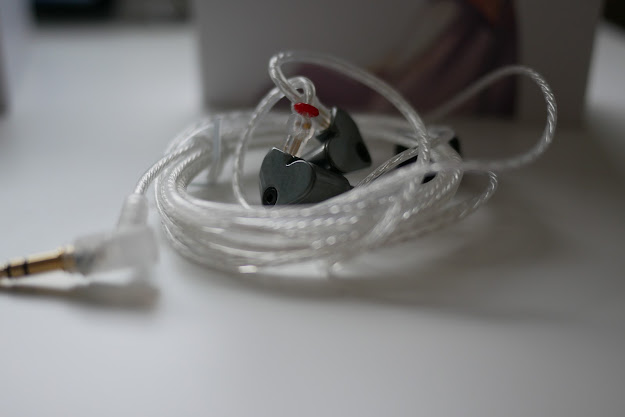 The SSR is a tiny IEM which is made of aluminum and looks to be possibly die-casted. It also has some sort of enamel clear-coat on the outside giving it a glossy appearance and feel to it. The front of the shell has a large torx screw that may be mistaken for a vent in photos, however the vents are present but located on the ear facing side of the shell and next to the nozzle. The small appearance actually does fit very well in my ears and kind of floats in your ear making little to no contact, depending on your ear shape, and is pretty comfortable overall.

The IEM houses a single beryllium-coated dynamic driver and uses recessed 0.78mm 2-pin connectors. The cable that comes with the SSR is a silver-colored and silver-plated copper wire that winds up nicely and is surprisingly very easy to maneuver and handle, and doesn’t feel to springy and would be hard to knot up.

The Moondrop SSR can be described as a warm diffuse-field tuned IEM, which features a mid-bass focused lower end and a typical diffuse field type tuning which peaks up to 3KHz and gradually drops down and rolls off in the upper treble range. This IEM can be described as a possible reference tuning but it does lean a tad bright and possibly shouty with it’s large rise in the upper mid-range.

The low end is quick, punchy, and very tasteful, while having enough of a bass boost to provide a warmer than neutral sound. It doesn’t stray towards the rich, thick, and gooey type sound in the bass and lower mid-range however, and I believe that is partially due to the upper mid-range rise. That said, I find that the low end is acceptable for most rock music, and has a nice bass response that falls in-line with how much bass I like. It paints a clear picture without bloat.

The mid-range is predominantly dominated by that 3K peak with vocals pushed rather forward and occasionally sharp, particular with female vocals by much more forward and slightly strained. I found this less of an issue when switching to foam tips, as those typically tame some sharpness in my experience and seems to work here as well.

When I listen to Chris Stapleton, who’s deep gritty voice is backed by his roots-style americana rock, I find his voice sounds well defined and with enough power to sound accurate to my ears. Guitars plucks do come across a tad forward perhaps, but nothing that I’d consider fatiguing or sharp.

Treble on the SSR is actually balanced and generally smooth, however still rises a little higher than I prefer, especially in the lower treble range. Some may find the 3K rise to be fatiguing due to shoutiness or being overly sensitive in that area, with singers like Alison Krauss and Lauren Mayberry as prime examples of female vocals sounding a bit too overly bright.

Chromeo’s funky-dance songs are examples of music that can become fatiguing. They beats feature a lot of high-hat-type hits and snares that can seem a little too extreme for my ears. The bass lines do sound nice and clean, with punch, and the accentuated focus on the lower treble does make this song a little more exciting. The bass isn’t as powerful in the slam factor as songs like “Must’ve Been” deserves though.

My impressions on some of its more technical aspects are actually very positive for this $39 price tag. Like I mentioned before, the punchy and quick bass doesn’t seem to have any issues with muddiness and offers a clean bass representation that has some weight to it. The mid-range does steer towards the upper range however vocals and instruments do come in with good representation and clarity for this price point.

Imaging is at least better than average to excellent in this price point and is one of the better imaging IEMs I’ve heard under $100. This probably helped by the SSR having a decent soundstage and some depth. I was able to pick out instruments across the soundscape that wasn’t just in my head and instrument separation is actually a strong suit for this IEM even when I threw on songs with buzzing guitars and a lot of noise, like Sonic Youth’s Sonic Nurse record. 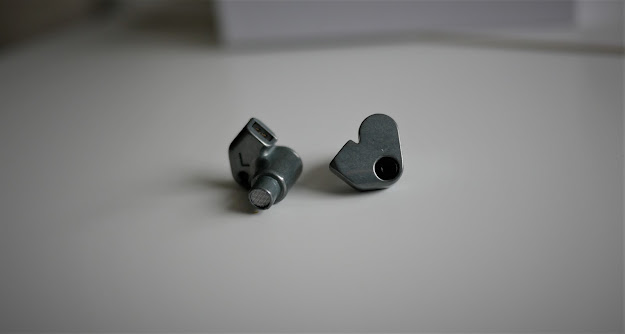 So where do I put this in the Moondrop Lineup? Without ever hearing the Crescent and Starfield, it’s a little hard to really compare it against the closest in it’s price range outside the ultra-budget Spaceship. In that case, the Spaceship is clearly outdone by the SSR and this marks a similar but improvement upon the $20 Spaceship. While the general tonality is similar, the SSR has a more balanced sound to it with less muddy midrange and improved fit makes getting seal a lot better. The technical capability is much improved with the change to the Be-coated driver and the new housing design.

I think the SSR is still a step or two below the KXXS and Kanas Pro though. Those two IEMs have a much easier to appreciate tonality that will cover most genres and individual preferences more so than the brighter tuned SSR. In addition, I think the shell design is better with an overall better package.

That said though, when comparing this IEM to it’s peers, I find this to fall somewhere in-between the V-shaped BLON BL03 and the diffuse-field targeted Tin T2. The SSR has a little bit warmer and punchier bass signature than the T2 but doesn’t get to the occasional muddy and elevated nature of the BL03. The SSR actually may be brighter than the T2 and the BLON however, but doesn’t have sibilance issues that I find occasionally present in the T2 and BL03, as it’s treble is tamed down a bit in the areas that I find most sensitive to sibilant consonant sounds.

The biggest knock against it is that it does have a large emphasis in the upper mid-range and lower treble that may not appeal to some, and that’s a legitimate thing to be wary about, and it doesn’t necessarily extend that well down to sub-bass and upper treble range, but it works decently for most music.

Finally, I think the SSR is definitely well priced and can compete against others, with consideration for each individual’s personal preferences and tastes. Either way, it’s a nice little package that fits well, has a unique design and good build, and really comes ready to use.