I’ve been hanging on to the Thieaudio Voyager 3 for quite a long time now and I’ve been hesitant to review it for a few reasons, but now that I bought it’s sibling, the Thieaudio Legacy 3, I feel like its time to do a joint review of these two 3-driver in-ear monitors by Linsoul’s house brand, Thieaudio.

First off, the Voyager 3 was sent to me by Linsoul for a review earlier this year, while I purchased the Legacy 3 myself. The first set I received was actually “messed up”, which I’ll explain later as it’s kind of important, and I’ve received a new replacement unit from Linsoul.

The Voyager 3 is a 3-balance armature (BA) only setup, and features two tuning switches that provide 4 unique tuning options. The Legacy 3, instead, only has two BA drivers but comes with a dynamic driver (DD), making it a 1-DD, 2-BA hybrid IEM, while still retaining two tuning switches. As a quick reference, the Voyager series is their multi-BA lineup, while the Legacy series is their hybrid lineup name. 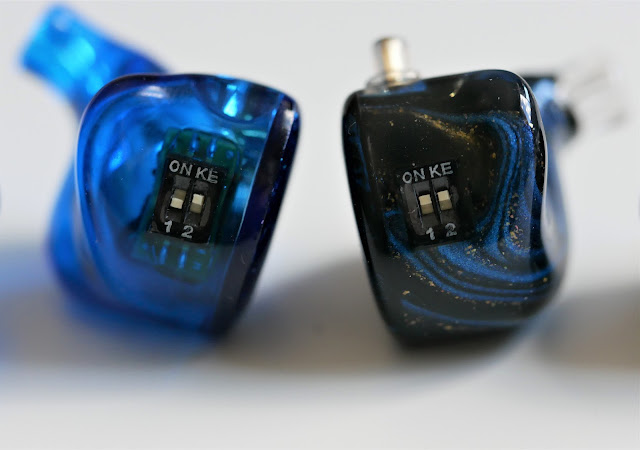 After listening to this IEM more, I did discover that playing this IEM at higher volumes (80dB+), that I did not appreciate the sound quality as much as my normal listening volumes of around 65-75dB. It brought out a much more grainy and muddy and low-resolution sound out of this IEM. The review moving forward from here is based on my moderate listening volumes.

I would have expected both of these to come with similar, if not the same packaging and accessories but it seems like the newer Legacy 3 has a big step up in overall package content, at least in my opinion.

The Voyager 3 comes with a series of tips, a thick braided cable that is reminiscent of many cables you can find online by Yinyoo, Kinboofi, and the like, with appearance to be similar to their 8- or 16- core cable types. The connectors on my V3 unit were qdc-style c-pin connectors. To round it out, the Voyager 3 comes in a metal round case that opens up into two separate pieces. 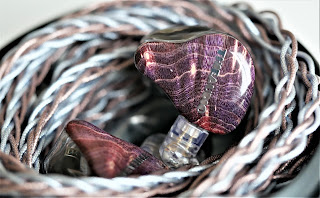 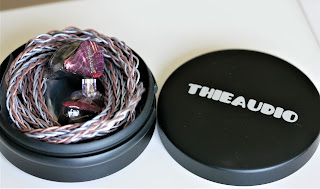 The Legacy 3 also comes with qdc-style c-pin connectors and similar selection of tips. It differs in the cable and case though. The cable on the Legacy 3 is black, and braided as well, but much more flexible, lighter, and thinner, and in my opinion, a much better experience. They feel like a lightweight and more usable version of the Fearless brand cables. The case it comes with is a zippered faux-leather case which looks more attractive, albeit a little larger. 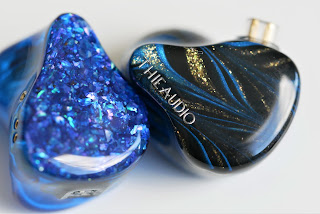 Both IEMs come with similar cards as well as a mobile phone-style pin to change the switch combos with.

Now, this is where it gets a little weird. I originally ordered a special blue flake-themed (AW11) faceplate model of the Legacy 3, but it came in with a defect which I’ll go over in the sound section. This universal shell model came with recessed 2-pin connectors and standard 2-pin cable. It’s a little odd that the replacement model, the normally available “mystique” theme, comes in a different connector style and cable connector type. The cables itself was the same material and look though.

Both the Voyager and Legacy 3 also fit differently. I felt the Legacy 3 was actually a bit lighter and smaller and fit my ears a lot better where they barely felt they were on and is easily something I could wear for hours. The Voyager 3 was a little less comfortable with its larger sized shell and nozzle angle. The Legacy 3 is perhaps the most comfortable IEM I’ve worn to date, besting even the qdc Anole VX. The Legacy 3 is almost an identical shaped design as the VX but shrunken down a bit, which works very well with my smaller ear size. 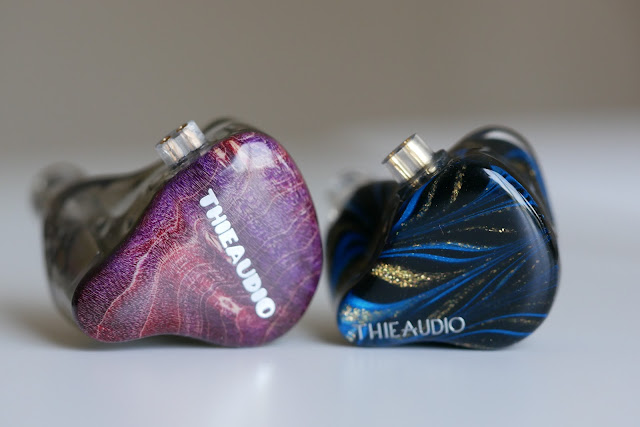 These two Thieaudio IEMs are both kind of U-shaped with a sizeable, yet tasteful bass boost, but differ in how they present the mid-range and treble areas. The Voyager 3, to me, tries to mimic something more like the Campfire Andromeda with a late rise in the treble region around 8-10K which is actually more aggressive than the Andromeda, while also having a similar bass response, which is warm and elevated, and an additional small pinna gain that still feels a little recessed in the upper mid-range.

The Legacy 3 takes a more balanced approach, with a sub-bass boost, down-sloping midrange that presents a warm, rich sound, and a larger pinna gain that’s more in-line with my preferences, and a tamer and generally laid-back treble response. It doesn’t extend nearly as well as the Voyager 3, but I find it is more pleasing and less fatiguing.

Whereas the Voyager 3 seems to take chops from the Campfire Andromeda, I feel like the Legacy 3 takes a lot of influence from the 64 Audio U12t and Fearless Dawn, which are much more balanced IEMs. In some ways, it resembles the U12t very closely in tonality, but lacks the treble extension that the Tia driver provides in the U12t, as well as some of the resolution capabilities of having multiple BA drivers handle smaller amounts of range.

When I listen to both of these side-by-side, it’s quite easy to say that my preferences lie on the side of the Legacy 3. I prefer to have a good strong upper mid-range and a smooth and controlled treble response, and the Voyager 3 doesn’t have either of those. Add to the fact that it’s more mid-bass focused, rather than sub-bass focused, makes it a bit of a disaster in my book. I also found the resolution to be a bit lacking in general, so that along with the sharp and sometimes sibilant sound made the Voyager 3 not so pleasing in my book. Some may enjoy it for the treble lift and the clarity it brings, which definitely is something that the Legacy 3 sometimes lacks, but for all-around listening, the Legacy 3 beats it in spades.

I think the Legacy 3’s tonality is very good, and has a really good combination of raised bass and strong mid-range and soft, but present treble. It’s missing upper-treble extension however, and this make some instruments such as violins, some higher-frequency wind instruments, and cymbals sound a bit blunted and dead at times without their full harmonic range audible. With a small bump of about 4-5dB at 12-16KHz, this can be remedied for the most part.

Now, before I go into too much more detail about the Legacy 3, I want to make a quick point about tuning concerns and possible tuning changes that may have occurred. As mentioned before, I bought the Legacy 3 originally in a blue flakes faceplate theme. It came to me with channels very mismatched. The left side had a large dip between 4-5KHz while the right side had a smaller sloped decline. This was quite audible in some songs and my first impression was, “where did the lower treble go?”

I soon did some research and determined that my left side, the one with the large dip, matched another reviewer’s measurements using the same coupler system. So, I thought my right side was incorrect. I contacted Linsoul and got a replacement sent out and re-measured it.

The good news was that they had good channel matching this time, but the tuning did not match the Left side or what another reviewer had measured before in his review, nor did it match my original right side. It was somewhere in-between. Soon after this, other reviewers with measurement rigs got their hands on this IEM and performed their measurements and 2 others matched this new set I got as well, so I am led to believe that perhaps there was a silent revision sometime after release, or maybe I just got a bad set.

Anyway, so with that out of the way, my review is about the tuning that I have today and primarily with the switches both On/On, which looks like this:

And back to my original thoughts – The Legacy 3 is well-balanced and presents a very good sound signature that I think competes well with Moondrop’s Kanas Pro and KXXS sets. In fact, I think the default tuning with switches off, are very similar to the tuning of these two, but perhaps with a little bit better soundstage and depth and bass response improvements, with other technicalities around the same.

When you change the IEM configuration to having both switches on, the tonality starts to shift towards a poor man’s 64 Audio U12t, with a large sub-bass focus, thicker mids, and a tamer lower treble. Like I mentioned before, it doesn’t have a “Tia” type driver here, which can give it better upper treble extension and so it lacks that sparkle and upper harmonics capability. It also doesn’t have the resolution power to battle a multi-BA set like the U12t, but man it has similar tonality to it that I really enjoy as an all-arounder, and the asking price starts at $119 for a universal and $179 for a custom model. Yes, a CIEM for under $200 that sounds really pleasant. This is such a bargain find!

I enjoy the Legacy 3 primarily with rock and hip hop as well as dance and pop genres. These genres really shine within the limitations of this IEM but the surprisingly well tuned and coherent nature the bass and dual-BA crossover makes this actually fun and not overly muddy. Bass impact and slam are nice with good weight, and has some level of texture that’s quite acceptable. It doesn’t have the best bass control, even for a typical dynamic driver for the most part, but is definitely above average at its $119 asking price.

The Legacy 3 still works fine for orchestral music, jazz, and folk and bluegrass music, however, the treble roll-off does make some of this music a little less realistic and a bit dull at times. This can impact cymbal hits in other genres as well, but I don’t find it nearly as distracting and obvious as I do with acoustic music, since harmonics are typically more audible in these genres. 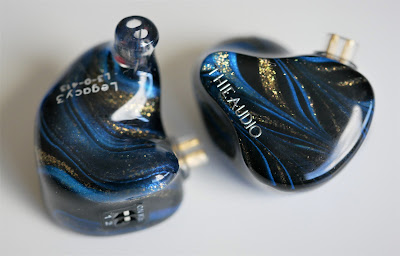 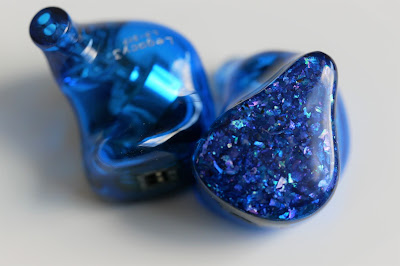 After going through both these IEMs, it was quickly apparent which one I liked and which one I disliked. The Voyager 3 went back into the box quickly after hearing them, and each time I brought them out again, I was left unsatisfied and with ringing ears. With the Legacy 3, I was happy almost every single time I had them on, so much, that I decided to buy a custom pair to go along with the universal set I already purchased. For under $200, a custom with good tuning is pretty unheard of as far as I know. Some companies charge that much just for the custom making process, let alone the entire package. So, the Legacy 3 now becomes the first Thieaudio product that I really like and fully recommend to try out, as long as the tuning stays the way it is on the current sets I’ve seen. 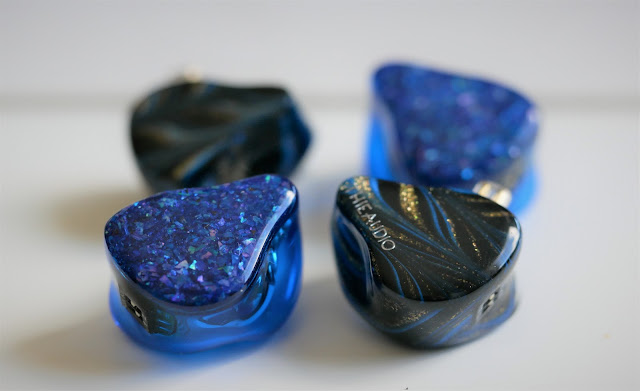