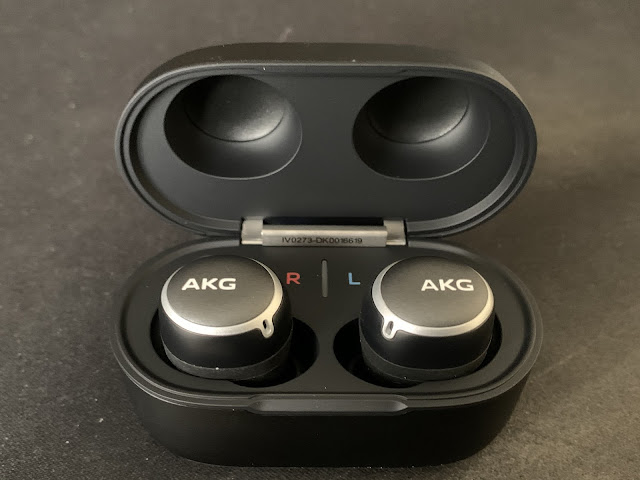 The AKG N400 is a recent release into a highly competitive true wireless (TWS) market. Following the Harman target, the single dynamic driver N400 seek to establish themselves as a tonally balanced wireless option at their current Amazon price of $189.00. Do they compete with the established names like the Galaxy Buds (+), Sony WF-1000XM3, or the Apple AirPods Pro? Let's find out.

Ultimately, the purpose one would buy a TWS IEM is for convenience's sake. As a general rule, for any TWS IEM that you could purchase a specific price, there will be a wired IEM that will sound better. However, for those of you who hate wires, you'll have to pay a bit extra to find a TWS that is able to also sound relatively decent.

That being said, the build quality of the N400 is good in some senses and a bit disconcerting in others. The shells of the IEM themselves are made entirely out of metal, which feels good to hold and to wear. The case itself follows suit in its materials, though the hinge is a bit flimsy and cheap feeling compared to options like the AirPods Pro or WF-1000XM3. As you can see in the picture, the left and right IEM positions within the case are swapped. This is less of a build issue and more of a "why" issue, as I would find myself reaching for the IEM on the left only to realize a second later that I'm holding the right side IEM. Comfort wise, I have had no problem wearing these for a few hours at a time. The N400 comes with three sets of silicone tips, one set of foam tips, and three sets of rubber wings that you can attach on the outer shell. Listeners of every ear shape and size should find these, at the very least, relatively comfortable.

As for features... This is where the review becomes a bit of a mixed bag. The N400's active noise cancelling and transparency mode are very responsive and smooth. Good marks for that. However, the rest of the features that you look for in a TWS (latency, battery life, app functionality) are not as great. In my tests, the latency reached about 100ms when watching videos, which was noticeably distracting. Battery life is 6 hours per charge, and an additional 6 hours in the charging case. This isn't necessarily terrible, but compared to the direct competition, they are able to hold only about half as much battery before the case needs to be charged. Additionally, I found that the position of the IEMs themselves is relatively sensitive in the case, as I found certain times where I closed the IEMs in the case and I opened them to find the battery dead.

The app itself has a decent graphic EQ, but it's extremely finicky to work with. Additionally, as concerns the ANC, the biggest dealbreaker for me is that these IEMs pick up wind noise relatively easily. ANC TWS like the WF-1000XM3 also have wind noise issues, but they also possess a specific ambient sound control mode that reduces wind noise. This issue can be fixed on the N400 by simply turning off the noise cancellation, but as of the time of writing there are no gestures you can program into them that allows you to easily do so. You have go into the app every time you want to disable ANC.

The relatively lower battery life, latency, and wind noise issues alone are enough for me to not want to use these as a daily driver, especially considering how I mostly use my IEM's outdoors. It's up to you to choose what you value, but as for me, the N400 gets relatively poor marks for my own use case, despite the connectivity, ANC effectiveness, and transparency mode being of quite good quality.

For those who don't care as much about the functionality of the TWS itself, or after reading the above have come to the conclusion that those issues are certainly tolerable, this is where the review gets a bit more positive. I'll preface this by saying that these are perhaps the best TWS IEM's I've heard (between the WF-1000XM3, AirPods Pro, Galaxy Buds, Sennheiser Momentum TW, and Lypertek Tevi).

The bass is the shining star of the IEM, by far. There's a nice subbass focus with minimal to no midbass bleeding. Attack is relatively sharp with a slow decay, which for my tastes is perfect as it means a sharper initial leading edge on the subbass notes while allowing for the slower decay to let the rumble shine. Additionally, bass is decently textured, a bit more so than even the likes of the Etymotic ER2XR (my benchmark up until about $300 in the IEM world). I could see the bass being a bit much for certain people in terms of pure quantity, but for many the bass will do nothing but satisfy. Top marks here within the TWS realm.

The midrange below 1k is also fantastic. It is mostly flat from 200-1000hz with perhaps a 1dB lift starting at 800hz and transitioning into the bass. I wouldn't change a thing from 200-1000hz. No bleed, no smearing... note weight is fantastic here. The midrange above 1k, however, is not as stellar. There is about a 10dB rise after 1k, peaking at 3k. Interestingly, my gripes here with the upper midrange are less that the presentation is pushed forward and vocals sound shouty, and more that the tonal balance is skewed as a result. Vocals have a slight tinny, telephonic tinge to them, and electric guitars have a bit too much bite. I will emphasize that these gripes with the upper midrange presentation are relatively benign, and my ears adjusted rather quickly. However, coming from the WF-1000XM3, the upper midrange sounds a bit too intense and a bit less natural. However, for many, especially those who enjoy the Harman target, the upper midrange on the N400 will sound just right.

The treble is my least favorite aspect of the N400. Though its timbre is not as grating as, say, the Galaxy Buds, there still exists a bit of a sheen and edge to the sound that I hear come out on cymbals, high hats, and in the overall tone of instruments and vocals. Through my sine sweep, I heard peaks unrelated to the resonance peak at 5k and at 10k. Like the upper midrange, these peaks are less of a concern from a sibilance standpoint and more of an issue when it comes to throwing the tonal balance off. Cymbals have a slight compression to them and the 10k peak does contribute to a bit of intensity that characterizes itself on most tracks that I listened to. Definitely a bright, and slightly splashy IEM. I don't want to overstate this issue and call these IEM's fatiguing, but I do want you to be aware that this the treble here, combined with the large (yet clean) bass emphasis and forward upper midrange all work together to make this a somewhat intense listen.

Technically, these IEM's are no slouch either. Dynamics and resolution are both solid and appropriate for their price range. Imaging and soundstage are decidedly IEM; that is, they do nothing to distinguish themselves from other IEMs. Not bad, not good. Finally, the coherency is good as to be expected from a single DD.

Despite my misgivings with the sound, the N400 manages to outclass all of its competitors in that realm. The WF-1000XM3, I would say, is its closest competitor in sound, with myself preferring the presentation of the N400 below 1k and the presentation of the XM3 above 1k. However, I would say that the XM3's midbass bloat and relative lack of subbass extension are a bigger tonal issue than the N400's brightness, and as a result the N400 is a better overall package sonically. For other comparisons, I do believe them to be leagues ahead of the AirPods Pro, Galaxy Buds, Lypertek Tevi, and Momentum TW. If you're in the market for a good-sounding TWS IEM, and don't mind the slightly intense listen, the N400 will surely satisfy.

My biggest warning with these will 100% be centered around the functionality and convenience of these. We purchase TWS IEM's because we are willing to make concessions in sound quality for the sake of convenience. The N400's latency, battery life, reversed charging case, and sensitivity to wind all create a user experience for myself that tends to annoy and distract compared to its competitors like the AirPods Pro and the WF-1000XM3. For me, these issues are enough of a dealbreaker that I simply would rather use the XM3 over the N400. Whether those issues are a dealbreaker is, ultimately, up to you.

The TWS market continues to grow, and I'm excited to see how manufacturers improve the technology itself while also maintaining and improving sonic integrity. The N400, overall, is a good addition to the market, and certainly sets a standard for sound quality, to a degree within the wired-IEM world and especially so in the TWS world.