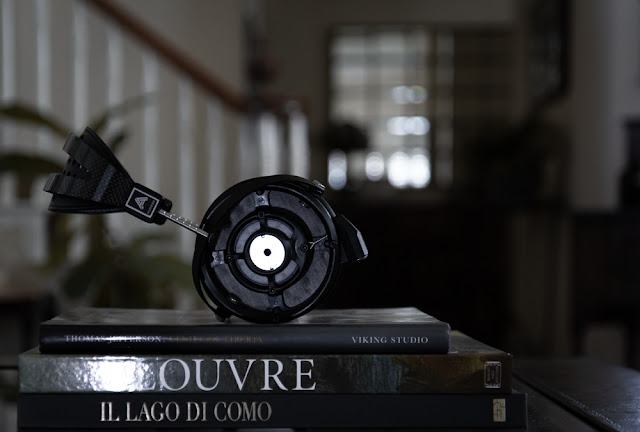 The Borealis is a headphone by Aurorus Audio, and MSRP's at $900. This headphone (along with its closed counterpart, the Australis) was created by two enthusiasts from the community who sought to take the best from an array of headphones and combine them in to a solid, well-rounded package. The Borealis takes particular inspiration from the Sennheiser 6X0 series (particularly, the HD 580), and seeks to retain as much of the timbre of that series as possible while making notable improvements in other areas. The HD 650 is likely one of my favorite headphones ever created, so I was looking forward to hearing a headphone that sought to emulate the characteristics that I've enjoyed for so long.

To start, this unit is not mine, but rather a friend's that I am borrowing for a short period. As you may notice, there is an Audeze headband attached to these. These are not stock, so I cannot comment on the build or comfort of the stock headband. These weigh in at about 485g, and with the Audeze headband, the weight was distributed evenly and did not create any hotspots. The pads themselves are very soft and plush, and I can wear these for about 3-4 hours before experiencing minor discomfort on my left ear (which seems to be slightly larger than my right ear). The opening in the pads is moderately sized and moderately deep. Folks with bigger ears might experience more discomfort after enough time, as the openings are not as well-shaped or as deep as, say, the Sennheiser HD 650. Build wise, the cups, despite their unique look and exposed driver, feel solid and well-built within my hand. I actually wouldn't feel too scared if I accidentally dropped these, which is more than I can say for most headphones. Looks can be deceiving, right?

Bass is extremely notable considering its open-back, dynamic driver design. Subbass is very well extended, much better than most open back dynamic drivers I've heard to date (competing well with the extension of the Utopia and HD800). It can't quite compete with good planar magnetic drivers like the Audeze LCD series, with the Borealis rolling off a few dB past 50hz or so. However, the extension and rumble is extremely notable for its driver type, and I would be comfortable saying that this is some of the best bass I've ever heard from an open-back dynamic. Subbass rumbles well without any EQ and is nicely textured, while the midbass has a tasteful, minor elevation to retain punchiness without any sense of bleeding or bloating. Very well-tuned and well-extended here.

The Borealis' midrange, to me, is a mixed package. Midrange below 1k is exquisite, nearly perfect for my tastes. The transition from upper bass to lower midrange is very reminiscent of the HD 6X0 series, the flatness as the FR approaches 1k keeps things relatively neutral in tone and non-distracting in any sense. However, there's some tonal issues to my ears from about 1k to 5k. There's a Focal-like bump at about 1.2k, pushing vocals a bit more forward than I would prefer and creating a slight boxyness to the sound. There is a noticeable downslope in the upper midrange which, to my ears, robs female vocals and electric guitars of the bite that I expect from them. This depression in the upper mids is not severe by any means, and nowhere close to the sorts of caverns you might expect from an Audeze headphone. But considering that the Borealis is often favorably compared to the 6X0 series, I do want to mention this as a possible point of contention for those who are satisfied with how the Sennheisers present the upper midrange. For my own preferences, these simply need maybe 2-3db more in the upper midrange and presence region. As it is stock, the upper midrange and transition to the low treble sounds a tad too relaxed for my tastes.

Speaking of the treble, there is a small lowtreble emphasis that I hear (centered around 5k), but it's not enough to introduce any sort of sharpness or edge. Rather, it just alters the tone a bit. The midtreble follows suit in being more relaxed than the likes of the HD 580, though not quite as noticeable as the upper midrange. I could probably use 1db more overall emphasis from 6k to 8k or so to liven things up a bit and help the treble to sound a bit less rounded and lacking in energy. However, these are minor tonal nitpicks on my end, and the low/midtreble might sound perfectly flat to you. The upper treble could use a bit more air up top, with me preferring a bit more around 10k or so. Overall, there is minimal splashiness and the treble is relatively even, though a very slightly relaxed listen relative to what I would have liked.

Overall, the Borealis' tonal balance is relatively inoffensive and balanced, though not without its own flaws. Smoothness is the name of the game here. I think if there was a bit more added from 3k-8k (save the lowtreble), and there was a bit more extension up top to introduce a better sense of air into the overall sound, these would be quite compelling from a pure FR standpoint. As it stands, the issues are overall tolerable, but still noticeable.

The Borealis is quite a resolving headphone. I'm not willing to put their resolution up to par with the likes of the Utopia or the HD800, but I do think it definitely competes with other headphones in the $1,000 range, and perhaps even challenges the likes of the Focal Clear in that regard. Despite the upper midrange being depressed relative to my own preferences, the midrange detail is notable here, noticeably edging out the 6X0 series despite me preferring the midrange tone of the latter. Dynamics here are among the best I've heard from an open-back dynamic headphone, and is one of the areas where I would say the Borealis either equals or even slightly outdoes the Utopia. Kickdrums slam extremely hard on these when called for, and the Borealis is able to notate the differences in intensity throughout a track with precision and control. The resolution, in combination with the 1.2k bump, create a relatively forward and aggressive listen, which can be a good or a bad thing depending on what you want from these headphones.

I want to particularly speak about the timbre of these. The 6X0 are known for possessing perhaps the most accurate and natural midrange timbre of any headphone period. The Borealis does comes somewhat close to reaching that goal, though still falls short in the end. There's a bit of an unnatural, metallic tinge to it that presents itself on most songs that I hear. I have to reiterate that I still believe the timbre on these to be pretty natural overall. However, timbre and tone are perhaps among the most important parts of a headphone for me (which is why I've daily'd an HD 600 or HD 650 for so long), so when there's timbral issues, I tend to notice it more quickly and apparently than other areas of sound. Especially considering that the timbre of the Borealis has been one of its most praised aspects, I was mildly disappointed to see that it didn't come as close to the HD 6X0 series as I would have liked, especially in the midrange.

Soundstage is above average, extending a bit outside of your head both width and depth wise without becoming overly distracting like I believe the HD 800's stage to be. Imaging and layering are a mixed bag. It's not bad by any means, but I don't believe it to be much of an improvement over the likes of the 6X0 series. There's a degree of fuzziness to the imaging that's relatively apparent. The Utopia, as well, layers significantly better than the Borealis to the point that switching back to the Borealis can be distracting at times. Of course, the price differential between the Utopia and Borealis is significant, but considering the praise that Borealis has gotten overall, I do want to make this comparison.

Finally, speed... Despite Marv's burst measurements indicating otherwise, to my ears the Borealis didn't sound like a particularly fast headphone. The transients and leading edge can sound a bit blunted and lazy at times, though not to the degree that it's really all that bothersome. However, I wanted to note my own subjective preferences considering the measurements for it seemed to show that it was quite a speedy headphone. Not the fastest, not the slowest there.

Just to note, I've tried this headphone on a range of sources, from the JDS Labs Atom, to the Gilmore Lite mk2, to the Niimbus US 4+. I found that a more powerful amp makes noticeable improvements to soundstage width and dynamics, while making slight improvements in pure resolution. Considering how sensitive these headphones are, however, the Borealis won't have much trouble running off of budget sources like the Atom, and I found that not too much was sacrificed doing so.

The Borealis is a special headphone, in many ways. It's got its own issues, especially above 1k, and these issues can be genuinely distracting. In that sense, it's not a perfect headphone, and it's not quite the perfect successor to the 6X0 series, as much as I wanted it to be. The tonal balance overall, however, is quite good overall, and for those handy with EQ, I doubt you'll have to make too many large changes to get this headphone to where you want it to be. This is unlike headphones such as the LCD-2 which, to me, absolutely require EQ to be listenable (granted, they take EQ like a champ).

However, once the tonal issues are looked past, what you have is a $900 headphone that has a relatively natural timbre, very good resolution, exceptional dynamics, and good... everything else. In many ways, Ruck and Eudis (founders of Aurorus Audio) have succeeded in creating an "all-in-one" headphone in that, if I were to own only one headphone for the rest of my life, this would be high on the list. While I don't believe the Borealis to compete as an overall package with the likes of the Utopia, and while I wouldn't say it even outperforms something like the Clear, I do think that they perform quite admirably for the price, and in many ways punch a bit above their own $900 MSRP.