A couple months ago, I was browsing Ali Express for no real reason, but I randomly came across this random headphone amplifier that looked a lot like the SMSL SP200 headphone amp that came out last year with the popular THX-AAA 888 circuit design. The photo of this amp, made by F.Audio, and not to be confused with F-Audio, a high end In-Ear Monitor company, had a very similar board layout, components, and chassis. In the Ali Express product name, they even say SP200 in the title description.

I’ve been contemplating whether to just give it a shot since it wasn’t too expensive, at under $200 and now only $179 via Linsoul.com. But, due to the global pandemic and shipping nightmares a few months ago, I decided to just forget about it. It did have this 4.4mm output that I always wanted since I’ve already converted all my IEMs and headphone cables over to this new balanced plug, but I was fine also just using adapters for the time being when I needed to..

Linsoul started carrying this product recently and reached out to send me a unit to review. I received this unit and have been playing with it for several days now. It can be purchased at Linsoul's website:

The first thing I noticed when I opened up this package was that it did look remarkably like the SMSL SP200 in both size, shape and weight. A few major differences though -- the annoying, at least to me, slanted edges of the SP200 are not present here. F.Audio opted to go with normal vertical edges to on the AM01 which is much more pleasing to me from an aesthetics point of view.

Another thing to quickly note is that there are much more connections on this unit. On the front panel, there is a gain switch, power switch, and input switch. In addition, the headphone outputs are placed acoss the front, with XLR, 1/4 inch, and 3.5mm and then the switches, and the 4.4mm next to the volume knob. The 3.5mm and 4.4mm were not in the SP200 for comparison sake.

On the back, there are XLR and standard RCA inputs, and an additional 3.5mm aux input which is handy for a DAP or phone. The power unit can be used with the various input voltages around the world, and my unit came with a Chinese cable. I had to swap it out with a cable with a North American-style plug to use. Luckily, its a common cable style.

The chassis isn't the best. It has a very industrial look to it, which amounts to an everyday aluminum project box with cutouts where needed. The top of the box feels a little flimsy, and because of that, it sags a little bit and doesnt fully cover the side panels.

The connectors also aren't the smoothest to insert and eject cables from. They take a bit of force to put them in and don't have a satisfying sound that better connectors have. This was across the board on the connector types, with the 4.4mm and 3.5mm feeling the worst.

I added some taller feet to the headphone amp. I found it ran a little warmer than I'd like on a warm Summer day, so adding taller feet helped air circulate through the bottom and it benefited by being much cooler to the touch.

Please note, this does not mean it runs hot. With it's default feet configuration, it still runs cooler than most of my other solid state amplifiers and probably as warm or perhaps even cooler than the SMSL SP200, which I remember got pretty warm as well.

The volume knob is a little small. Not the end of the world or anything, but I like bigger knobs, so I added my own larger knob. Maybe I over did it, you can decide...

Some of the same annoyances that were present with the SP200 seem to be the ones here too. This includes:

Too much gain on Low Gain

This is a problem with a lot of amps so not just this one. The low gain mode just has too much power for IEMs and sensitive headphones to really make full use of the volume pot. This can be remedied by reducing the source volume if that is possible (e.g. DAC, Windows 10, etc.). In my case, I set my iFi Zen DAC to variable output, and set the knob at 50%.

This becomes a problem because...

This is an issue with many analog pentiometer volume controls. If you don't turn it past 7 o'clock or so on the dial, then usually one sound will come out of one channel. This obviously isn't a problem if you are using harder to drive headphones, but if you are using a higher sensitive set of headphones or IEMs, and the first issue affects you, this will double down on the issues.

There is some noise in the system that is audible on highly sensitive IEMs and headphones. It was very noisy when I tried this unit with the Empire Ears Wraith which is probably the most sensitive IEM I've used outside maybe the Campfire Andromeda or a set of Shures. I didn't hear any noise with any of my headphones however, with the most sensitive and easiest to drive one being the Fostex TR-X00 headphone.

Please note that this is a bigger problem on 4.4mm and XLR output (balanced) than it is on the 3.5mm output. That said, on my most sensitive IEMs, there is a small faint amount of noise on the single-ended 3.5mm output.

Okay, with all the problems aside now, I actually do find that this amp sounds really nice, especially at the price of $179. It does in fact sound like other THX-AAA amplifiers I've owned in the past; mainly the Massdrop THX-789, the Monolith Balanced THX-788, and the SMSL SP200 THX-888.

It has a clean, crisp and mildly-aggressive attack. I find everything has a slightly-sharp sound to it, when compared to some other amps I enjoy like the Schiit Asgard 3 or the DAC it was running through -- the iFi Zen DAC. It doesn't have as soft transients as the warmer sounding amps that I have, but this also makes it sound more precised and dialed in.

There's a lot of power on tap here for most headphones to use, and it sounded much more impressive with my Hifiman Arya than the iFi Zen DAC did. The Arya is my hardest to drive headphone.

As with most of these highly linear amplifiers, I do find that sometimes the sharper sound can be fatiguing and lack a little bit of warm liveliness to it. It's sterile and clean, no doubt about it. And that's a great thing if you're looking for that type of reproduction.

The F.Audio AM01 is an interesting piece. Is it truly a clone of the SMSL SP200 THX-AAA amp? I can't be certain for sure as I am not someone who can piece that together and be sure. I do know it uses a lot of the same types of components, same looks and build and even the same issues. It does also add more features with additional useful I/O which I am very happy to have.

Build quality is a little lacking, even for something that is $179, but I do think this is a nice sounding amp that has a lot of inputs and output options for a very low price. I wouldn't recommend this for IEM users due to it's noise floor issues, but should work fine for headphones. 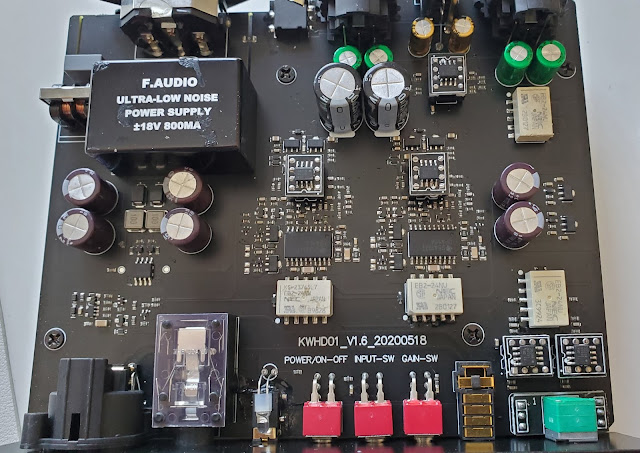 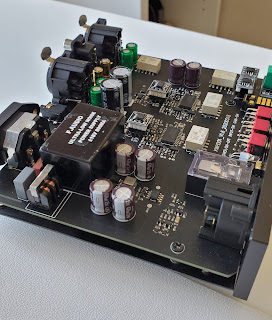 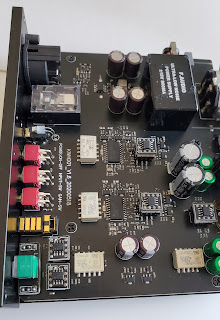