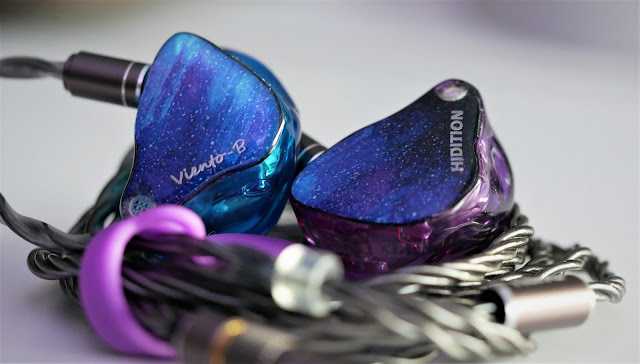 Late last year, I put in an order for the Hidition Viento Reference universal In-Ear Monitor (IEM) and received and reviewed it earlier this year. The Viento is made by a small boutique South Korean company called Hidition, and is tuned to be a reference monitor that has a very similar sound signature to the Etymotic target. It is tuned to really not have any part of the frequency response to be relatively flat and neutral as possible, but also has tuning switches to add more sub-bass or lower-midrange gain to suit specific user preferences.

After owning the Universal for a few months, I decided to take the next step and buying the custom unit instead. This review will go over the basic process as well as sound differences between the universal and the custom set, and some general impressions overall.

For reference, the custom I chose cost $990 USD and was tuned to only the "B" tuning, which has elevated sub-bass. This was my favorite of the 4 tunings the Viento is offered in. A Reference/Switch custom will cost just over $1500 USD. Additional artwork/design choices may incur additional fees.


Normally to get a CIEM, you start with getting ear impressions made typically by an audiologist, or someone who knows what they’re doing. They will take a 2-part mixture of special ear impression silicone material and mix it around and put it into a syringe and inject the material into your ear cavity and create a nice clean mold of your ear. This can then be sent off to the manufacturer to use as a mold to cast the CIEM shell from. In my case, I’ve actually learned how to do the impressions on my own, but I highly recommend getting it done by an audiologist. 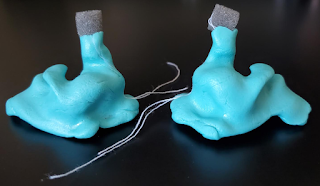 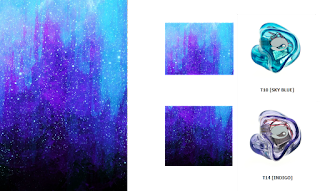 After getting my impressions made (by myself), I took some photos and emailed Hidition to make sure they looked right before I sent them across the world. Once confirmed, I dropped them in the mail and had them shipped express, since I did not want to take any chances with the COVID-19 Pandamic happening.

Once they arrived, and were inspected, we discussed the design and billing. I chose a purple/blue themed design, as shown in the above photo and sent them that idea and gave them liberties if needed.

As for billing, just like my universal set, they only took payments via Wire Transfer direct to their bank account.  This process does incur an wire transfer fee, so be sure to remember that if you decide to go forward with this. My HSBC transfer cost $35. 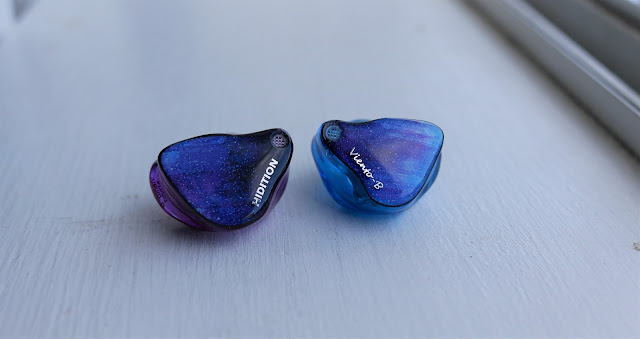 After about 3.5 weeks, I got an email notice from Hidition with tracking number. They shipped it back via FedEx International Express, and it arrived within 2 days. I opened the box with great anticipation and when I put my eyes on the CIEMs for the first time, I was definitely not disappointed.

The design and look was exactly what I was envisioning, and they transferred the artwork and shell choices over perfectly. I chose to go with mmcx connectors and those had no problems with fit on my cables I already had owned. They do include their own cables, but I chose to go with 4.4mm balanced cables made by Dunu - the DUW-02, the be exact.

In addition to the cable, the Viento CIEM also comes with a personalized engraved small pelican case, a cleaning cloth, and cleaning brush tool, as well as a pamphlet, and paper copies of the measurements of each side. 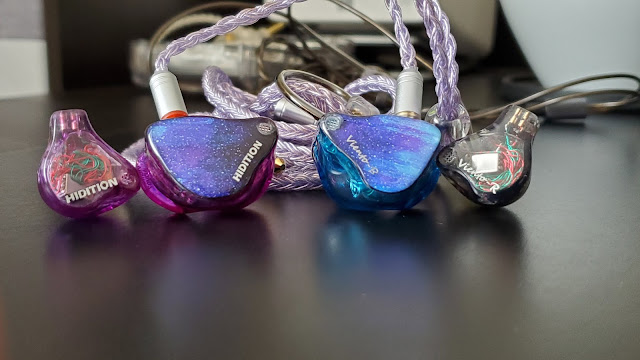 The shell is much larger than I expected, with the final product being almost twice as large as the universal shell. The shell size was a tight fit into my ear cavity and is a deeper insertion depth than my other two CIEMs -- the Unique Melody ME1 and the Thieaudio Legacy 3. With this larger fit, there was some pain on my upper concha for about a week or so, but over time, my ears got used to the fit and do not hurt much anymore except if I do not put them Viento in my ear in the right orientation. It does require near perfect placement to not cause any mild pain spots, but can quickly be adjusted to fit.

Getting used to the fit also helped by the use of ear lubricant such as Oto-Ease, which I used often with the Viento, and also occasionally with the other CIEMs and even Etymotic earphones that I own. It helps slide the Viento in easier and gets better seal. I don't typically use it now with the Viento since the large size of it seals up pretty much anything and leakage is never, ever an issue with this set.

I have covered most of the sound impressions of the universal set in my previous review, and so I'll mainly go over what I find the main differences between the Universal and using the Custom version of the Viento-B.

The measurement above in purple is my best attempt at measuring the Viento-B CIEM. You'll notice there is a bit of bass distortion, and that's due to how it was fixtured and also held with pressure manually. In reality, the graph should fall in-line with how the universal looks, which is overlaid in gray behind it.

The universal version does exhibit a higher level of treble as indicated in this graph comparison. It's obvious when I listen to poorly recorded tracks, pop songs, or music with higher pitched female singers. For example, when I listen to "Boyfriend" by Tegan and Sara, there's plenty of sibilance scattered in the track when I listened to the Universal, and I covered that in my review earlier.

With the custom version, that sharp sibilance is no longer and issue and with the deeper insertion, I feel like the treble extension is more even and smooth. This wasn't an issue necessarily for the universal either, but it did seem to sound more focused on the 6-9KHz range than the upper treble beyond 10KHz.

One thing that I do find that I miss a little bit is the extra perceived space and soundstage that the universal had, probably due to the shallower fit and the extra treble. This made some of my orchestral and jazz music sound a little more open and wide. The CIEM version still has a nice medium to wide soundstage and imaging is still excellent.

I also believe bass sounds tighter and the overall coherency is just as good as I remember the universal to be. Again, the Viento is the most coherent multi-driver IEM I've heard to date and that equates to a very nice smooth listen across the board, despite having a boosted pinna gain. 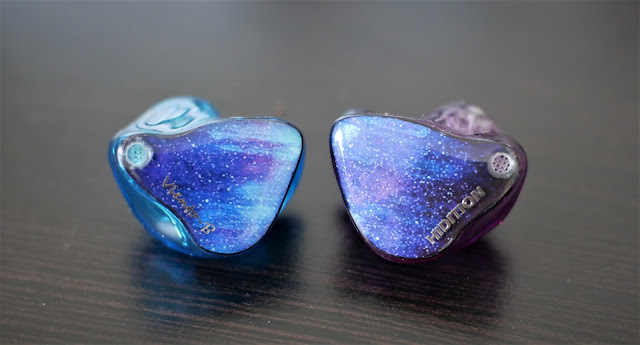 So a few quick takes before I sign off on this short review:

On where it excels:
I think the Viento is a great all-arounder, but specifically excels in acoustic music -- things that use real instruments -- genres like classical/orchestra, jazz, samba, bluegrass, acoustic guitar, and the like. It will play rock and dance and hip hop alright, but you may find it's thinner sound to be lacking a tad compared to something that may have a warmer bass presence or a dynamic driver.
Coherency is top notch. Resolution is solid to excellent. Imaging and depth are great.

On whether this was worth the time and wait:
Yes, for me personally, it was worth it. I love the custom design I picked, of course, and it came out great. I also always wanted a custom neutral reference monitor and I think this fits that definition well. And it's relatively affordable for a top tier IEM in a custom form-factor at $990 USD.

Final words:
I'm pretty happy with the Viento-B. It's maybe not for everyone, but definitely something to investigate if you're in the market for a unique reference-style IEM. 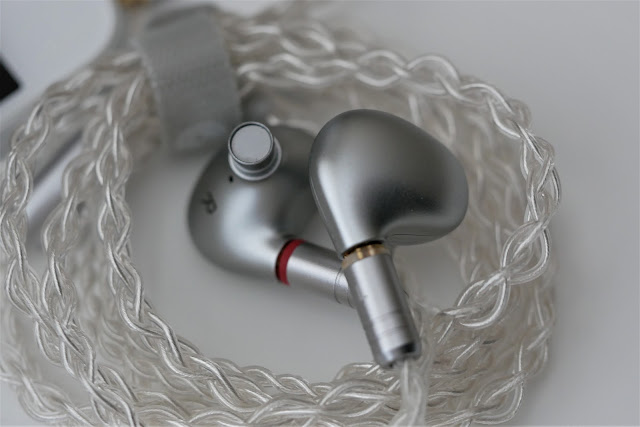 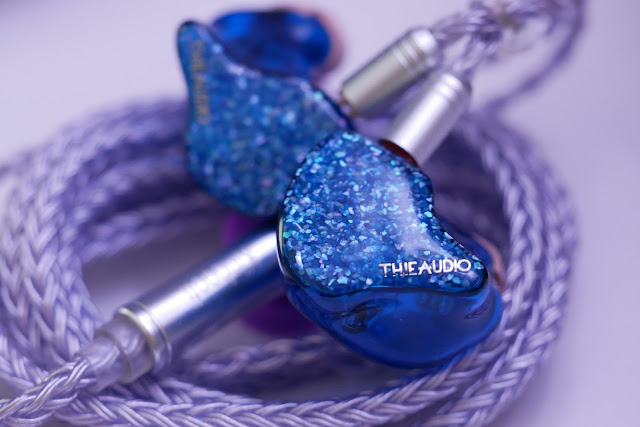 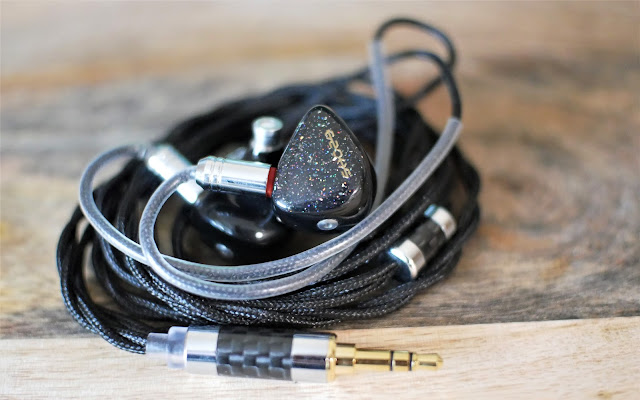