The Soundaware P1 is a flagship balanced headphone amplifer that came out in 2018 and priced at $1500 USD. This headphone comes in two colors, blue and silver/gray and comes packed with high quality components and assembled into this medium sized headphone amplifier that has some stunning looks to it.

First off, this quick impression/review could not have been made possible without the kind courtesy of Jeremy (jb77) from The Headphones Community forums. He loaned this out to the community to try out along with several other pieces of gear he owns. 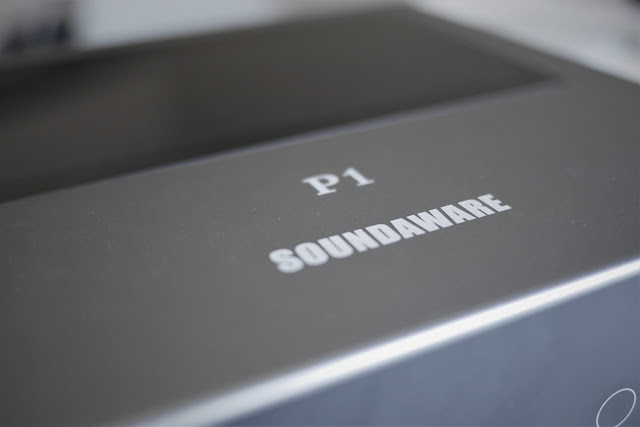 
The P1's front has a simple volume knob as well as a small dip switch that controls Pre-Amp and Headphone amp functionality on the right side. In the center is a black panel which has the input selector touch button and the panel lights up with the selected input source. On the left side is a 4-pin XLR balanced female connector, as well as a 1/4 inch female single-ended connector for headphones.

The back of the amp has a set of dual-XLR and dual-RCA analog inputs as well as a set of outputs if the user wants to use the device as a preamp to another device or powered monitors. The center of the back panel also features a USB power source to charge a device, as well as a HDMI-looking SAW Link port which can be used to pair up Soundaware's Digital Audio Player. Finally, there's a flip switch for power and the cable connector for power.

What is really neat about the chassis is the top of the unit. This house a blacked out window which lets the user peer into the unit when its turned on. A set of LEDs will illuminate with power and you'll be able to see the amplifier design inside. It reminds me a bit of the RME ADI-2 Professional Anniversary model which also had this same feature. 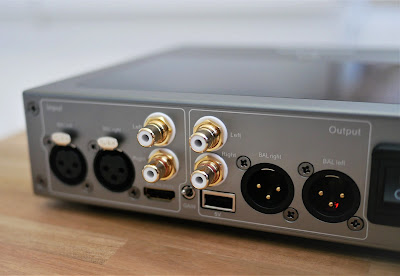 There isn't any noise floor issues with IEMs on this thing. It's very quiet unless you turn the volume knob past half way. At which point, your IEMs may blow up because this thing has a ton of power. (I'm joking about the blowing up part, or at least I hope so...) This amp dumps 6 watts of power into 30Ohms on balance, so that should drive most gear without a hitch. 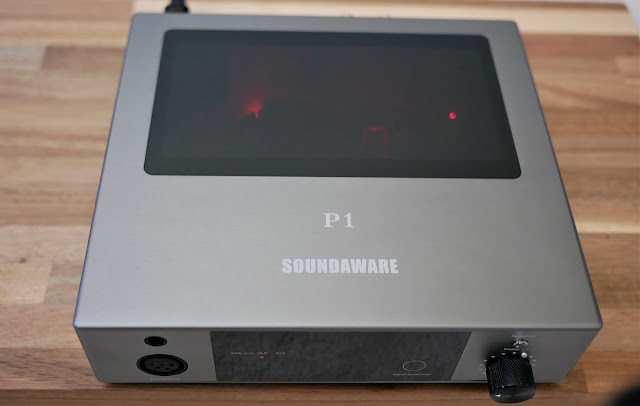 In my quick sound impressions, the P1 was paired with the Schiit Bifrost 2 multi-bit DAC and also fed through the Schiit Saga+ Tube/Solid-State preamp. I put it up against the Schiit Jotunheim, which is also a balanced solid-state amplifier and priced at $399. A-B-ing wasn't super easy, in my current setup, so I just plugged and unplugged the headphones between the two amps. The Saga+ was able to constantly feed music to both amplifiers at the same time however.

My major takeaway from my listening experience between the two, and again, I mostly listen to bluegrass, jazz, and acoustic guitar type music when I demo amplifiers and DACs to pick up on minute details, is that I think the Jotunheim is a step below the P1 in terms of sound quality, sharpness and warmth.

I always felt the Soundaware P1 had a little more character, and a little more energy to it. The Jotunheim almost sounded a little flat  in comparison. The P1 has a warmer tonality, but it didn't necessarily have the soft transients that I typically find with warmer amplifiers. No, instead, I found the upper mid-range and treble regions to have more presence and have a sharper and more forward and defined tone to it. Strings resonated with more clarity and intimacy with the P1 than it does with the Jotunheim.

I was a little surprised at that, and it's not to say the Jot is lacking detail and quality. It isn't. But I did find the P1 to show a little more attention to detail I guess, much in the way I find the Bifrost 2 to have just a little more harmonic clarity and sense of space than some of it's competitors.

The P1 sometimes does feel a little more intimate but doesn't lack imaging chops, and while I do think it has a sharper and more accurate and edgy aggressive sound to it, I don't find it near the sterile nature of the THX-AAA amplifiers I've tried as the P1 has an added warm factor that reminds me of Class A-type amps I've listened to in the past.