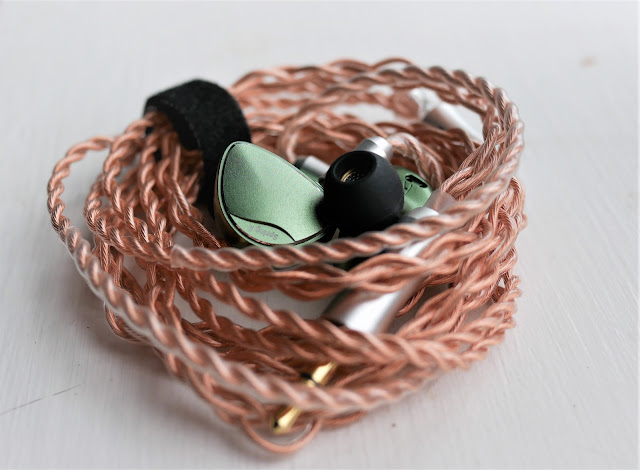 The BQEYZ Spring 2 is a follow-up to the Spring 1, which I unfortunately have not heard before and so I won't be able to make any comparisons to the original set. That said, this IEM comes in at a price of $169 and features three driver technologies: a 13mm dynamic driver, a balanced armature driver, and a 9 layer piezoelectric driver.
This unit was provided to me by HifiGo store for review. If you are interested in this set, you can find this on their online store at https://hifigo.com/products/bqeyz-spring-2-new-tri-brid-in-ear-monitor-iems-earphone

The Spring 2 comes in two color variants: Black with red accents, and Green with silver accents. The unit I received was the green colorway. The IEM shell is a CNC machined aluminum and is a bit thicker than other IEMs I've used, however does not feel heavy while being worn. It does feel well made though.
This set also comes with a choice of 3 cable terminations: standard 3.5mm and balanced 2.5mm and 4.4mm options. The cable itself is a 4-strand copper cable that is also copper colored and braided nicely. It doesn't have any issues with being sticky or tangled and is light enough to be comfortable for use over long periods of time or with movement. The connectors and splitters are all light-weight machined aluminum and terminate in 2-pin connectors. 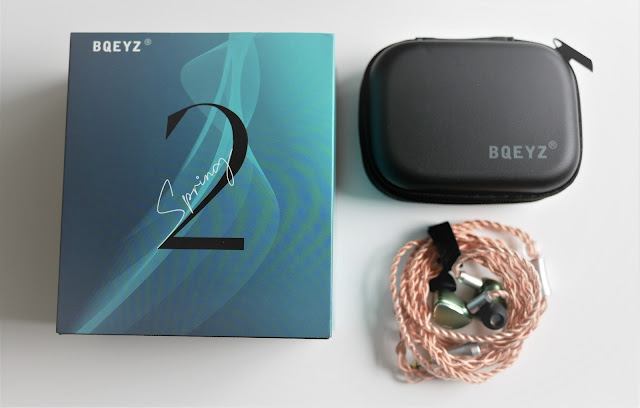 One interesting thing to mention here is that the shell has 3 individual vent holes in it, which is something I do not see too often. Normally there is one or two that are on either side of the shell, but in this case there are three that sit near each other on the ear side. The first one is towards the bottom transition between the nozzle and the body, while the other two are adjacent to each other on the main face.
The thicker shell design along with the nozzle type does make it a bit challenging for me personally to wear. It's by no means uncomfortable or causes any discomforting pain or anything, but I found it troubling to get a good seal and to get it to stay in.

The Spring 2 is generally balanced in its sound signature. It has a warm bass response, slightly shouty mid-range and a treble peak that can sometimes become audible but not too over-bearing. In my first listen, it reminded me of how the recent Tin T2 Plus sounds, and then measuring shows some similar trends as well.

That's not to say they sound exactly the same, but they do have a similar sound style. The Spring 2, like the T2 Plus, can some a little compressed. I'd say that it may even be more compressed sounding in some songs, where I feel like the midrange is little squeezed away, and both the soundstage and the resolution feel compromised.
It's not always like that however, and over-time my mind can adjust to it and the Spring 2 does have a relaxing enough sound signature that I can listen to it for hours at a time, which I did just prior to writing this review.
I threw at it several albums ranging from Tingvall Trio (Jazz), First Aid Kit (indie folk), Singles soundtrack (90's grunge rock), Sondre Lerche (singer-songwriter), and some good ol' Fleetwood Mac (rock). The Spring 2 sounded alright in each genre and each case.
For the Tingvall Trio selections, I felt like the Spring lacked a little bit of power in the bass guitar in these tracks, which can really drive these songs, and the cymbals and snare drums sounded dull and a bit lacking. This generally makes these songs by the Trio sound lacking a bit of energy.
For the more simple tracks from First Aid Kit and Sondre Lerche, I found the Spring 2 to be just fine. The emphasis in the upper mid-range does work well with the duo vocals of First Aid Kit and put Sondre Lerche's voice and guitar forward in his minimal tracks. I did get a sense of a bit of lower resolution with the Spring 2 on these songs however, and again this could be related to the compressed overall sound that I hear. This is something that I felt was below par even for something of this price range, and it felt more like an offering under $100 with the new wave of products that are out now.
My standard rock affairs sounded just fine with the Spring 2 however. Despite some of the cymbal and snare hits lacking full energy, I can live with it in busier rock songs where there's more things to pay attention to than single instruments. The Spring 2's warmer tonality works well here, and I think fits rock music well. 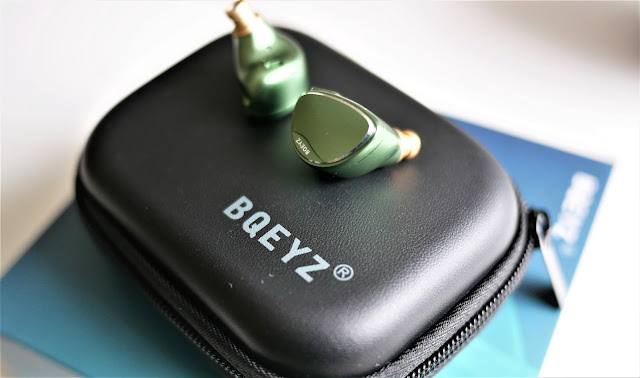 The Spring 2 gives me a bit of mixed-feelings. While I like the green pastel metal shell, and the included cable quite a bit, I had trouble getting good fit and good seal with these. That may have contributed partly to my sound impressions, which also were a bit lacking, at least for the price point. At $169, my reference points are the selections from Moondrop and Etymotic, and this IEM trails behind in both technical performance and general tonality, at least to my preferences.
It's not offensive by any means, it's just a tad boring and lacking something special to make it stand out.