DUNU’s a Chi-Fi company that’s been in business for more than twenty years – that’s longer than I’ve been alive! Of course, the star of the show today is the Luna. This is their flagship DD IEM that uses a beryllium driver. In theory, this is the ideal driver material in that it’s extremely static. As for how that translates to practice…well, you’ll see. Or rather you’ll read. The other two IEMs I was sent, the DK-2001 and DK-3001 Pro, are more standard hybrids. I don’t think I’ve done a “lineup” review before, so to keep things simple, I’m going to group the tangible stuff together and then analyze each of their respective sound signatures separately. There’s definitely some interesting stuff going on with this lineup, and if anything else, I’m glad to see that DUNU’s keeping things exciting.
In the interest of full disclosure, I want to thank Tom of DUNU for sending these along to me for review. They will be returned at the end of the review period, and as always, what follows are my honest thoughts.

I was sent the IEM itself as well as a few accessories. So no fancy packaging. Maybe when I make it big I’ll get sent all that stuff! Just kidding. I don’t fancy paying the return shipping. Here are some brief comments on the build and whatnot: 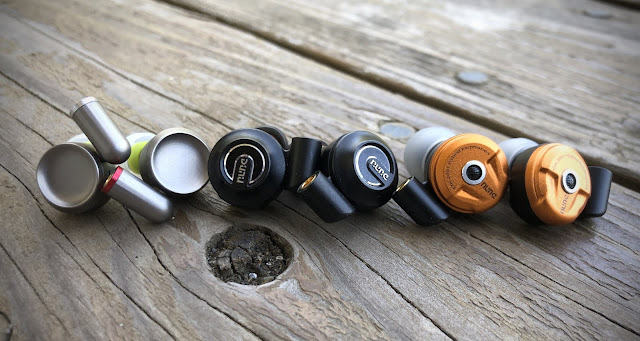 The Luna’s build is noteworthy to me because they’re using titanium. This is the metal of the gods: It’s hypoallergenic, essentially rust-proof, and has an extremely high strength-to-weight ratio. And even better? DUNU didn’t cheap out and run with Grade 2 titanium which is considerably more malleable and easier to machine. DUNU's making sure their stuff is going to last a long, long time. 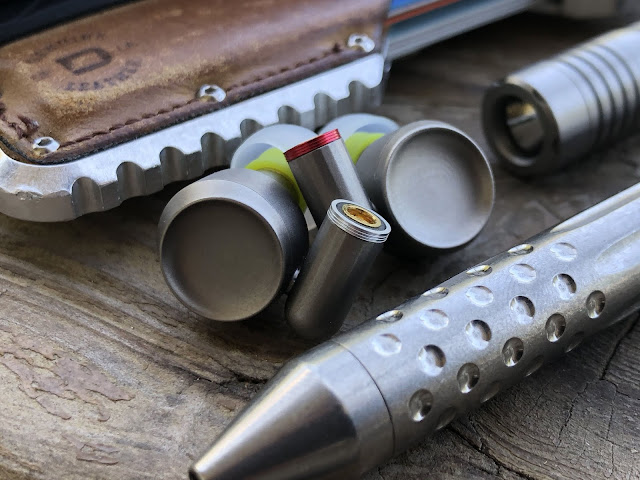 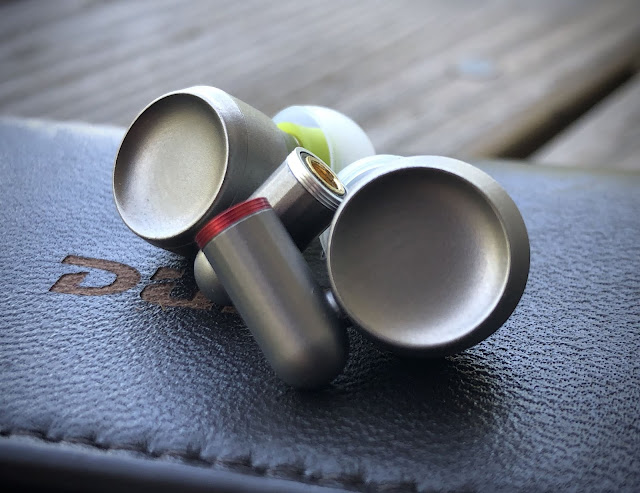 Lets’s quickly talk about their proprietary output swap system. This is a really simple, yet cool feature that the DUNU cables feature. There are 2.5mm, 3.5mm, and 4.4mm plugs available. All you have to do is line up a small notch and from there it’s plug-and-play. 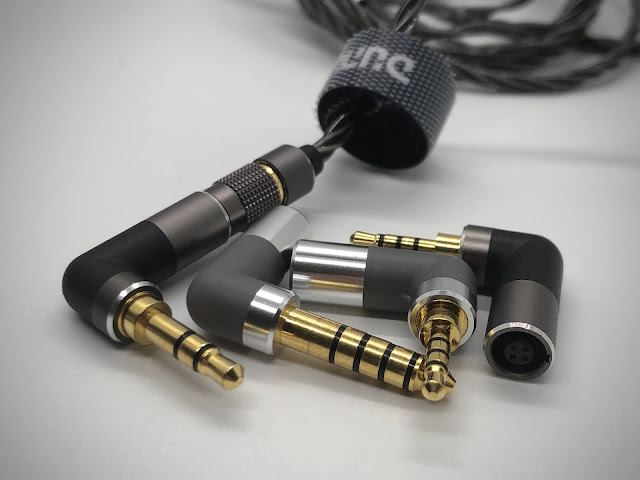 This is the “fun” IEM out of the trio, and it’s something of a V-shape with a steep-rise to the upper midrange and treble. It’s packing some surprises. First, the bass is in a bit of a weird spot; it seems to have slightly more quantity than the DK-3001 Pro. But it’s lacking some of that dynamic slam and texture that I would normally expect; the 3001 Pro does it better. Granted, the 3001 Pro does have more of a mid-bass emphasis, but I think that this is where some of that price difference is reflected. The 2001’s bass is still pretty decent and I don’t think most listeners would notice unless they were A/Bing.

Midrange is probably one of the better points of this IEM, especially with female vocals. Of course, this is personal preference as it occasionally slips into shout and sibilance. But the benefit of the rise to the upper frequencies is that vocals are delivered with quite the good resolution. Most definitely better than the DK-3001 Pro in this respect.

This extends to the treble region which is fairly energetic. There does seem to be a spike somewhere after 10kHz, though, and it presents itself annoyingly on some songs. A prime example is on Joe Nichol’s “Sunny and 75”. There’s an electronic, piercing sound to the left side of the stage at 0:24. With most IEMs, I find that it blends gently, subtly into the song, but on the DK-2001 it’s far more pronounced than it should be. Not unlike the DK-3001 Pro, the 2001 seems to lack sufficient air in the treble too.

Staging, as with all the DUNU IEMs, is pretty average. The DK-2001 never breaks the head-stage barrier for me. That being said, the 2001 is surprisingly technical otherwise. Imaging and layering capability are above average; and as I alluded to earlier, pure resolution is good. I find that most hybrids present issues with coherency in the timbre. And to this end, the DK-2001 is one of the better offenders. There’s still a plasticky-quality, but it’s not nearly as bad as the DK-3001 Pro’s.

Personally, I think the DK-2001 would benefit from some added bass boost. The greater emphasis on the upper frequencies can make it a fatiguing listen, and it’s a bit jarring A/Bing with more neutral IEMs. Recommended? With caution. It’s certainly not bad, and I like it in moderation, but tonality will likely be the biggest roadblock for most listeners.

This one runs close to neutral, and it’s pretty good; I think DUNU has a winner here. As usual, I think it makes more sense to outline my gripes instead. That way, you know what could possibly be a dealbreaker for you:
In terms of technical performance, I find the DK-3001 Pro to be at the level of most IEMs in its price bracket. Staging is firmly in-the-head and imaging capability is average. And as with most hybrids, there’s a good deal BA timbre – more so than the DK-2001 which surprised me. But in general, it layers sufficiently and I don’t have any real complaints other than the timbre which I’m admittedly sensitive to.

I’ve cited quite a few nitpicks, but to reiterate: This is a good IEM. It’s not going to win any awards for technical performance, and there’s no real standout, but it’s hard to dislike it. The cut to the upper treble and the slight roll-off to the bass also make it a good IEM for extended listening. In a sea of freak – excuse me, esoteric tunings, sometimes playing it safe is the right move. Out of the three IEMs I was lent by DUNU, this is the one I gravitate to most. Recommended – as long as you’re not a treble-head.

How does the DK-3001 Pro fare against the king of the sub-$500 bracket, the Moondrop Blessing 2? After all, they’re using the same driver configuration. Sonic-wise, 1:1, the Blessing 2 has a clear edge. It has tighter bass (albeit lacking in texture) and a much cleaner midrange. Some might find the DK-3001 Pro’s midrange less offensive as the upper midrange on the Blessing 2 borders on thin/shouty. Treble, treble isn’t even a contest though. The DK-3001 Pro also can’t hold a candle to the Blessing 2’s staging and imaging capability. But all of this doesn’t account for the tangibles. The Blessing 2 is a chonker and won’t fit everyone’s ears. I can see the 3001-Pro being a suitable alternative in that respect, and the included accessories are certainly better than the Blessing 2’s.

The one I’m sure most of you are here for. And well, the Luna is interesting. It’s certainly not lacking anything when it comes to speed – this thing is fast. Probably the quickest, snappiest transients I’ve heard of a single DD, and fairly good resolution to match. Despite the cramped staging, layering and imaging capability both seem well-above-average too. But what it really excels at, at least in my opinion, is dynamics. It’s terrific at scaling those macro-delineations, inflections with vocals.

Unfortunately, any further praise hits the can. Remember those “esoteric” tunings I was talking about? This is a good example. Simply put, the Luna is far from being tonally correct, and there’s a plethora quirks with its frequency response:
The bass is pretty alright – not great, but I can live with it. The midrange and highs, though? They’re dealbreakers for me. Most of my listening is done at lower volumes, but I still like to have fun sometimes. Even at just say, ~75dB, the Luna is extremely fatiguing on my ears. There’s no way I could possibly see this being a daily driver.

Tuning a new driver can’t possibly be easy, and I suspect that there are certain constraints that Dunu was forced to work with. Alas, while the Luna has its merits, the tuning is not one of them. The Luna is quite tip-sensitive, but all the tip-swapping in the world is not going to save it, especially when it comes to those nasty treble peaks. Believe me, I tried a good number of tips, and I’m quite sensitive as a younger listener. Could you get used to the Luna by letting your brain “burn-in”? Absolutely. Some people might straight-up enjoy this type of tuning, and I did find myself appreciating Luna’s technical chops quite a bit. But I cannot, in good faith, ignore its shortcomings that become readily apparent in A/B comparisons.

The DUNU line-up has been rather hit-or-miss for me. I like that they’re trying to switch it up, but sometimes playing it safe is the better ploy like they did with the DK-3001 Pro. My scoring will reflect this. After all, I do try to maintain some semblance of impartialness when scoring.

As I’ve stated time and time again, though, objective reviewing does not exist. To this effect, I really like DUNU as a company. The audio industry moves fast, and you don’t survive as long as DUNU has without doing something right. One of the first things Tom of DUNU told me was “Don’t be nice for the heck of it – I know beforehand you probably won’t be into the Luna’s sound”. Know what that is? Honesty. It’s a beautiful thing, and knowing that I don’t have to be shy about my thoughts, my opinion, is more than I could ask for. More importantly, it’s great to see that DUNU’s not content to rest on their laurels. If I had a “recommended” manufacturers list, you can bet DUNU would be on it.