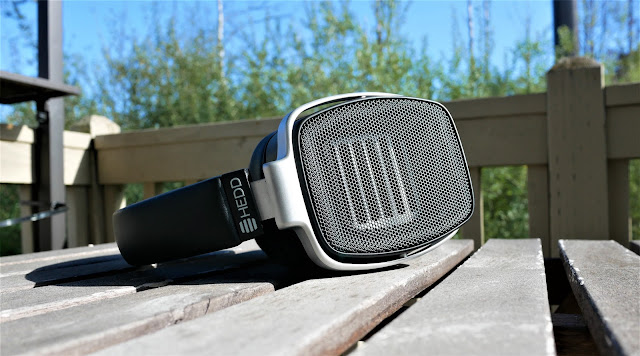 This will be a review of the Air Motion Transformer (AMT) Ribbon driver-based headphone, aptly called HEDDphone, which is made by HEDD Audio. This headphone was sent on loan to me by Jeremy (JB77) from The Headphones Community forums for a week to try out. Thanks Jeremy!

The HEDDphone comes in a huge box with a photo of the HEDDphone directly on the box. Inside is quite minimalistic however. It comes surrounded with foam inserts and comes with just the headphone itself and a braided nylon-wrapped cable. The cable is black and uses typical 4-pin mini XLR connectors to the headphones and a 1/4 inch stereo connector to an amplifier. This means it is swappable with cables made for most Audeze and ZMF headphones.

Like the box, the HEDDphone is huge. There's nothing small about it except perhaps the connectors which look incredibly tiny when attached to this headphone. For comparison sake, my Hifiman Arya's entire headphone (both cups + pads) is smaller in both width and height than one side of the HEDDphone.
The HEDDphone weights at over 700 grams and is quite a beast of a thing. The headband is also rather strange, and many have complained that it is too small for real use because the extender is rather limited. For me and my smaller head, it's just fine, and I only use about half of the headbands extension capabilities.
The headband itself has a beefy amount of padding and is generally comfortable. I wish it was a bit wider so that it does not focus all the weight on a small strip on my head because that 718 grams can get a bit hefty quickly.
That said, I was surprised that these were more comfortable to wear than my experience with the similar weight Audeze LCD-X and other Audeze headphones. I was able to wear this for longer than I expected, though after 1 hour, it does become fatiguing. And, I always knew this was on me, no questions about it. It's also so large and sticks so far out, I have to be careful not to bump into things as I walk by something close to my head.
The AMT ribbon drivers are kind of like planar drivers that are folded up like Ruffles potato chips. I don't know if I'm hearing this crinkleness sound because of that or what, but it's quite apparent when I put these on or if i move slightly. Crinkle! Snap! Crackle! Pop! After consulsting the manual and datasheet, this is very normal behavior, and happens when you are adjusting or moving the headphone around. 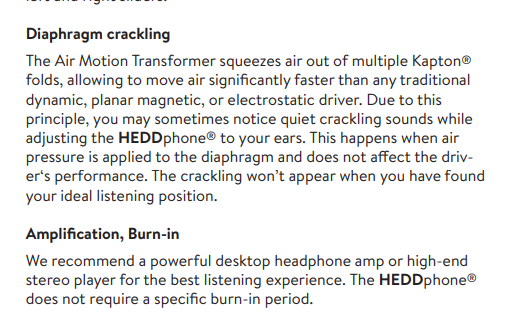 The seal on the HEDDphone is also impressive, especially for an open-back headphone. It's totally open, and sound leaks out like crazy, so much these can be used as speakers. But with that said, when I put these on, it sounds like I'm wearing closed backs. There's a strange echo when I talk, or I hear a more muffled sound when I do anything with no music on. It must be partly due to the giant pads on these. 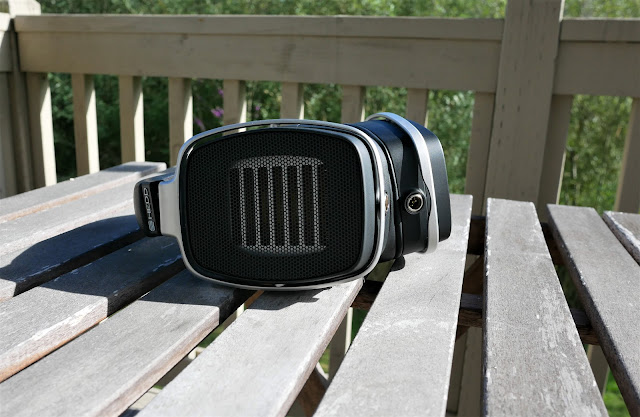 For this review I paired the HEDDphone with the following:
DAC: Schiit Bifrost 2 USB
Amps: Topping A90 Solid-State and Feliks Audio Elise OTL Tube Amp

The HEDDphone has a lot of planar-like qualities and to me sounds very much like one except perhaps has a little more tactility to it and sometimes the speed pushed passed most typical planar headphones and well above dynamic drivers I've tried. In this regard, I feel like the HEDDPhone has very quick transients, good resolution, and a generally lean and focused sound.

The bass response sounds very flat, except perhaps with a little more punch and texture capability compared to my standard Hifiman Arya. From memory, I'd put it above the LCD-GX and LCD-X in this same category, but I can't honestly say about the other LCD series. The ZMF Verite provides a much punchier bass with more decay and a warmer sound than the HEDDPhone though.
Like I previously mentioned though, the tactility is better on HEDDphone than my Arya. When I say this, I feel like there's just a little bit more slam and rumble factor and a little bit more impacting bass response, which I hear in songs like Daft Punk's "Doing it Right" or other slammy songs. That's not to say the HEDDphone slams hard. I think it's really polite, even when cranked up on my Topping A90 or Feliks Elise tube amp.
Speaking of which, I found the Topping A90 paired a little bit better than the OTL Tube-based Feliks Elise amp. While the Elise provided a nice warmer and punchier bass response, the A90's improved resolution and cleaner sound seemed to work better with the HEDDphone in my opinion.
I think this partly has to do with what I'll say is a bit of a polite treble response. I think the HEDDphone's midrange is very linear and well done for the most part, with a slightly forward 800Hz-ish area, while having a bit of a recession in the upper mids. That's fine, because I don't mind that at all, coming from the typical Hifiman sound where that area is cut back.
But, the treble area is a bit tame, however very smooth and elegant but also very well extended. The lower treble and presence region is tame sounding compared to the Hifiman Arya, but that's something you could say about a lot of headphones. I think the Arya can be a bit shrill in this region, and and find the HEDDphone has a very nice tone in this area that sounds realistic and a good blend of being very present, but not overly done.
In the 6-10KHz region, I find the HEDDphone to be a little soft and smoothed out, almost laid back to a sense. Whereas my other two headphones, the ZMF Verite and Hifiman Arya, like to accentuate this area, going to the HEDDphone, it sounded a little muted, but its still quite pleasing and really keeps everything in control with a soft, smooth, but well resolving and clean treble response. 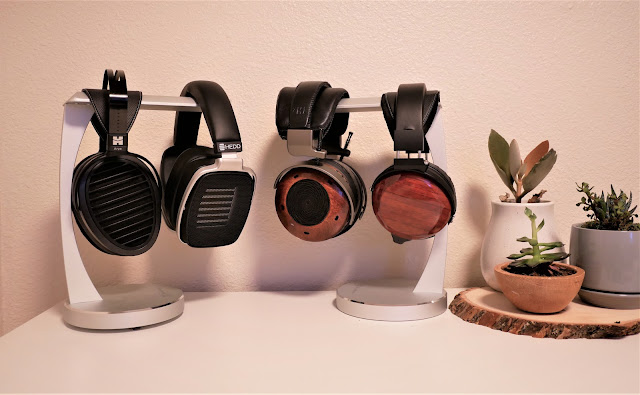 When I A-B'd back and forth with the Hifiman Arya in various jazz tracks, I noticed that the Arya had much more timbre issues with drum hits, particularly snare drums and cymbals attacking with a little too much nasally sounds. The same goes with female vocals. Going back to the HEDDphone, they sound a bit more natural, though in some cases a tad blunted. Somewhere in-between the two would be ideal.
Treble extension is good on the HEDDphone. There's a good sense of air while wearing these and I never truly found anything fatiguing listening to these. The speed and smoothness of the treble response was not quite an out of worldly experience of using an electrostatic, but it sounded a little more surreal than a planar headphone does in my opinion.
I haven't really talked too much about soundstage or layering thus far. I would say in terms of width, the HEDDphone is above average but not quite the width of the Arya nor does it come close to the levels of the HD800s. It does have a slightly more intimate sound, but it does well with imaging and layering. The dynamics are really good on this set and I think that contributes to the intricacies that this headphone can present.

The HEDDphone was a headphone (hehe) that I've been wanting to try out since I first heard about it a couple years ago. The weight numbers thrown around always scared me off, but I finally got to try it thanks for JB77 and it's quite an experience.
I was surprised that the weight didn't bother me as much as the LCD-X from Audeze did, despite both weighing similar numbers. I still wouldn't use this one for long periods of time, and the crackle sound bothers me a lot as well, and just the overall heft and size is crazy for my smaller head and body size.
The sound is good though. The tonality isn't exactly my preference, as I find the treble and presence region a tad too tame for my liking, but I think its a very enjoyable listen and one that is fatigue-free. The added tactility and speed over planar drivers is an unique experience, while not sounding too out of the box like an electrostatic does.
I can't wait to see what the next HEDDphone or AMT-driver based headphone will be. I hope they can do something about the size and weight, and I may think more seriously about owning one myself.