This is a review of the Kinera Freya. It is a hybrid 3 BA + 1 DD IEM that costs $250 from HiFiGo. Disclaimer: I received the Kinera Freya from HiFiGo in exchange for this honest review. I have not been or will be compensated in any other way.
Kinera is one of the older, more established companies in the ChiFi space. Unlike KZ, they have a more conservative release schedule with a focus on a few IEMs rather than many. The Freya is their newest foray into the mid-fi space. Boasting hybrid quad drivers, handmade, hand-painted shells, and a fairly luxurious set of accessories, the Freya looks to market itself as a lifestyle product for audiophiles. The only question is: does it sound as good as it looks? 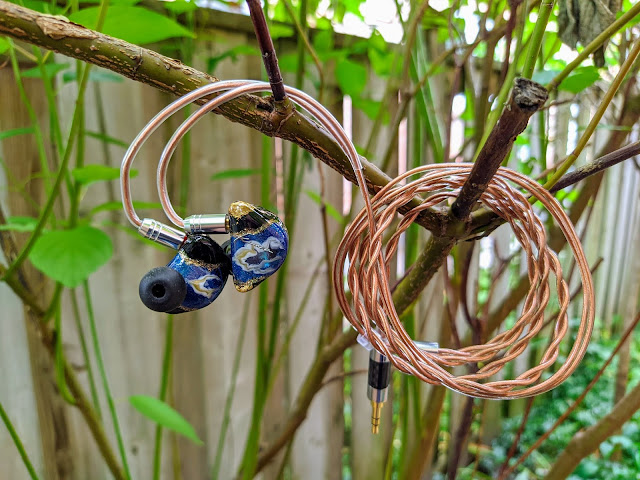 The Kinera Freya probably has the most over-the-top unboxing experience of all the IEMs I've reviewed. It comes in a large hexagonal box and no less than four little pamphlets with ChiFi marketing phrases. Beyond the marketing material lies the Freya, a set of S/M/L tips, a Lightning dongle, a cleaning brush, a 3.5 mm to 4.4 mm adapter, and a circular carrying case. Inside the carrying case is a 2-core copper 2-pin cable, a USB-C dongle, and a set of Final Audio tips.
The fit of the Freya is on the bulky side as it has a fairly large nozzle diameter but otherwise the fit is comfortable. Isolation is decent. I preferred the included Final tips and used them throughout this review. The cable looks like a copper-colored Tin T4 cable but it feels nothing like it. This cable is a much stiffer and has a stronger cable memory. The cable noise isn't too bad though. The shells look nice but it definitely photographs much nicer than it looks in real life I think. 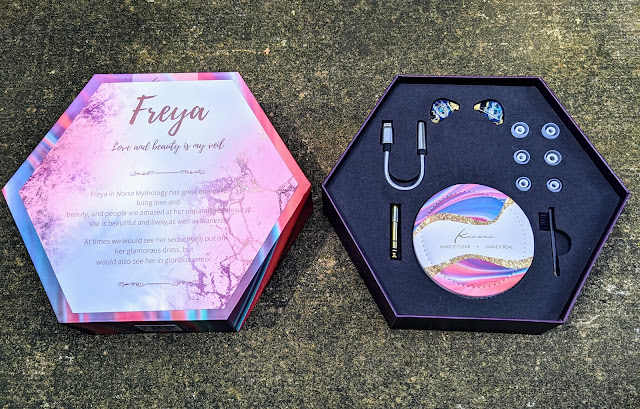 My first impressions of the Freya were lackluster. The tuning of the Freya is heavy emphasis on midbass and low mids that's balanced with upper mid presence. Treble is a little on the muted side and peaky. It's an asymmetrical V-shaped with more emphasis on the lows than highs. The coloration of the Freya's tuning initially caught me off-guard but as I spent more time with it over the course of this review, I started to enjoy it. I'm generally not a fan of this type of tuning but I can see why it appeals to certain folks. It's a non-fatiguing listen with a warm body. The Freya works best for pop and light rock but instrumental works or technical music are non-ideal.

The Freya is certainly bass boosted. There's a subbass roll off under 40 Hz but beyond that is lots of bass that bleeds into the mids. While you can certainly feel the note, it doesn't rumble or slam. Its boomy and thumpy. This is most clearly heard in the kick, where every note has a weighty, thumpy sort of sound. In certain recordings, this type of sound can be quite addictive, especially when coupled with great bass guitar playing. The Freya does a competent job with note separation in less busy tracks but starts to struggle with clarity when push comes to shove. Timbre is... fine. It's a tad too colored and lacking texture in the thumpiness for me to rate it higher but if you're looking for that engaging live concert sort of chest pounding sound, the Freya's bass tuning invokes a bit of that. As a whole, I'm mixed on the Freya's bass. The tuning is kinda like fast food: an enjoyable, addictive little reprieve every now and then but is ultimately shallow and leaves me wanting for more substantial and nuanced.

The mids of the Freya are undoubtedly warm owing to the bass bleed; lush, if you prefer flowery language. Despite being a hybrid IEM, I don't actually notice the crossover between the DD and the BAs. In fact, if you told me this was a single DD I would be inclined to believe you. The only place I get a sense of the BAs is in the treble. In the mids, I moreso notice the rich tone of stringed instruments while the low mids have a bodied sound that is particularly suited to moody notes of the synth and piano. I fully expected the bass and low mids boost to overshadow the vocals. Thankfully, this isn't the case. The vocals are forward enough that it doesn't sound suffocated while maintaining the aforementioned "lush" tone. I do think the overall tonality of the vocals could be fine tuned for a sweeter upper mid presence. It feels excessively warm with too early a rise for the pinna comp.

The treble is on the muted side for a less fatiguing sound. There is a notable lack of brilliance to brighten things up and forget about airiness. The drawn out, shimmering decay of the crash cymbal quickly loses energy while the sharp, crisp sound of the hats is clearly attenuated. There are occasional splashes of treble energy giving a sense of non-uniformity to the treble. I think this has to do with a large dip right around the lower treble starting at about 5 kHz, a peak around 7 kHz, and the subsequent roll-off of the upper treble. In the grand scheme of things, the Freya's treble is barely passable. The treble makes sense with the overall tuning of the Freya to complement the low mids emphasis but it doesn't always sound right thanks to the dip, peak, and roll-off. At the very least, I applaud the Freya for not overdampening the treble for an overly safe sound like that of the Moondrop Starfield.

The soundstage is fairly average for an IEM in terms of height, width, and depth. Imaging is above average beyond the standard 3-blob sound and feels well suited to the soundstage though there is a lack of layering. The staging has a sense of being contained but not congested.
On the surface, the resolution of the Freya isn't outstanding. But if you listen closely, there are glimpses of micro-detail interwoven into the sound that enhances the overall listening experience. As whole, I would generally put the technical ability on the level of good budget IEMs about $50-100. Compared to great IEMs like the Tin T4 or Moondrop Starfield, the Freya is a clear step back. 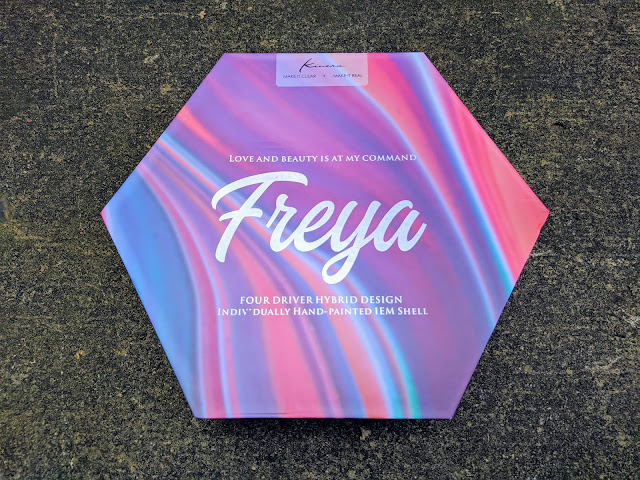 No. I find the Freya to be reminiscent of the old ChiFi tuning. It may look pretty and come with an extraneous amount of marketing material, but it is fundamentally another fairly sloppily tuned V-shaped IEM with excessive bass bloat into the mids. I find that over time as I listen to IEMs I initially dislike, I start to look past their flaws and the Freya is no exception. Once I got over the highly colored tuning, I began to enjoy the Freya more as an IEM for background music while working. The thumpy bass, warm tone, and non-fatiguing treble makes it engaging enough for long listening sessions without being too in-your-face and demanding of attention. It's an easy-to-forget type of sound for when you want to focus on different tasks.
The biggest problem with the Freya to me is its price. It just isn't much better than good $50-100 budget IEMs really. The $250 price tag is expectant of quality that simply isn't there. The tuning isn't anything special and its technical ability is middling. Maybe about $100 would be more justifiable. After all, the BGVP DMG exists and has a similar sort of tuning for about half the price. Kinera may have dressed the Freya up as extravagantly as possible, but ultimately that's all it is. A nice looking IEM that sounds OK and photographs beautifully. That said, I don't want to be too hard on it. It may not be a price-performance winner but I did come to enjoy it while writing this review. The Freya is an IEM I'll probably pull out once in a while to listen to if I'm going to be working at my desk for an extended period of time. But as a reviewer, I can't justify any reader buy it. If you already own a Freya and are happy with it, don't let this review persuade you otherwise.