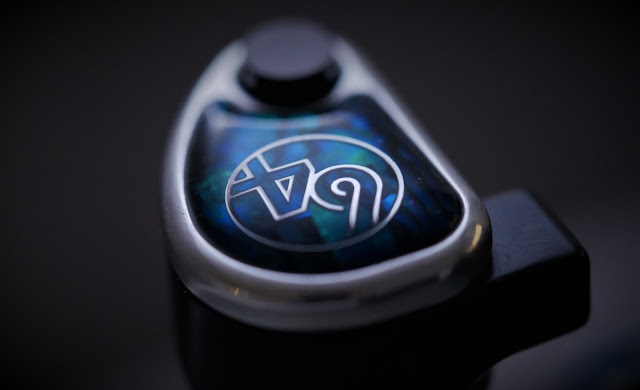 In this review, I will be discussing the latest in-ear monitor (IEM) from 64 Audio. The Nio is priced at $1699, which makes it the lowest-priced model in their universal audiophile series of IEMs. This model is not offered as a custom at this point in time, though it does have some semblance to the custom N8 model.
The Nio is a hybrid model, featuring a dynamic driver for the lows, 6 mid-range balanced armatures, 1 mid-treble balanced armature, and a single tia driver for the treble. Like other models, the Tia driver is essentially an open-back BA driver, and the Nio also features the Linear Impedance Design (LID) and APEX modules for releasing pressure through the outer shell of the IEM.
The APEX modules are not only for pressure relief; they can also be switched with the two additional included sets to tune the sound profile quite a bit, and I'll discuss those differences in this review.
The Nio takes on a similar shell design to others in their current lineup with the tear drop shape which some people may find comfortable and some may not. I personally find it very comfortable given the right set of tips and cable, which I'll discuss a little later. 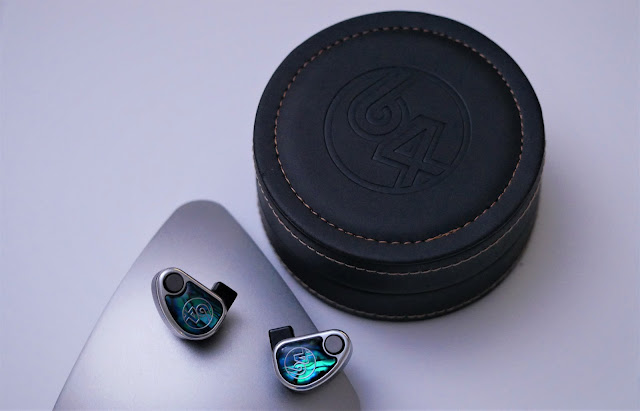 The faceplate replaces the boring plain look of previous models, which remind me of just a sticker placed on the aluminum shell (see U12t), with a very attractive blue-green highlighted abalone in-lay that sparkles and glistens in lighting and different viewing angles. The chrome-colored shelled finish, along with the abalone centerpiece, make this Nio a stand-out set in terms of beauty and eloquence in the 64 lineup.
One other thing to note is that the case that is included with the Nio is a updated case that is round and much more attractive than the previous hard plastic box that came with previous models. This provides are more appealing look to carry around which is a nice addition to one of the minor complaints I had with other 64 models. The cable is pretty much the same as usual, which means, I highly recommend spending cash on a replacement cable immediately. The default cable it comes with isn't the most easy to handle and the pre-hook design makes it hard to keep a good seal in my ear. This is definitely my own personal experience, but I have heard similar issues from many other users as well.
Before I get into the sound impressions, I do want to thank Headphones.com for sending this unit on loan to me for review! 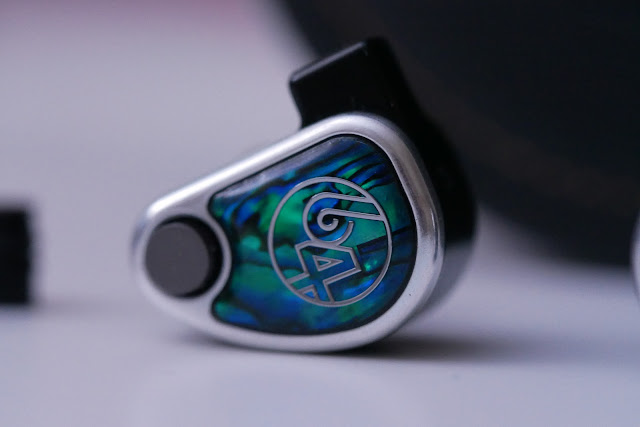 The Nio is a bass-focused, but also a balanced IEM with a nice warm signature that is FUN. If you've read my reviews in the past, or have spoken to me in-person or online, you'll know or get the impression that I am much more of a neutral-target preference type person, but the recent releases of the Mest, and the Nio have made me question whether I am just a closet basshead or not. So, at this point I just gave away my impressions of this IEM -- I like it. I like it a lot!

Taking a step back, I reviewed the U12t, also from 64 Audio, several months ago, and gave it significant praise. It's still in the top of my recommendation list for a top tier IEM, but I've always been looking for a nice hybrid set. Well, the Nio is pretty darn good and similar enough to the U12t tuning.
It is heavier on the bass end with the dynamic driver pounding away at your ears and giving a fun, but also natural decay and slam and providing some of that fun impact that you can't always fully replicate with balanced armatures in the U12t despite how well it does it. Texturing capability in the low end is really nice, though it's not necessarily as resolving down low as a balanced armature is, and the amount of bass the M15 module provides can be a little over-done at times and can cause a very small of smearing.
The Nio presents the midrange with a warm and lush sound, but not too thick that I'd consider it gooey overly intoxicating. There's not a sense of richness to it that overemphasizes anything in the midrange. That's because I feel like the midrange is generally flat but with a bass shelf that starts in the lower midrange, and the upper midrange is inline with a proper pinna rise that balances male and female vocals well. It's coherent, but still suffers in with some slight disjointedness between the low end dynamic driver and the midrange-balance armatures. This is a bit more apparent due to the significant micro-dynamic slam and punchiness that the Nio low-end generates, especially if you get a great seal.
The treble is a bit on the laid-back and soothing side. It's generally relaxed and tame, but extends well enough. I'd put it in-line with how I felt with the U12t. It's perhaps a little too recessed for my preferences, but only slightly. Instruments are well defined though, and I never get the sense that there's major timbre issues or any thing totally lacking adequate upper harmonics, and that's a good sign. Many hybrids I've tried fail due to either coherency issues or too much coloration in my opinion.
Imaging is actually very good on this set. I liked the amount of instrument separation on the M15 default module and it's soundstage was a little wider than I actually expected, and is about on par with what I remember the U12t having. Orchestral pieces with a lot of instruments are well defined and picked out easily. The amount of bass can make some complex rock and electronic passages a little challenging, but not to the point where I will make a complaint about, except when using the M20 module, which I'll talk about now.

I'm going to take a quick break to start talking about the modules. The Nio comes with three sets of the Apex modules that 64 Audio uses on all their audiophile IEMs. With the Nio, 64 Audio introduces the MX module, which is the least isolating with a -10dB noise isolation rating as opposed to the -15dB and -20dB of the M15 and M20 modules that have been standard included accessories with the universal lineup. 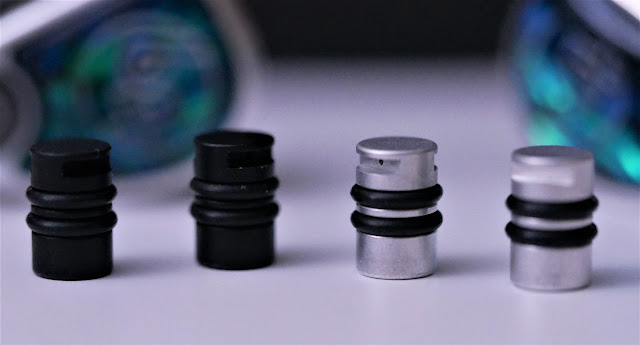 Each of the 3 modules included have some sort of effect on tuning.
The M15 is the default module pre-installed on the Nio out of the box. It's my preferred sound signature of the modules and I'll cover the differences of the others before going into more general sound observations
The M20 adds a touch more bass and less treble over the M15, and I quickly found that even though the measurements are very near similar to each other, that the M20 sounded more compressed in both dynamics and soundstage. The bass has a slight bigger impact and slam, but makes it rather muddy as well. I just found the M15 was already bordering on too much at times, and that M20 brings it over the line for me.
The new MX module is an interesting one. It somehow completely removes the bass and leaves the Nio to have a little bit more of a neutral tuning with a small bass bump, but with rolled-off sub-bass frequencies. Normally, I do like a more neutral tuning, but in the case of the Nio, I felt that going with the MX module removed the fun factor of the M15 while not having any subbass rumble in the MX. In this case, I find the MX a bit too lacking in enough good qualities despite a cleaner sound signature.

The Nio keeps surprising me on every listen. Yes, it's not something I typically would enjoy -- bass is plentiful, treble is relaxed, and upper mid-range is a tad hazy, but there is a nice refreshing alternative to my normal listening gear and the fact that the minor colorations are not distracting, and in fact, quite pleasurable make this a great IEM for a lot of music.
In The War on Drugs song, "Eyes to the Wind," from their Lost in the Dream record, I find the Nio pushes Adam Granduciel's lead vocals forward with a distinct and clean sound. Maybe it's a tad too edgy sounding, and lacks a little breathiness, but it sounds clearly defined from the background smattering of buzzing guitars, keyboard synths, and a drum and bass line that continue to pound and provide a careful and intricate amount of layering and a body of sound that is well textured and scattered across a sea of noise. The wall of sound is harmonious and has power and a very natural amount of resonance and decay on the Nio, making this type of music a stand out pairing for me.
The famous intro to "Such Great Heights" by the Postal Service is an alternating panning of simple tones scattered across with an average amount of width on the Nio. The build-up continues with a heavy bass synth that ends up carrying the entire song. On the Nio, this bass line has a a small rumble that continues throughout the song. It isn't the most defined I've heard it, but it does have a feel to it that is a nice alternative. Ben Gibbard's voice throughout the track is soft-spoken, but still brought forward and is carried fairly naturally with the Nio. If anything, it might be a tad too forward.
In the classic, "People are People" from Depeche Mode, the Nio flat out blasts your skull from left to right with the heavy drum beats smashing on both channels. A lot of these Depeche Mode and New Wave tracks have a heavy palate of electronic and real drums that I feel need a well-tuned dynamic driver to carry the weight correctly. The Nio is a nice balance here since Alan Wilder's drums take advantage of the dynamic driver, while the rest of the heavily synthesized tracks from the famous band are handled the BAs. Dave Gahan and Martin Gore's distinguishing vocals sound fine in this track, though Gahan does lack a little bit of the powerful gusto that I am sometimes used to.

I could probably go on and on with different music and how they perform on the Nio, but overall I am left with a lot of smiles listening to this IEM, which I wasn't totally sure I'd like or not. I've been hunting for a hybrid IEM that can do the low end well, while retaining the resolving nature of balanced armatures, and it's been a challenge to find IEMs that do all of this while still retaining good coherency and tuned well.
The past several months have seen the release of the Unique Melody MEST, the Campfire Solaris 2020, the Thieaudio Monarch and Clairvoyance, and this 64 Audio Nio. All of these are excellent performers, and it's a tough decision to recommend which one, as they are all good in their own way. The Nio is probably a generally safe bet for most music listeners, though it does stray a little heavy on the low end, so perhaps those who like less bass may not need apply. That said, as someone who tends to stay more neutral in bass quantity, I enjoy these a lot, so there's that. 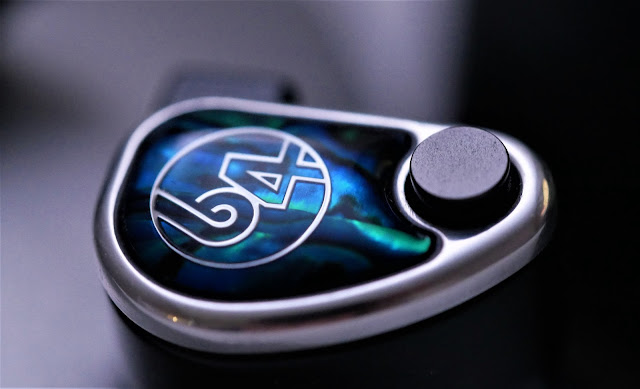