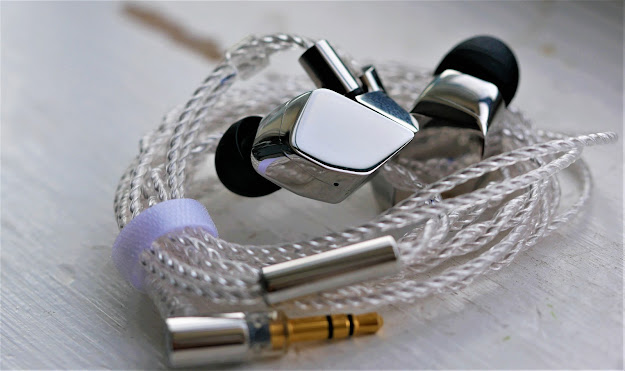 I normally would have done a full-length review on these, but due to a couple circumstances, I am only going to post some impressions of the Final A8000 In-Ear Monitor this time. This had mostly to do with fit, some to do with sound, and a lot to do with the amount of loaner products I have had the past few weeks that I need to finish up with.
Really quickly though, the A8000 is an all-new full beryllium metal driver IEM that comes from Japanese company, Final. I will admit that most of the stuff I have heard from Final have been not to my desired traits, tastes, and preferences. They tune to very niche markets and may not be for everyone.

The unboxing experience of the A8000 is one of a kind. It is probably the second best I've seen personally, with number one being fellow Japanese company Sony, with their packaging experience for the IER-Z1R.
The cable is a beautiful silver braided cable with metal connectors and splitter. The case it comes with is a round silicone/hard case that is unique and very well made. The overall packaging is full of fancy paper, and lots of unwrappings, and is one of the more premium experiences.
The shell design of the A8000 is extremely attractive, however I hate it at the same time. The large size, the sharp edges and corners, and gap between the two parts of each shell just make the experience of wearing these rather painful. The shallow nozzle also makes it very hard to get a good seal as well.

The A8000 has a warmer than neutral low end but still sounds very lean due to it's large rise between 2-8KHz. There's a lot of energy in this treble region which can cause some problems from both timbre and general harshness.
I found the low end to sound fine, though lacking any sort of slam, rumble and great microdynamics. The mid-range is a tad lean, but balanced. The treble really bothers me though. It's brighter than neutral and to the point where I find my ears ringing after just 15 minutes of playback, even at low volumes.
This was greatly apparent when I listened to Chrvches and Civil Wars. The female vocals and guitar strings and synths are just a barrage of treble sounds that quickly sound a little too forward and spikey that while it doesn't necessarily sound harsh during playback, the ringing sensation is quickly apparent after removal of the IEMs.
This happened no matter what music I was listening to for the most part, and I felt like this IEM just does not play well with my ears, both from my ear drum level and from the outer ears where the shell design is just too awkward to sit correctly in my ears.
The Final Audio A8000 was provided on loan from Headphones.com