The Sony IER-M9 originally came out at the MSRP of $1499 but has since dropped down to $999 in recent months. This puts in the shouting distance of other multi-BA IEMs like the Hidition Viento and the Moondrop S8. Unfortunately, I have not had a chance to hear the S8 yet, but I was very excited to try the IER-M9 and see how it stacks against my custom Hidition Viento-B.
This unit was sent on loan to me by community member, tma6. Thanks!

The IER-M9 is a 5-Balanced Armature driver in-ear monitor that features a black magnesium housing with a carbon fabric looking decal in the front. The shell is very lightweight, surprisingly, and feels premium. It also is very comfortable in my ears and I had no issues wearing these for long periods of time due to the nice shell design, weight, and comfort. The cable is also wonderful to use.
In fact, the silk-braided cable is housed in a nice soft rubbery-sheath that is easy to move around, unwind, and doesn't tangle easily. It terminates in an L-connector of both 3.5mm and 4.4mm varieties. Yes, there are two cables included in the box. The connectors of choice for the Sony IER-M9 is mmcx, it fits in a recessed opening on the M9 shell.
In addition to the cables, the M9 comes with 13 sets of tips to choose from, as well as a carry case, and a series of other accessories. The unboxing for the M9 is quite nice, though still lacks to the drawer box approach of the IER-Z1R.

The Sony IER-M9 was mostly paired directly with my Sony NW-ZX507 digital audio player for the majority of the time I used it for this review. I also did try it alongside the Topping A90/Schitt Bifrost 2 combination, and an iPhone 5S. The Sony-Sony pairing is a popular one in the community and I've seen a lot of impressions of the M9 paired with the 507, so I was excited to see how these aligned with my own thoughts.

As general blanket statement, I found the Sony IER-M9 to have a warm, enjoyable and extremely coherent signature with outstanding mid-range and and generally laid-back and almost boring sound signature. I use the term "boring", not necessarily in a negative way. It's just an inoffensive sound signature that doesn't have any stand-out feature in its tonality/timbre that makes it either wrong, colored, or the like. I wouldn't necessarily call the IER-M9 reference tuning, as I do find it a little warmer and a little dark, but not overly colored.
Let's start a little differently this time that my normal reviews. I find the M9's coherency outstanding. The multi-driver setup seems to be well designed and doesn't show any disjointed sound across the board. Add to that the really strong resolution, and it seems like Sony knows a thing or two about how to make a good sounding cross-over setup and maximizing each driver's potential.

In the same sense, this is the same experience I found with the Hidition Viento in both the universal and the custom versions. Like the M9, it also featured great coherency and good resolution despite having less drivers than other models which tout tons of drivers. More does not always mean better. 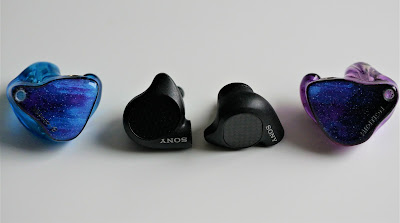 To go on further with the comparison to the Viento-B, I find that both share a lot of similarities. The M9 does have 1 additional BA driver, but both are priced similarly now, and have outstanding mid-ranges where everything just sounds accurate and reproduced well. They both do lack some of the resonance and natural decay that comes inherently sometimes with the use of a standard balanced armature driver, but that's fine for their use cases.
Where I do find that they differ a little bit is in the tuning. The Viento is more reference neutral to me, and when compared to the IER-M9, the Viento has a more focused upper mid-range and even treble region, that may sound a little bright and lean compared to the M9. The M9's additional warmer lower-midrange also adds more body to the sound, and one can't really go wrong with either of these for a solid multi-BA setup under $1K. It's more about picking your tonal preferences.
Okay, I skipped a bit from my normal routine, and now I not only spoiled how I feel about the M9, but also how I compared it to what I consider it's biggest competitor in it's price class. Let's move forward with some music discussion. 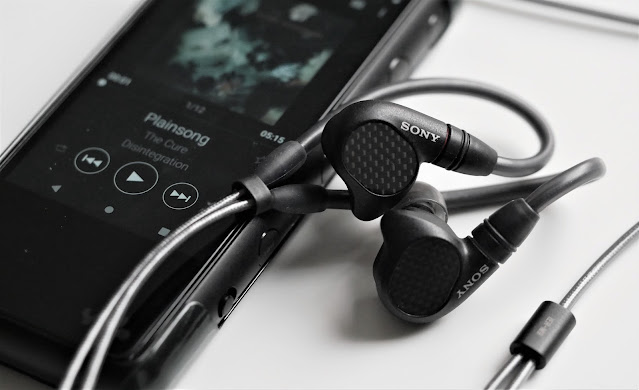 I found the M9 to really go well with singer-songwriter type music. I listened to a lot of James Taylor with the M9, and really enjoyed how it presented the softer acoustic guitar songs of the famous musician. The bowed bass guitar on "Fire and Ice" has a nice amount of rumble can be pictured just slightly behind the rest of the instruments in this track, lying a little further back in the scene with its soft growl. The guitars are just over to the left of my hearing, and Taylor's voice is dead center, perhaps a slight bit to the right. The effortless vocals are shown in all their greatness with the M9, and the warm body really helps give his tender vocals in this track some character.
I didn't talk a lot about imaging characteristics a lot until just now, and I do think overall that the M9 excels in this area. It has a nice soundstage that isn't exactly wide or super deep, but it's a good playing field that's above average width and in the upper tier in terms of depth. This allows instruments to sound well separated and it makes the M9 sound open and free of chaos in the most chaotic tracks like Daft Punk's Contact.
The entire lead-up to the finale of this track sounds very detailed and intricate on the M9. The kick bass hits with some authority even if it does not have the slam and decay of typical dynamic driver like it's older sibling, the IER-Z1R. The cymbal crashes sound accurate but not over-done and this constant beating can sometimes be fatiguing on many headphones and in-ears. Again, what is most impressive on the M9 is how effortless it handles the battlefield of this track, with instruments smashing in all directions as it leads to its final build-up and closure. There's no muddiness, no meshing of sounds, and no blunted sounds. Everything comes in well-defined and clean.
My current addiction drug is Tingvall Trio, and specifically their "In Concert" live album. I'm finding myself craving the track, "Movie," for it's sweeping piano melodies, and constant snare drum attack, and heavy bass notes that keep everything gelled together. I normally enjoy this type of music with my Viento and Hifiman Arya, both more reference and neutral-bright signatures. But the added bass warmth of the IER-M9 does give the low end a little more body and power to it. The slightly darker treble helps give these types of songs a nice romantic-type sound approach that is easy to enjoy for long periods of time, while not losing any of the soundscape.

I've said a lot of praising remarks to the IER-M9 and the question to be asked is, where does it rank and will you buy it?
The second question is a quick, "no." And it's not because I don't like it. I do like it, but I don't find it different enough than what I own now to make it a purchase. I already have the Hidition Viento-B, and its tuned closer to my neutral preference target, and I prefer a little more air, and a little more upper-mid range than what the IER-M9 provides, but in many ways, I could go either set, as a stand-alone multi-BA IEM to use .
As far as the first question, I think the M9 stands on and near the top of the IEM playing field. It's not the best multi-BA IEM, as I still believe that title goes to either the qdc Anole VX or the 64 Audio U12t, but it's that small tier below where the Hidition Viento and Vision Ears VE8 reside for me.
At $1000, I think this is a nice buy that comes with a great accessory package and a great build. It has a few minor flaws, that are more preference things than anything else, but that's typical in this price category where preferences matter more. Good work Sony.