It's always interesting to see a brand grow from its infancy into a full-fledged competitor and this is how I am starting to feel with Thieaudio, Linsoul's house brand of portable audio gear. They started with headphones, and then moved to their bread and butter IEM products with the Voyager (multi-BA) and Legacy (dynamic driver + BA hybrid) products. I've reviewed a few of their products in the past with mixed results, but this latest batch of products -- the Clairvoyance and the Monarch -- come with great anticipation and a certain bit of hype.

Being involved in the community, I've gotten to discuss the tuning and progression of this brand through their owner, as well as these two specific IEM's tuning wizard. It's because of this, and the thoughts behind how it should be tuned that got me most excited to try these two sets out, as they were tuned with an objective and for the most part, I think these two do their tasks well.
This review will be a little unlike others I've done mostly because these are two similar but unique IEMs with slightly different tunings. I'm going to spend most of this article talking about how they differ than anything, but just remember that both of these are top tier IEMs in my opinion and hopefully I'll capture that as well.
The Thieaudio Clairvoyance is $700, while the Monarch is $730, and both are tri-brids featuring dynamic driver, a series of balanced armature drivers, and electrostatic tweeters.

I posted a video of the unboxing experience and will just leave it at that:
To quickly summarize though: 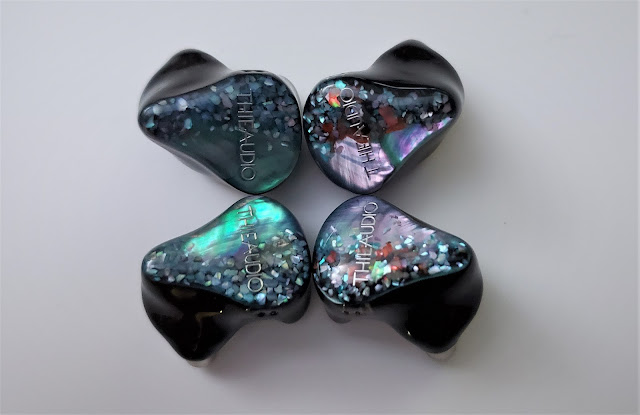 Both the Thieaudio twins, the Monarch and Clairvoyance, are well-balanced tunings with sort of reference mid-range and treble, but with elevated bass to provide a nice fun, but accurate sound. They do differ across the spectrum though, and I find the Monarch to be much more sub-bass focused and have a shoutier upper mid-range and a brighter treble. The Clairvoyance, on the other hand, is a more smoother overall sound signature, with a thicker bass region that doesn't emphasized sub-bass, and adds more mid-bass to the sound. The upper mids of the Clairvoyance is also slight tamer, as well as the treble presentation, making this one sound a little less technical, but more musical.

When I listened to both, my first impressions were that the Monarch is right up my alley. It has the reference-type sound I really like, with a similar comparison to the Hidition Viento, but with a bigger sub-bass emphasis. Listening to it more and more, and comparing it to the Viento, I did find some things I did not like -- and that was mainly the slightly nasally and shouty upper mid-range. These are very nitpicky issues, and not overly glaring however, but it is something I notice when I listen to piano music where the weight of a piano strike in this range hits harder and with more ringing.
The Clairvoyance is more equally weighted in the low-end than the Monarch. I found the Monarch to have a large subbass emphasis, while the Clairvoyance has more mid-bass, but it's more to put it in equal playing with the subbass. In this regard, the Clairvoyance provides a more natural low end sound, and a thicker lower mid-range, while also having a more unemphasized upper mid-range and treble. The Clairvoyance does lack the deep rumble that the Monarch has, but it replaces it with a more smooth and full sound.
This is a really generic genre chart that I came up with based on music I listen to and a small sample of random music within these genres. 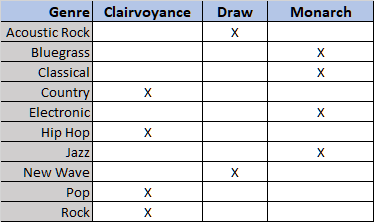 In both acoustic and new wave music, I found that there's trade-offs for both of these IEMs, but both play them well. Depending on the acoustic rock though, I do partially prefer the Clairvoyance more, and with New Wave, I do partially prefer the Monarch more.
In the genres of Bluegrass, Classical, and Jazz, I prefer the Monarch over the Clairvoyance. This is due to my impressions that the Monarch has a little bit of a bigger soundstage, better imaging, and a little improved resolution over the Clairvoyance. The deeper sub-bass also gives double bass guitars a bit more rumble and drive, which tickles my ears.
When I play rock music, pop, and country music, I tend to prefer the more full and smoother sounding Clairvoyance. These genres seem to perform better with the mid-bass addition that the Clairvoyance provides, and the slightly tamer treble, does make electric guitars and any constant high percussions attacks from becoming overly fatiguing.
There's very distinct difference when listening to these two IEMs when I listen to my stable of rock music -- whether it be the layered rock tunes of Sonic Youth or The War on Drugs, or the Seattle grunge originals, Temple of the Dog and Mother Love Bone, or the more catchy tunes of The Beatles and Fleetwood Mac -- I find the performance of the Clairvoyance is much better suited for these bands.
One of the most distinguishing bands that really show off the differences between the two of these IEMs is Daft Punk. I listened through the entire Random Access Memories album on both of these, and there's some very audible differences. In "Giorgio by Moroder", the sub-bass focus of the Monarch really shows its strength towards the end of this track where the heavy bass is skull crushing while it sounded rather tame, but filled-in, on the Clairvoyance.
On "Contact", the final section of this track is a insane mix of sounds, percussions, synths, and a heavy bass line. Many IEMs fail to give proper instrument separation and also clearly define each layer of this multi-layered track. The Monarch handles this song with absolute ease. It's quicker transient response and improved imaging over the Clairvoyance really shows its characteristics here. That's not to say the Clairvoyance fails, because it doesn't but it just doesn't quite have the separation capability nor does it have the raw bass impact that the Monarch provides, and this is why I feel like in EDM music, the Monarch's added clarity and sub-bass focus makes it a more fun and exacting experience. 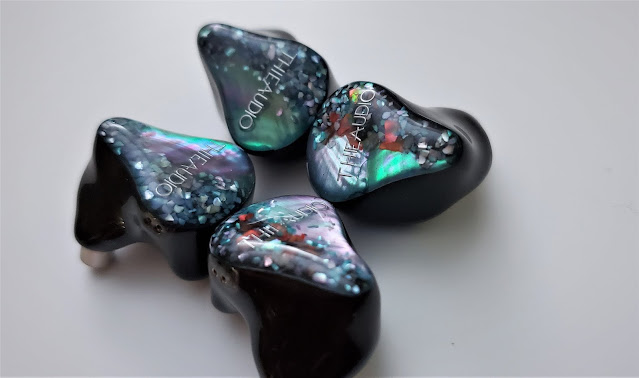 At this point, I just want to reiterate that both of these IEMs, the Clairvoyance and the Monarch, are two of my favorite IEMs that I have listened to, and the fact that they are tri-brid IEMs at a relatively low price makes these two sets a industry disrupter and a market statement from Linsoul and Thieaudio. There's little to not like here, and recommending these sets is easy for me. They work well with a lot of music, and they have a price well below comparable products, and in fact, you can get both for the same price of it's competitors. That's saying something.
Let's talk about some of those competitors....

The U12t and Nio are two pairs of similar IEMs from 64 Audio that are also in-line with the Thieaudio twins. The Nio is a bit bigger in it's bass presence, in the fact that it hits harder with more slam and impact, but not so much as it's subbass. When looking at that, I think they are comparable to the Monarch. The Nio is probably a good mix of both bass characteristics of the Clairvoyance and Monarch, but more emphasized than both of the Thieaudio products. This is mostly because the treble is more tame on the Nio and U12t than the two Thieaudio IEMs. The Monarch is clearly the set that has the most bright signature.

I was not able to demo the MEST side-by-side with the Thieaudio Monarch and Clairvoyance, so I don't have any opinion that can be fully taken. From memory though, I feel like the MEST has better texturing and imaging ability than both the TA products. The MEST is a tad narrower at times, but it has a chameleon-like soundstage that morphs around depending on the song. I think resolution of the MEST is top notch, and may be slightly better than the TA, but the Monarch and Clairvoyance have it beat for tonality and are easy to recommend for overall non-fatiguing listening.