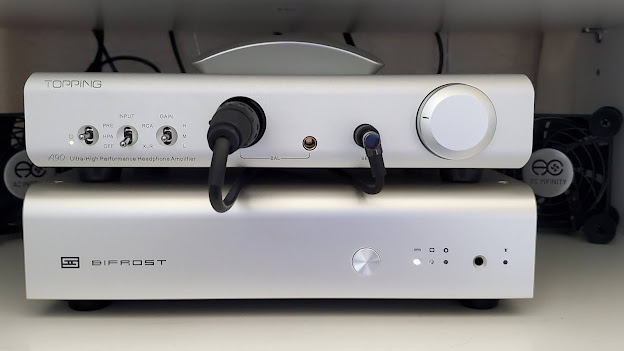 The A90 is a linear solid-state amplifier from Topping out of China. Topping's recent lineup of amplifiers and DACs have received a lot of praise for their ultra low noise measurements and objectively have been found to be in the top echelon of high measuring amplifiers for headphones on the market. The A90 was designed by a community member who joined Topping recently by the name of John Yang. This amplifier, according to reviews, tops the Signal-to-Noise ratio and distortion numbers of even the highly regarded THX amplifiers such as the Massdrop THX 789, SMSL SP200, and the Benchmark HPA4.
These impressions won't dive too much more into measurements, but will focus more on my user experience and listening impressions.

The Topping A90 has a nice array of switches, knob, and input/output options. It has both RCA and XLR input and output on the back, and an internal power supply unit, so a standard power cable will work fine with it.
On the front, it has a large volume knob that has a nice balance of smoothness and weight, and blends in nicely with the silver chassis. On the left side are three toggle switches controling the power on/off, headphone amp or preamp function, and one of three gain modes. There is also a power flip switch on the back on the power supply.
For headphone output, there's the standard option of 1/4 inch single-ended amplified output, as well as balanced options of 4-pin XLR and 4.4mm Pentaconn. One of the driving factors for me obtaining this amplifier was for that 4.4mm output as I have grown very fond of this connector and have switched all my IEMs and headphone cables to this connector type.
Now, onto the not so good -- ground noise.
There's a chance that if you use RCA stereo coaxial inputs as your source into the amp, you may get humming or ground noise. I experienced this when I used my Schiit Saga+ Preamp, but it did not occur with using the Schiit Bifrost 2 DAC when paired with RCA connectors. One thing to also note was that this loud humming noise was really bad when I had plugged my iPhone 5S into the Preamp as a secondary source, even when it wasn't the selected source input. It seemed the noise worsened significantly if it was being charged, and decreased when unplugged from power. That said, the Saga+ going into the A90 still had a ground noise that was audible.
Using XLR input totally kills this problem but it is something to note. Topping/John Yang mentioned that this is probably due to the design choice of using an internal power supply unit instead of an external power brick, however, I will note that I never heard this noise using the Schiit Saga+ connected to either the Schiit Asgard 3 or the Schiit Jotunheim, which also both have internal power supplies.

I have owned several THX amplifiers in the past, and have also owned a couple Topping Amp/DAC combos and most recently I've used the RME ADI-2 DAC, Schiit Asgard 3 and Jotunheim, amongst many others for solid-states. They aren't necessarily my primary listening devices though, as I typically am using one of my tube amp setups for general headphone enjoyment. But I still use IEMs via solid-state amplifiers and headphones on them for review purposes.
Of all of them, I believe if there was a meaning for the term sterile in regards to sound, I think the Topping A90 is the sterilest of the the sterile crowd - which I'd lump in the THX amplifiers I've owned -- The Massdrop THX 789, Monoprice THX788, and the SMSL SP200, and to some extent, the RME ADI-2 DAC.
As I have mentioned in my previous reviews on sources as well as headphones, iems etc, I am somewhere in-between the objectivist and subjectivist spectrum, while being an engineer myself, I do lean a bit to objectivism. That said, when I do reviews, I am critically listening, and switching A-B when comparing sources and amps and create my own subjective, and probably biased, opinions at that. And as always, things may sound more exagerrated than reality for the purpose of pointing out any differences.
The A90, outside the humming issues, has a very black background via XLR, and in my opinion, a colder tone. Coming directly from the Schiit Jotunheim, which I thought was a cooler signature than the Asgard 3, I found the Jotunheim to be warmer and bloomier. The A90 has a sharper edgy sound to it, that is a bit more forward sounding, especially in the upper mid-range and treble regions. I actually do like the bass response, as I am one to like quicker transient responses at times, and I feel like this one definitely has a noticeably different type of agility than the Asgard 3 (for sure) as well as the Jotunheim.
The sharper and edgier sound is something I also found in listening critically with all the THX amplifiers I've used and to a lesser extent, the RME ADI-2 DAC. Unfortunately, I do not have any of those amplifiers with me to A-B, so my impressions are mostly from memory. Now with hopefully all the other disclaimers out of the way, I think the A90 may be the most forward sounding of the bunch. I do feel it lacks a little bit of soundstage depth, especially compared to the Jotunheim and my current tube amp setup, the Feliks Audio Elise.
Most of these impressions were using the ZMF Verite and Hifiman Arya headphones out of the balanced outputs, but when it comes with using IEMs, I am quite okay with this more sterile sound for whatever reason. The noisefloor is quite small and the ultra low output impedance is great for IEM usage, especially ones that are sensitive to impedance mismatch and/or have high sensitivity. This is a farcry from the iFi Hip DAC and iFi Zen DAC, which I am demoing and use at work for IEMs (respectively). Both of these have really poor noise floors and audible white noise comes out of the 4.4mm balanced outputs on both units.
In reference to the iFi amp/dacs, I can somewhat compare the A90's sound to my impressions of the Zen DAC using their latest firmware upgrade which features their new linear filter. I found that one to also be a little overly sharp in the upper mid-range and treble to the point that it can be fatiguing, just like on the A90. This was one of the primary reasons why I have downgraded the ZenDAC firmware to an older filter which may not measure as well, but is more pleasant in its presentation with less shimmering highs and forward presentation.
This forward presentation does make clear, sounding details and provides a higher sense of resolution though, and those who want details put forth in front of you will find this amp very well at this attribute.

The Topping A90 is lauded as one of the best measuring headphone amplifiers on the market right now, and I can't deny the numbers that the manufacturer and independent analysis has shown. It also has a clean noise floor under the right circumstances, but for my personal take, I don't gravitate to using this as much as other amplifiers.
This is mostly due to the more fatiguing sound that I am not as keen to. I'm also not super thrilled about the grounding noise out of RCA inputs, and while that's not a deal breaker if you can have a balanced DAC, it can be if you do not.
But with all that, the convienences of multiple I/O options as well as the addition of 4.4mm balanced headphone output make this a compelling unit with plenty of power to take on all my headphones with ease. The A90 is going to be a bit controversial I'd say, but it will work for me as a solid-state reviewer unit, and one that I will continue to use for that purpose.
As a final note: the Topping A90 was purchased by myself through Headphones.com. This was not provided as a reviewer unit or on loan.