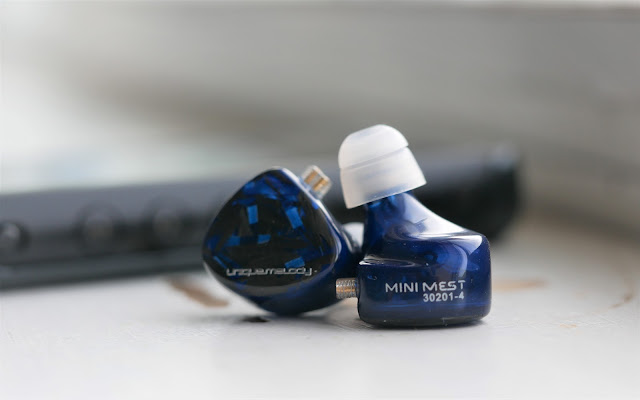 The Unique Melody Mini MEST is the new and smaller sibling of the very likeable MEST that I reviewed a few months ago. The Mini MEST is one of the lower priced products from luxury brand Unique Melody. As of right now, I believe the $599 Mini MEST is the lowest price product in their lineup, which will soon introduce a $300 USD triple-dynamic driver IEM in the near future.
This Mini version strips away both the dynamic driver and the two EST drivers from the larger MEST as well as reduced the balanced armatures count to 3. It still retains the signature bone conduction driver, however, making this a 4-driver hybrid (3-BA, 1-BCD).
One thing to point out on this Mini is that the BA drivers are open-air drivers, similar to the Tia driver used by 64 Audio in their Audiophile lineup. These drivers feature tubeless and unrestricted diaphragms that can give a little bit more of a dynamic driver feel to them, while still being very much a BA. In this case, Unique Melody is using 3 of these types of drivers, and I've been told that the distortion is controlled, and co-mingling of the drivers is enhanced by the addition of the bone conduction driver.
This Mini MEST was provided by Unique Melody and MusicTeck (North American distributor) for the purpose of a review. The link below will take you directly to the product page on MusicTeck's site:
https://shop.musicteck.com/products/um-universal-mini-mest 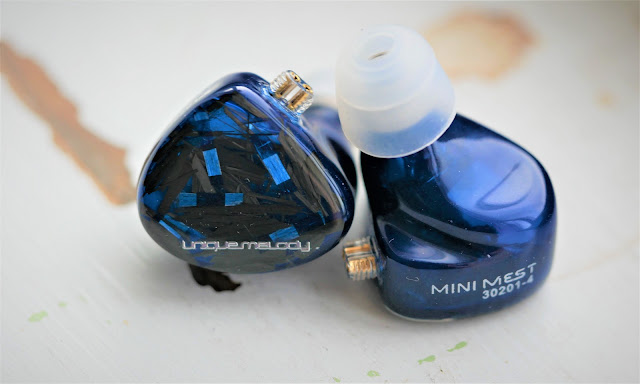 The Mini MEST comes in a small package which contains several tip choices, a cable and case as well as the IEMs. The case is a vibrant blue-themed Dignis brand case that has been custom made by Unique Melody and features their branding on it. Unlike the regular MEST, the Dignis case is made of a canvas-fabric material instead of leather, but is similarly sized.
The cable included is a braided, multi-colored tan/black cable that ends in a 2.5mm balanced connector that can also be optioned with standard 3.5mm and 4.4mm balanced.
For this review, I decided to go with my own set of 4.4mm Kinboofi cables and generic double-flage silicone tips that worked with my ear shape to provide the best seal and response.
In terms of actual shell design and fit, I found the Mini to be, as the name implies, a smaller version of the MEST. It has the same carbon fiber weave look on the faceplate, with blue flakes sprinkled in for contrast and the branding in silver font that shimmers in the light. The shell design is a semi-opaque royal blue color that looks very much solid, though has just enough translucency that you can kind of see the inner workings of the IEM.
The shell, while smaller than the MEST, is similar in depth/thickness and this is a bit more than some other IEMs I've tried in the past. For me, this never came up as a problem. I never have had fit issues with this particular set, nor did I have issues with fit with the larger MEST either.

The Mini MEST has almost a V-Shaped sound signature that I want to say is quite generic sounding, but I think that would be a bit too negative sounding for what it is. It's tuning is very safe and is not unlike other  gentle V-shaped IEMs with a bass shelf that starts early in the mid-range and a rise from 1KHz up through the treble region. Despite this, I never found the mid-range to sound recessed like a V-shaped IEM would, and so perhaps calling it that is not the best name and rather a balanced-warm focused U-shaped IEM would be a better title. But that's a lot of titles for a thing isn't it?

What makes the Mini MEST stand out from other similarly-tuned IEMs is a natural resonance factor that I recently experienced in the Campfire Andromeda 2020. In that IEM, I quickly noticed a more lively atmosphere when listening to acoustical music genres and I can somewhat sense that here too with the MEST. It is a touch harder to hear these nuances though, because there is a heavier bass response, which sometimes can be overwhelming in some songs, but it's also quite fun too.  (This is all relative because some may think my bass preferences are on the lower end of the spectrum than others)
There's a tactility to the bass response on the Mini that I feel is missing on a lot of multi-BA sets out there. Very few can achieve a level of bass decay and tactile punch without having a dynamic driver, and is something I wish my Hidition Viento-B CIEM had more of sometimes. The 64 Audio U12t, for example, has a little bit of decay and punch in it's bass response, and the Mini MEST here does also but to much less extent. I am not going to claim it's as natural as the best dynamics and hybrids out there, but it is a little better than some multi-BA setups in this regard, although I do feel that it can some a little blunted sometimes and missing attack.
The mid-range does not sound as scooped as I would have imagined, and actually has a nice thick and full sound to it. Rock music was my favorite genre to pair with the mini since the general tonality goes well with it. Thicker notes and an exciting treble response make the buzzing guitars and drum hits with more power and emphasis. I found my head bobbing to some Alice and Chains, and Smashing Pumpkins with this set.
I never found the timbre to sound off here. Like the MEST, this isn't exactly the neutral-reference-type sound, and is heavily colored. But somehow, to me, it still retains a natural realistic sound, that is also a little fun and enjoyable, although more boring when compared to the MEST and other IEMs that have more captivating sound signatures.
The technical performance of the Mini is average to above average, and in terms of its price range, I'd say its above average. I think the coherency is quite good with no real disjointed sounds across the 3 BA drivers and whatever the bone conduction driver does, which is impressive given the type of BA drivers they use can lead to a lot of distortion and other issues.
I think the resolution is pretty good, but not on the same level as the larger MEST or other flagships. It has resolution I'd expect from a multi-BA setup that is tuned well, and surprised a bit that some of the nuances stand out still with the heavier bass emphasis that can sometimes become muddy and buried.
It's been a while since I've had a good listen to both the Dunu DK3001 Pro or the Moondrop Blessing 2, but I probably would put it's resolution in between the realms of the Blessing 2 and the more relaxed DK3001 Pro. Both are good IEMs, but I think the Blessing 2 does more technical things than the Dunu hybrid, and I believe the Mini MEST is in-between those two in this aspect.
Soundstage is generally wide but not endless. It's more wide than deep, but provides enough depth to showcase decent imaging capabilities, enough to have proper instrument separation and defined locations in the soundscape. When looking back at the MEST, with its holographic spherical soundstage, this one is very flat in comparison, and has a more traditional left to right stage as opposed to one that engulfs the listener. 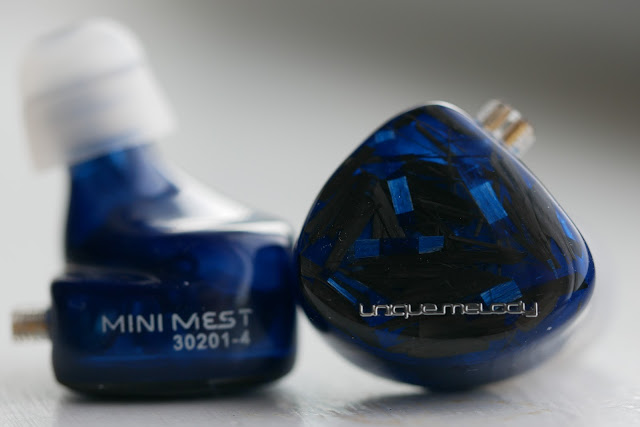 The Mini MEST is a solid addition to the Unique Melody family, which in my limited experience with them has been a hit or miss lineup. In this set and the larger and costlier MEST, I have a bit of renewed interest in this brand again and their interesting alchemy of driver technology, shell designs, and tuning choices. It's always a something unique with their products, and I think this one is one of the more safer approaches to tuning, while attempting something a little clever with their technology.
The Mini isn't exactly the most exciting sounding IEM out there. It's got a kind of tired and overly done sound signature, but it does do a few things well that make it stand out from the rest, and that's a nice mix of BA signature resolution and transient speed mixed with a little extra resonance and tactility that makes it a little more fun of an IEM than the traditional multi-BA.
I do want to give a quick extra bonus wrap-up shoutout to the really awesome looking and feeling case that this product comes with. I even prefer it to the more luxurious one that the more expensive MEST came with.