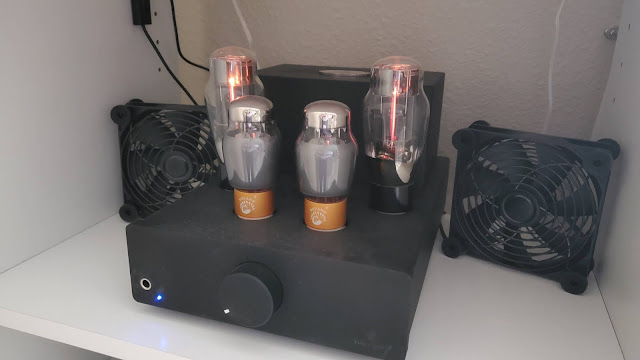 I've gone through a small amount of headphone tube amps in the past, but nothing substantial until I picked up the Woo Audio WA7 Fireflies tube amp and power supply combo. They had an industrial and modern aesthetic that really appealed to me and were a striking centerpiece on my audio desk. Unfortunately, I wasn't super impressed with the sound, at least until I upgraded both tube sets on them. Even then, they didn't have the extra something special I wanted, and I eventually sold it.
I went through the use of a tube hybrid between tube amps with the Schiit Saga+ but eventually got rid of that to. That was to make way for my newest tube glowing toy, the Feliks Audio Elise MK2. Feliks Audio is a small amplifier maker out of Poland, and have been making OTL tube amps for several years now.
They have four main headphone tube amplifiers in their lineup today: the lowest priced Echo, the middle-child that no one talks about anymore, Espressivo, the other middle-child Elise, and the flagship Euforia. The Echo is the newest in the line and looks differently than the very, very similar looking Elise and Euforia, both of which are on their second versions now.
The updated Elise, which I recently purchased, features updated amp internals, fixes, and a switch from TungSol driver tubes to PSVANE 6SN7-UK tubes. I've since upgraded those to the PSVANE CV181-TIII tubes that I was running on the Schiit Saga+. These happen to be the same tubes that come with the current version of the Euforia, however the Euforia has additional amp magic that can control crossfeed that is not present in the Elise.

I dont' plan on making this a full in-depth review, but rather just simple observations over the course of 2 months of ownership.
First off, the Elise is a beautiful looking tube amp, with solid metal housing and high quality components inside and out. While I thought the Fireflies were modern and industrial, the Elise looks both modern and an art piece that really pops out a modern vintage look, especially with the stock tubes.
The volume knob has just the perfect amount of resistance to it. Its properly weighted and turns buttery smooth and I did not sense any channel imbalance or noise from it. The one thing that I did not like is that it is hard to tell where on the volume spectrum the dial is at since it's black on black, and the tube amp is currently placed in a dark shelf, so I resorted to putting a very thin piece of white electrical tape where the dial indicator is to determine where I am. It also looks quite nice actually.
The general sound signature between the stock PSVANE tubes and the upgraded CV181-TIII tubes is very subtle. They both share a warm, intimate sound that has as slight bass bump that is measurable and audible to me. The upgraded tubes add a little bit more soundstage, realism, and resolution but, again, very subtle.

In terms of pairing, I have several headphones and found that some worked well and some didn't.
The Fostex TR-X00/TH-6X0 series of biodynamic headphones have very linear impedance curves and I didn't hear any changes in the sound going from a solid state to this OTL tube amp. In fact, I think the added warmth made it just a bit too much for my tastes in headphones that I already found warm and relaxing, and occasionally bassy already.
With the Hifiman Arya, I was surprised to say that they paired well with them. Planars, especially power hungry ones like the Arya, do not typically play well with OTL amps, but for whatever reason, I did enjoy using the Arya and its sharper transients and edgier, brighter sound with the softer and warm Elise. The combination of the two mashed up into slightly toned down experience of the Arya, and made them quite enjoyable for long term listening.
On the other hand, the Audeze Sine, another planar that surprisingly requires a bit of oomph to get going, did not sound very well with the Elise. I don't have much to comment here, but I just didn't like this combination for whatever reason. It seemed to lack the dynamics and energy that I liked in the Sine.
I also tried HEDDphone with the Elise and that was quickly unplugged and put back into the Topping A90 solid state amp. Unfortunately this combination just didn't do anything for me and really hindered the HEDDphones' dynamics and resolution.
Now, the star of the show and the whole reason I even considered spending $1600 on the Elise was to get to pair it with the ZMF Verite Open-back headphone. This combination is wonderful. For whatever reason, I found the Verite to magically open up and grow in scale with a higher impedance amplifier. I noticed this first with just a cheap $40 amp/dac that I was goofing around with. The Verite's bass response became more tactile and the soundstage became holographic and the treble opened up. I don't know if being such a high impedance headphone that using a low impedance, highly linear solid state dampened it too much, or if the impedance curve for the Verite matched my preferences more at higher impedances, or what, but something is going on.
Because when I pair the Verite with the Elise, the same senses come out. The bass feels both tighter, and more dynamic, the soundstage opens up and engulfs me, and the treble renders itself whole again, and not just a weirdly tuned haze. That said, it's still hazy, especially after A-Bing from the Hifiman Arya, but it has some more 6th sense to it that I can't fully explain scientifically or with measurements.
To be short and simple. I bought the Feliks Elise to pair with the ZMF Verite, and it was a big investment, and so far, I am happy with this plan.