The MT4 is the second IEM from Chinese brand Mangird that I am aware of and comes on the heels of their previous and more expensive model, the Tea. While the Tea was priced at $299, the MT4 comes in an easier to swallow price point of $199 USD and is available at Linsoul.com for whom I received this review sample from.
https://www.linsoul.com/products/mangird-mt4
The MT4 reduces the driver count from the 6BA+1DD setup of the Tea to a 3BA+1DD setup, while also changing the shell design. The MT4 shell is shorter but longer and fits a little more comfortably to me than the Tea. The MT4 that I received comes in a dark blue faceplate with the Mangird logo featured on the front, with a translucent inner blue shell that shows off the internals.
The included accessories are the same as the Tea. This means it comes with a medium thickness braided 2-pin cable that is silver-colored with aluminum connectors and split, with a clear bead-shaped moving chin/neck strap. It also comes with a package of tips with their own plastic clear case, and a round black tin case that is is closed and sealed with a rubber gasket that can be pushed in to open. 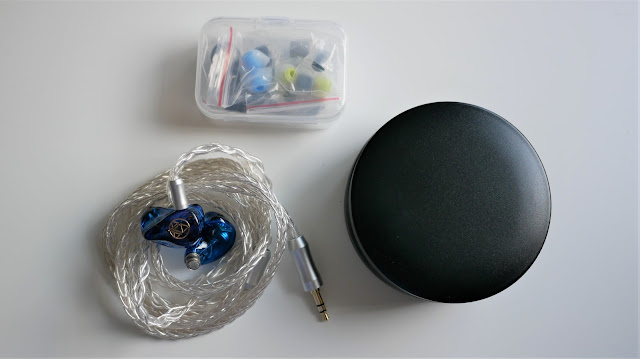 My very first initial impressions of the Mangird MT4 weren't that pleasant. I thought they were muddy and compressed sounding and seemed a little closed in. Upon further listening, I may have been a little too harsh on it, but I still do find it is perhaps too mid-bass emphasized for my tastes, with a slightly recessed mid-range and a darkish treble response. It is not too dissimilar to the Mangird Tea in that it does feature a darker tonality, but I did like the Tea for it's clean and focused mid-range and sub-bass elevation.

The MT4 goes opposite of this with less emphasis on the sub-bass and more in the mid-bass with a downsloping bass response that goes well into the mid-frequencies. This does give me that sense of bloated bass response and compressed sound. Bass notes are thick and punchy, with kick drums hit full of power. This isn't the IEM you want for quality notes, but for quantity.
There is a nice upper mid-range rise though, but it does peak at 2KHz instead of my preferred 3KHz peak, however this IEM does not exhibit shouty behavior. In fact, I do find this upper mid-range and treble response to be a nice balance of clarity and warmth. It provides a rustic intimate sound that isn't exaggerated and has a natural presence to it.

I did mention I find the MT4 a little dark, and I believe that has more to do with the bass response being a little overwhelming compared to the rest of the spectrum. While it's not a huge problem, it's just not my preference. I do think that users with a desire for a very warm, thicker tuning and wants a punchy and non-fatiguing sound will enjoy this for what it is though.
In terms of soundstage and imaging, I find the MT4 on the more intimate side of things, with a closer-up stage than other IEMs that I own and prefer. That said, I don't think these are claustrophobic. They're intimate with decent imaging capability and instrument separation isn't a problem in music that isn't chaotic. It does struggle with music that has a lot more going on, but works quite well in folk/singer song-writer music, or simpler songs of 3 or 4 instruments.
I do find the depth presentation, like the Mangird Tea, to be lacking though. This isn't a huge surprise, as it's not something I find done well at the prices we are talking about here, and only seem to be noticeable at gear in the $500 range and up, with some exceptions.

The MT4 from Mangird is an "alright" IEM. I don't think it has any special characteristics about it, but doesn't have any dealbreaker flaws. I find it is priced reasonably, though there may be some IEMs I'd take over it at the same or similar asking price -- mainly the Tin T4, Shozy Form 1.1/1.4, Moondrop KXXS, and the recent price-drops on the Etymotic ER2, ER3, and ER4 in-ears.
The biggest problems I found with the MT4 are the compressed sound signature and overly emphasized bass, which contributes to the former. I do think the 1KHz and above is done quite well, and is one of the better tuned in this region at this price range, however, but the bass-centric sound does create a slightly darker tonality here.
I would love to see a new Mangird product with the sub-1KHz sound of the Tea and a post-1KHz sound of the MT4, as that seems quite optimal for me. Hopefully we'll get something like that in the future!