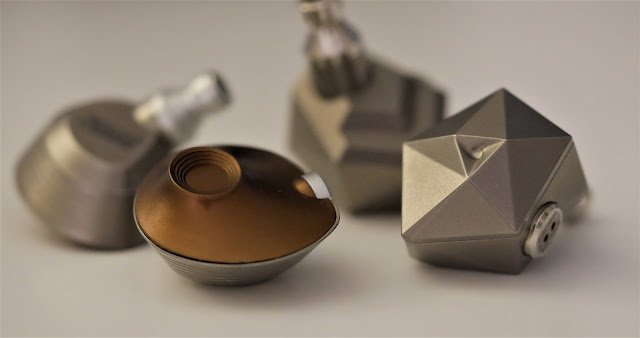 This article will dive into my impressions of the new line of IEMs from Joseph Mou's Metal Magic Research (MMR) brand. For those that may not know, Joseph Mou started Jomo Audio several years ago, which also produce IEM products. With the MMR brand, the products seem to be going after a full metal design and artistic geometries using CNC milling along with luxurious packaging and a price tag to go along with it.
The MMR Thummim retails at $4500 USD and the MMR Homunculus at $1700 USD. Both of these products were sent on loan as part of the MMR Tour at Audio Tiers, and will be sent to the next listener in-line following this review.

The Thummim is a 9-driver tri-brid that features 4 balanced armatures (BA), 1 custom Foster dynamic driver (DD), and a 4 electrostatic tweeters (EST), with a 4-way crossover. The Thummim has an impedance of 35 ohm and also features premium internal wiring from Eletech and premium titanium shell. 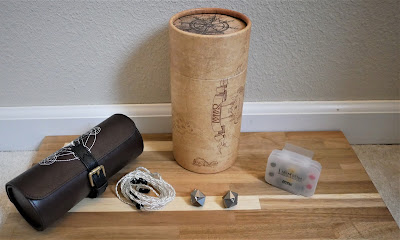 The unboxing experience was pretty unique and interesting for this one. It seems like MMR's goal was to capture what it would be like to unearth a hidden scroll or treasure map. The Thummim comes in a round tube container with papyrus-like artwork on the front. Opening it up reveals a very fun, attractive and peculiar leather case with buckles that is rolled-up like a scroll. This is quite a fancy carrying case that reminds me more of a very fashionable sunglass case than one that houses IEMs and accessories.
Within the case are the IEMs and various accessories such as tips, cable, and manuals. The package came with 6 sets of silicone tips in its own container, and a silver-braided cable that is quite nice looking and easy to handle. The cables terminate in 2-pin connectors.
The Thummim has a very interesting design that is ultra flashy. It's titanium-milled with a very geometric oblong pentagon shape that has many sharp corners and is rather thick, and very heavy for an IEM. The nozzle is round and sticks out quite a bit from the thick shell, and looks rather intimidating to wear.
Wearing it is an experience. It sticks out like no other for me. with almost the entire main body outside of my ear. The sharp corners and edges hit my ear and makes it a bit uncomfortable at times, though not as bad as I had originally thought. And while it is heavy, it actually does not cause any internal ear pain like I had with the Campfire Solaris or Sony IER-Z1R.
Still, the shape of the shell design may not work for some ears, so your miles may vary.

The Homunclus is also a tri-brid, though has only 4-drivers this time. It has a single BA, and the same single Foster DD, and 2-ESTs. It is also rated at 35 Ohm impedance and has similar Eletech Litz wiring. 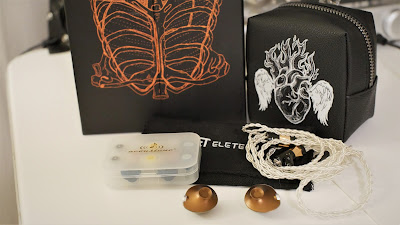 The Homunculus is also crafted from titanium for it's shell, but goes about it differently. In this case, the shell design is more of a disc-shell look with a copper-color exterior and a titanium finish on the inner side. The shape is also quite large and intimidating with sharp edges around the circumference of the shell.
Unfortunately, the edges of the shell do hit my ears and it feels like a dull knife's edge along my ears. Not the best feeling in the world, though I have not been sliced open, so that's a good thing! They are not quite as heavy as the Thummim but still on the heavier side for IEMs.
The unboxing experience is not quite as fancy, but still a unique one on its own. The box has a skeleton chest on the front, which opens up down the middle. Unfolding it reveals a very nice feeling black leather case with a heart-with-wings-artwork on the front. Funny enough, to me the Homunculus IEMs look like a pair of lungs, which would make sense if you unbox a chest to reveal lungs and a heart, but who knows what they're going after here.
The same tips are included, along with a thinner silver-braided cable with 2-pin connectors. This one is also nice to handle and use as well.

Both the Homunculus and Thummim feature a balanced, but bass-shifted sound with warm mid-ranges and an odd treble tonality that is mostly due to the dips and valleys in it's frequency response. I do find that the Homunculus is more neutral of the the two, if you can call it that, while the Thummim is a more warm and heavy sound. Both are warm and laidback, though decently technical in their performances.

The measurements of both, using IEC-711 compliant coupler are shown above, with the thick blue line being the Thummim and the thick yellow line being the Homunculus. Below each are separate graphs of each and their individual channels. It is noteworthy to point out that there is a little bit of a channel imbalance on both sets and I remeasured these several times to make sure it wasn't a user error. For the large graph, I used the average of both channels.
When listening to a variety of music, one thing that stands out are on a random mix of rock songs, I do find that ones that are more female-centric or have more emphasis in the presence region have an odd timbre to them that makes them sound hazy and muffled. It's more apparent on the Thummim to me than the Homunculus, but it's also present there. Sometimes, a more gentle upper mid-range and lower treble region can make a female vocalist sound a little back on the stage and not up and at the front, but with both of these, to slight varying extents, I feel the vocalists is in the far back.
With the Thummim, it can be to the point where I feel like some of the lower ranged instruments can feel overwhelming. It does have a larger lower mid-range and mid-bass accentuation and it's clearly demonstrated. Maybe "clearly" is not the right word, as I do find it can be occasionally muddy, or at least over-bearing.
That said, the Thummim, and Homunculus have a nice punchy bass with a nice amount of natural decay and provide a decent amount of texture capability down-low. It's not the best I've heard, but its good. I may scoff at the price tag to quality here though, as I do find bass layering and resolution on a different playing field with IEMs such as the Unique Melody MEST, Sony IER-Z1R and 64 Audio Nio which also use dynamic drivers for the low end.
The Thummim's bass though is kind of intoxicating, as it's large and engulfing and it knows it. Its thick and wet and may not be the cleanest bass around but its got a lot of power behind it, which was readily apparent in Nirvana's Unplugged live album where Krist Novoselic's bass guitar display was in full-force. The Homunculus sounds more in-line with how I prefer bass being presented, but it did lack that extra oomph that does make the Thummim more engaging, and I did feel it did not quite have the same life to it.
Both of these products are on the warm and laid-back side of things. I never found them sibilant or harsh nor fatiguing. The most fatiguing aspect of them is just the shear size and weight of wearing them, but not in sonic performance. I do think the Thummim does a better job of sounding present, while the Homunculus is a touch more toned-down but does extend better. 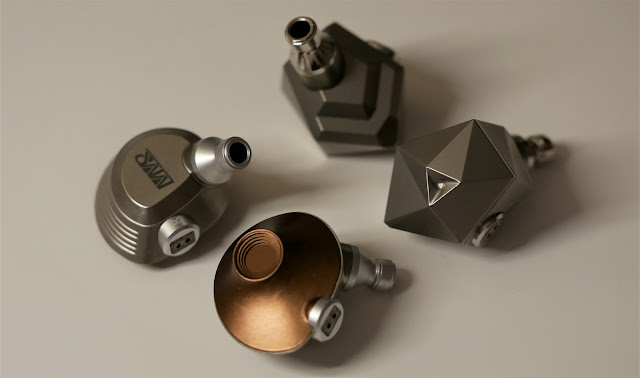 In terms of technical performance, I think both are good in some areas and not in others. In general resolution, I think both are pretty good, though I do feel the tonal issues mask some of the resolution capabilities by making certain instrument sound a bit dull -- like the drum hits in James Taylor's "Fire and Ice" or the same effect in Tingvall Trio's "Vulkanen." I think the resolution is there, it just sounds like the FR issues hinder it from excelling through its foggy nature.
Unlike what I've read from others, I do find the soundstage on the Thummim to be a bit narrow and shallow, giving you both a more front row experience with the band not too far separated from each other. I don't really think that there's a problem with image separation with this IEM, but I don't think it's a wide soundstage and definitely more forward overall than, say, my Unique Melody MEST and Hidition Viento-B. I tested both of these against the Thummim on various live acoustic, jazz and rock tracks and each came out with the Viento-B and MEST ahead of the Thummim in terms of both width, depth, and separation and imaging capabilities.
The Homunculus does have a little more open character to it though, but I do think it's average to perhaps above average in scale, and more along the lines of the Viento-B in staging. 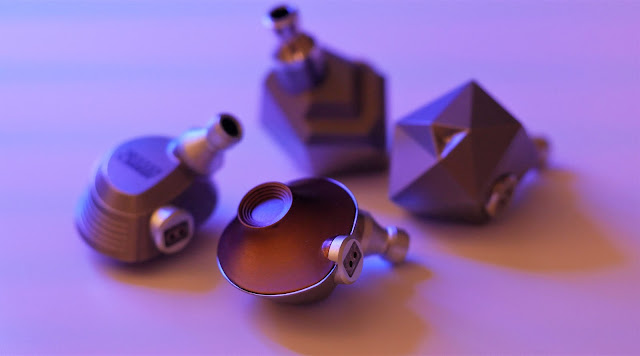 In just general tonal performance, I think I prefer the Homunculus over the Thummim, mostly because I prefer a more neutral-ish sound signature and the bass-centric signature of the Thummim can be a bit overwhelming for me. That said, the Thummim has less treble wonkiness than the Homunculus though both are not necessarily my cup of tea either in this range, as I find both with timbre issues and lacking any liveliness.
While tonally neither of these do much for me, technical capabilities are somewhat there for both. I think both have nice resolution, and imaging, albeit soundstage on both are a bit too forward and intimate for my tastes. The bass decay and thickness of the Thummim can be a guilty pleasure....
And with that, I really don't know what to say about these. For my personal tastes:
In the end, I don't think these two are for me. And especially at the asking price. These are definitely luxury art piece items in my opinion.