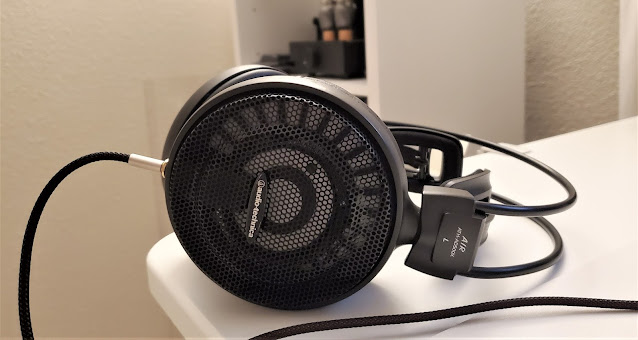 PhilPhone is a DIY project from a community friend, Zerousen, who many who lounge around on the various headphones and IEM discord servers may recognize. This 3rd iteration of the PhilPhone project is a Frankenstein-concoction of the Audio Technica ATH-AD500X, the Fostex TH900, and some extra goodies from Zerousen. This unit was sent on loan to me by our recently departed podcast host, Overlord Rush. (sad)
The TH900 driver is the centerpiece of this headphone and it's been carefully placed inside the AD500X headphone housing, with its driver removed. The fit looks like it was made for this design as I do not see any gaps or flaws in the installation, and if you've seen this Audio Technica headphone before, you'll know that you can see everything on the inside, as the grill is completely openback.
One of the very interesting things I've found personally with the Foster biodynamic drivers is that if you remove the outer wood cup, the sub-bass actually increases than with it on. This is a bit mind-blowing to me, but I guess you will get all the incoming air it needs to really slam, and I've tried this with my own set of Fostex TR-X00 headphones in the past.
And this is the basic premise behind the PhilPhone. Make an open-back headphone that can slam hard, and it does this well. There's plenty of quality bass here, with a nice subbass rise, and bass shelf that kicks off at around 500Hz. Quite silly, but it works.
The TH900-series driver has some inherent and known trouble spots though. One, the upper mid-range can be a tad too forward, and the treble has a large peak at around 8 or 9 KHz. Both of these were present when I listened to the PhilPhone 3 with the stock ATH-AD500X pads that Zerousen included in this set.
The treble was the more annoying portion, as it does make certain music a bit too bright and piercing at times. But overall, the tonality, outside of that was quite nice, as is with most headphones using the Foster drivers.

PhilPhone Normalized to Bass
So... of course, I pad-rolled. I tried out every ZMF pad I owned on this headphone pairing and actually each one gave it a slightly different flavor, and each, in my opinion, improved upon the default AD500X pads.
The ZMF Universe Perforated Leather and the ZMF Verite Suede pads were my two favorites.
The Universe Perforated Leather pads took away the mid-range hump, and also slightly reduced the treble spikes and presented a more smoother sound overall, though it still suffers from the treble spike.
With the ZMF Verite Suede pads, which, for whatever reason is still not listed for sale on ZMF's website, gave this a very warm and laidback sound. The mid-bass was a bit more and the treble was softened, giving this the most relaxing sound in general.
I don't have a whole lot more to say, but I do think this is surprisingly a nicely-made set, which is super lightweight and comfortable to wear for hours. Dampening the treble spike somehow would fix a lot of my complaints, though I think adding additional clamping force would also alleviate some of the brightness issues as well.
Hooray for Philphone!