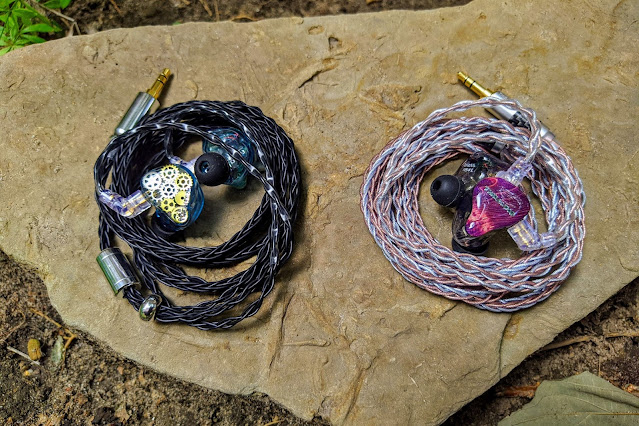 The Voyager and Legacy 3 ship in a minimalist green box featuring its logo. You pull a green loop to slide out the inner box that presents IEM shells and a faux-leather carrying case. Inside the carrying case you'll find the 2-pin QDC style, over-ear IEM cable, a standard set of S, M, and L tips, and a SIM card ejector tool you can use to adjust the switches on the IEM shell. Between the two, I like the Legacy 3's shell design more. The gold clockwork faceplate is striking against the translucent light blue shell. It also has more customization options for the faceplate and you can even get it in custom form for not too much more depending on the customization, making it quite an attractive CIEM option for <$200.
The fit on both the Voyager and Legacy 3 are quite similar, with the typical ergonomic shape that's becoming increasingly common with resin shells. The Voyager 3 however is slightly bulkier than the Legacy 3. Both isolate fairly well. I find that the Legacy 3 does have some driver flex with its DD, marking a slight inconvenience when walking around at times. The cables these IEMs ship with are great. The Voyager 3 in particular ships with the Tripowin C8 cable and one of the best stock cables to come with an IEM that I've encountered. There's next to no cable noise, no cable memory, and is soft and pliable. The Legacy 3's cable isn't up to the same level but still beats out the vast majority of stock cables and is a bit rubbery. Needless to say, there's little need to cable swap unless they die for some reason. 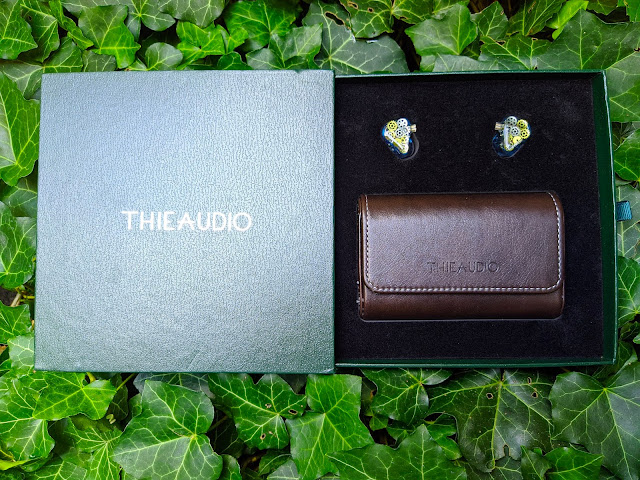 As mentioned before, both the Thieaudio Voyager 3 and Legacy 3 each feature two dip switches for a total of four possible tunings. For the Legacy 3, the switches have essentially no effect and I won't make a distinction between them for this review. For the Voyager 3, the switches have a noticeable difference. I'll post measurements at the end of each review. For reference, I refer to the four tuning options as 00, 10, 01, and 11 where 0 refers to the switch in the up position and 1 in the down position. The settings are read left to right i.e. ON then KE. This picture provides an example of the 10 position.

Don't ask me what ON or KE stand for. I'll chalk it up to some odd lost-in-translation problem from the manufacturers. 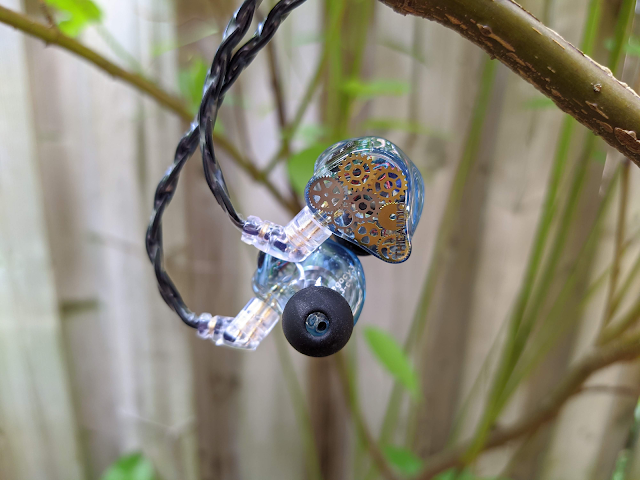 Bass: The bass of the Legacy 3 extends down to 20 Hz with the slightest of roll-offs. It has a nice sense of impact and responsiveness that makes up for its relative lack of texture and nuance. As far as budget IEMs go, this is one of the better bass responses I've heard. It provides the much needed low end presence that makes music engaging while maintaining a balance that doesn't emphasize either subbass or midbass.
Mids: The transition into the low mids is tastefully done. A lot of budget IEMs can struggle here but the Legacy 3 handles it with no issue. There isn't much bass bleed or muddiness from the DD and nor a jarring DD/BA transition at the crossover. The Legacy 3 has just a hint of warmth in the lower mids. The upper mids has plenty presence with a forwardness that brings out clarity in vocals and electric guitars. Combined with the slight warmth in the lower mids, the Legacy 3's mids response nicely handles the tone of a majority of instruments. From the quiet strumming guitar coupled with a vocalist's whispered words to the screaming overdriven notes of lead electric guitar, the Legacy 3 is well suited to modern pop/rock genres.
Treble: Where the Legacy 3 stumbles is its relative lack of treble. Right at the transition between the upper mids and lower treble, there is a sharp drop-off in volume. This is not to say the Legacy 3 cannot produce treble at all. It can and the Legacy 3 is certainly not a dark IEM. It is simply de-emphasized. The sharp, crisp sound of the hats or delicate shimmer of the the cymbals have less presence, leading to a duller tone. For those sensitive to treble, the Legacy 3 would be a good choice as it is far from fatiguing with no sibilance issues. I liken it's lack of treble to that of the Etymotic ER4 line. It's there but its far from the focus. I find that the overall tonality of the Legacy 3 isn't negatively affected by this, with the exception of instruments that specifically rely heavily on the upper harmonics.
Technical Ability: On a technical level, the Legacy 3 is a solid performer for it's price bracket of about $120 but won't be taking home any medals. Imaging is a bit better than your standard budget IEM though its soundstage is mediocre with a flat 2D, in-your-head type of sound that's in line with 90% of other IEMs out there. Resolution and separation are competitive with some of the better products in this price range but are decidedly a step down from the best performers (i.e. Etymotic ER2, Tin Audio T4, Moondrop Starfeld).
Conclusion: As a whole, I quite like the Thieaudio Legacy 3. While it lacks the treble response that I generally look for in my IEMs, the mids balance and bopping bass response kept me listening to it for longer than I'd normally do for a review. While I don't think it provides the greatest value from a price/performance standpoint, it is a solid contender to the $100 or so IEM range. Where I see the Legacy 3 be undisputed is as a CIEM. The number of CIEMs you can buy <$200 can be counted on one hand and the Legacy 3 has a firm foundation in both tuning and technical performance.
Measurements:
My set has very slight imbalance but this is not noticeable at all. 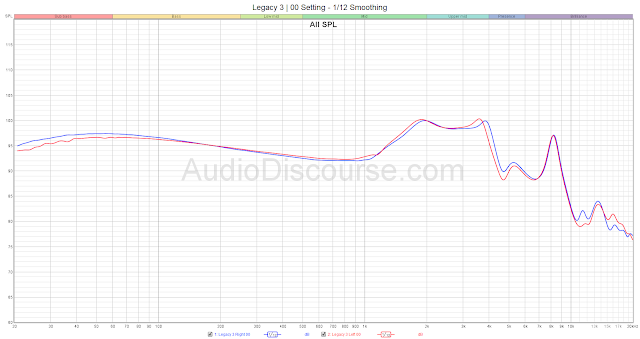 You can see in this graph that regardless of what setting you're on, there's effectively no difference. 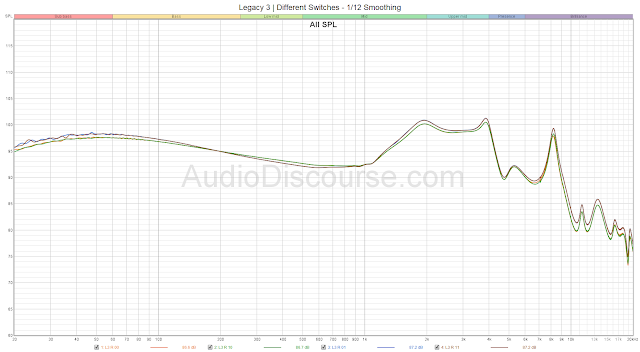 *Disclaimer: The Legacy 3 has a unit variation issue. Antdroid has previously documented it here. My unit has the old (orange) tuning. Based on the measurements, I would probably enjoy the newer tuning even more. That said, I still find the old tuning enjoyable as demonstrated in my review. 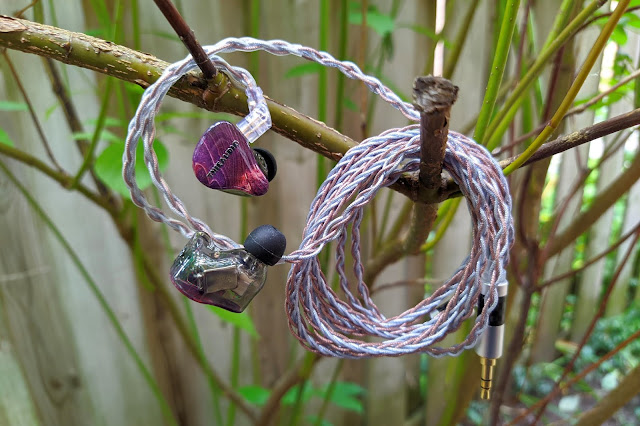 Technical Ability: The technical performance of the Voyager 3 is quite similar to that of the Legacy 3. Both imaging and soundstage are about on par for most IEMs - a flat 2D, in-your-head sound. Resolution and separation are very middling and a step back from the Legacy 3. Dynamics are blunted. For $160, I'm fairly disappointed. The technical performance of the Voyager 3 is on the level of some of the better $50-80 IEMs. BA timbre is not bad but is absolutely noticeable in the bass when comparing to the Legacy 3.
Tuning 00: This is my second favorite tuning. The bass is bloated but there is serviceable upper mids clarity to balance things out. There's a peak around the lower-mid treble that manifests as splashy cymbals and brings out the crack of the snare. Some may find this fatiguing. As with the other tunings, upper treble is lacking and there is no sense of air or sparkle. 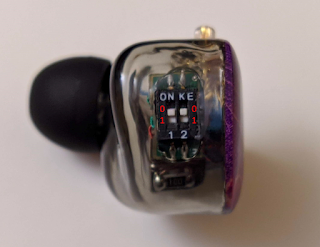 Tuning 10: This is my favorite tuning. The bass is dipped just a tad while adding a bit more upper mids and treble. It's essentially a cleaner version of tuning 00. Although the bass is still slightly bloated, it's not an issue. My only complaint with this (which also applies to tuning 00) is that the splashy treble sometimes sometimes jumps out at you and the lack of treble extension makes the tone a little wonky. The Legacy 3's tuning is better IMO. There's just a much better balance between the mids and the bass in the Legacy 3 despite it's lack of treble. The Voyager 3's 10 tuning passes the bar for decent and that's about it. 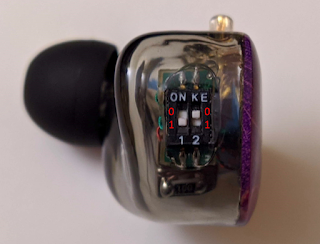 Tuning 01 and 11: Like 00 and 10, these tunings are quite similar. For the most part, I dislike both. Compared to the 00 and 10 tunings, these sound bloated and muddy with a severe lack of presence in the mids due to a very small pinna gain. The 01 tuning is worse by a little bit. These tunings essentially dampen the uppers and treble. Because the low-mid treble hump is tamed, there is a further lack of clarity and the treble now just sounds cheap. Interestingly enough, the 11 tuning graphs fairly closely to the pre-2020 CFA Andromeda. While I also did not like the Andromeda's tuning when I had a chance to demo it, it was a lot better than this. I think the significantly improved technical performance and upper treble extension of the Andromeda play a big part in that. All that being said, I can see how some people like this sort of laid back, warm tuning. When I compare it directly to the Legacy 3 which has a much better balance, the 01 and 11 tunings are hard to enjoy. But after a good 30 minutes or so my ears started to adjust and I began to enjoy the music through this tuning. For some tracks, the lack of pinna butchers the vocals. But depending on the mix, other tracks aren't really affected at all. Of course, YMMV depending on what you listen to. 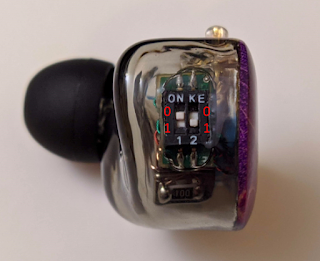 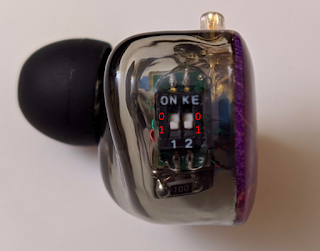 Conclusion: It's hard for me to recommend the Voyager 3 beyond the novelty aspect of playing with tuning switches. Its technical ability is middling at best. The best tuning setting is relatively decent. For $160, the Voyager 3 really shouldn't exist. To be fair to Thieaudio, the Voyager 3 was their very first foray into IEMs and the <$200 market is phenomenally competitive. The one case where I can see the Voyager 3 be worth it is if you're curious about tuning switches as I can't readily think of any other <$200 IEM out there with switches that meaningfully contribute to the overall sound. Though there are a number of other IEMs out there with tuning filters.
Measurements:
You can see the channel matching is quite good on the Voyager 3. 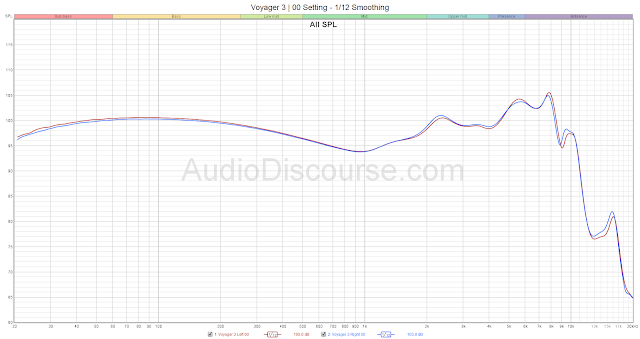 Here are the four tuning options. You can clearly see that if the second switch is in the "up" position, it has a lot more upper mids and treble presence. 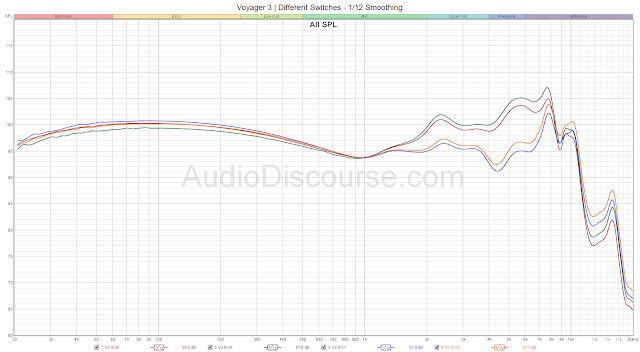 Should You Buy It and Which One?

As evident in my review, I would consider the Legacy 3 to be worth it while the Voyager 3 can be safely ignored. The Legacy 3 beats out the Voyager 3 in almost all respects unless you specifically want that Andromeda-like laid-back, warm tuning with minimal vocal forwardness from the Voyager 3. At $120, the Legacy 3 is a good value and I feel comfortable recommending it, especially if you want a CIEM. And while there may be better value propositions on the market, those may not fit your needs. As always, make sure you think about what exactly you want out of your IEMs and do more research into what fits your needs. If the Etymotic ER2, the Tin T4, or Moondrop Starfield have some sort of deal breaker for you, the Legacy 3 is worth a look.