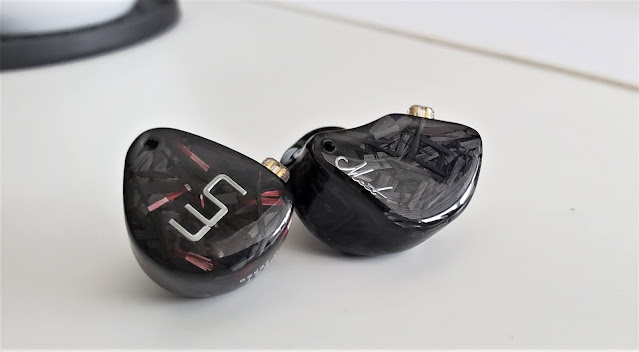 The Unique Melody MEST Universal is one of my random sleeper picks of the year for in-ear monitors and I reviewed it as such earlier this year. It has a surprisingly colored, but coherent and exciting sound that has fantastic bass response, resolution, and a holographic soundstage that was addicting. In this review, I'll be looking at the custom version of the MEST and comparing the differences between the two versions of the same IEM, at least from my point of view.
The Unique Melody MEST CIEM was provided by Unique Melody for this review, while I was loaned the universal version by Tyler (Darthpool / Tyler's Eclectic) for doing a comparison review.

The MEST comes in a small black box, which inside contains a carrying case, cable, adapters, and warranty card, and of course, the MEST themselves. Early sets of the Unique Melody MESTs came with custom Dignis-brand cases, however, due to shortage of stock, the custom I received came with a gray soft zippered pouch instead. It's not the best case around, and feels a little lackluster for the price point. It is also noteworthy to mention that this is the same case that came with the Unique Melody ME1 from a few years back that I have already.
The cable that comes with the custom is the same as the universal -- a braided silver and gray cable that is on the thicker side of IEM cables and also not the most flexible and easy to handle. It also lacks a proper y-split and chin strap, instead, using transparent heat shrink, making it a tad cheap looking. The source connector terminates in a 2.5mm balanced jack, and the package comes with L-shaped adapters for 4.4mm and 3.5mm.
The video below has a full unboxing of the custom MEST that I received.

The MEST custom fit is the deepest and also tightest fitting of my custom IEMS I own, which is not 4 total. It is slightly deeper than my Hidition Viento-B and extends pass the 2nd bend. The canal diameter is tight to my ear shape, and that makes it get very intimate contact with all parts of my ear. I assume this is to fully use the bone conductor driver, and I will say that I did have some discomfort initially with my right ear, while my left ear has been a pain-free experience from the beginning.
Those who may not be used to custom fit monitors, will likely have a break-in period of up to a week or so to get used to the fit and just something deeply inserted into your ear. It took my right ear about 3-4 days to adjust through minor discomfort, but now I do not have any issues wearing these and luckily do not need to get a re-fit.
One thing to note is that UM offers both real impressions as well as STL 3D-scanned impression files as options for preparing the custom units. This is a nice feature and I took advantage of it since I already have 3D scanned files of my own set of impressions, which I have now used 3 times on IEMs and ear tips.

The Unique Melody MEST Custom has a warm and laid-back, but very well extended-treble and sub-bass, which gives this a very nicely balanced IEM. When comparing to the universal MEST, shown in black in the graph below, the Custom, in red, has a smoother and more boosted upper treble, while also a larger soundstage and improved bass resolution. Let's discuss it a little bit more, shall we?

The star of the show for me with both the universal and now the custom version of the MEST is the bass. Normally, I don't worry a great deal about bass quantity, but I do care a lot about bass quality, and also sub-bass performance. In the case of the MEST, the sub-bass is well emphasized, and the resolution, layering and texture qualities are off the charts for me.
I listen to a lot of jazz music with a heavy-use of the double bass guitar, and when that instrument is paired with a bow, it makes a layered wall of sound that is deep and reverberates well on the MEST. The tactile response and the slam factor is extremely well done on this unit and I am happy to say it's improved on the custom model with additional sensation of vibrating sound in my ear canal.
The genre where I think the MEST shines the most is rock music, and especially ones with a lot of electric guitars and effect pedals. Music from bands like Sonic Youth, My Bloody Valentine and The War on Drugs really take flight here, with the fazor and reverb effects shown in full resolution and also with a great amount of layering quality that is needed to hear the wall of sound produced by bands like these.
The mid-range is very similar on both the custom and universal, however I do feel like the universal sounds a little more compressed -- not a lot, but just enough to be noticeable. Part of this may be due to the fact  that I find the universal has a very small tilt towards a warmer bass and lower mid-range given it a smaller soundstage width. In contrast, the soundstage is wider on the custom set for me, while still retaining the great depth and holographic soundstage that gives imaging capabilities that made the universal really stand out for me.
The treble area is where these two differ quite a bit, and that's typically true in customs and their universal counterparts. In both my previous two custom/universal swaps, I noticed a shift in treble from focusing in the lower treble to the upper treble in both the Hidition Viento-B, the Thieaudio Legacy 3, and now the Unique Melody MEST. It's an effect that can also be reproduced in a measurement rig, like shown in the graph.
In the universal set, there was a forward sounding peak at around 6KHz. It measures like so, and it's audible to me with certain female vocals and guitar strings sounding much more forward, as if they were right in the front of the stage. The side effect is that the guitars and stringed instruments have a more intimate twang to them, which can resonate a bit harsher and louder than what I experienced in the custom set, where the upper mid-range and treble region is rather smooth and very clean and balanced.
That isn't to say the MEST Custom doesn't have it's flaws though. It's rather minor, but because of the deeper insertion, the treble peak is no longer at 6KHz for me, but shifted further back to about 12-13KHz in my use of test tone listening, measurement rigging, and actual listening.
Music that has a lot of cymbal splashes or violins constantly attacking can come off a bit bright and fatiguing if I listened louder than my normal listening volumes of 70dB or so. This can be so much that in listening sessions, I can hear ringing in my ear for a short period after taking the MEST custom out of my ears. I am fairly confident this is due to the upper treble bump, but that's typically not a major issue with most music I listen to because very few instruments have harmonics that extend that high anyway, and is really only a problem if I listen louder than my normal listening volumes.

Source matching is an important item to discuss with many IEMs and the MEST is no different. I have found that the MEST does have low tolerance for impedance matching and so I measured several source impedances with the MEST to see how the graph changes with higher impedance. As shown below, the MEST tends to get bassier, while reducing mids and upper treble as impedance rises. This made even a small impact at 2.7 Ohms using the iFi Ear Buddy and IEMatch attenuator.
The majority of my actual listening was on the Sony NW-ZX507, which is roughly 1 Ohm output impedance.

Before I sign-off on this review, I do want to mention that I did a full in-depth video review of the MEST Custom and Universal in the YouTube video below here. This is one of the more rare times where I go more into the nitty gritty in a video than I do in a written form, so please feel free to watch and get more of how I feel about the MEST.