Today I'm going to be looking at the TRN VX, a 6 BA 1 DD hybrid IEM that costs about $70 from HiFiGo. TRN is yet another ChiFi company that has popped up in the last couple of years and seemingly puts out new products ever few months or so. I've had the chance to listen to the TRN V80 and the TRN V90 before. I wasn't a big fan of the V80 but thought the V90 was fairly decent relative to other offerings at the $50 mark at the time. With that, let's see how the TRN VX does. Disclaimer: I received the TRN VX from HiFiGo in exchange for this honest review. I have not been or will be compensated in any other way. 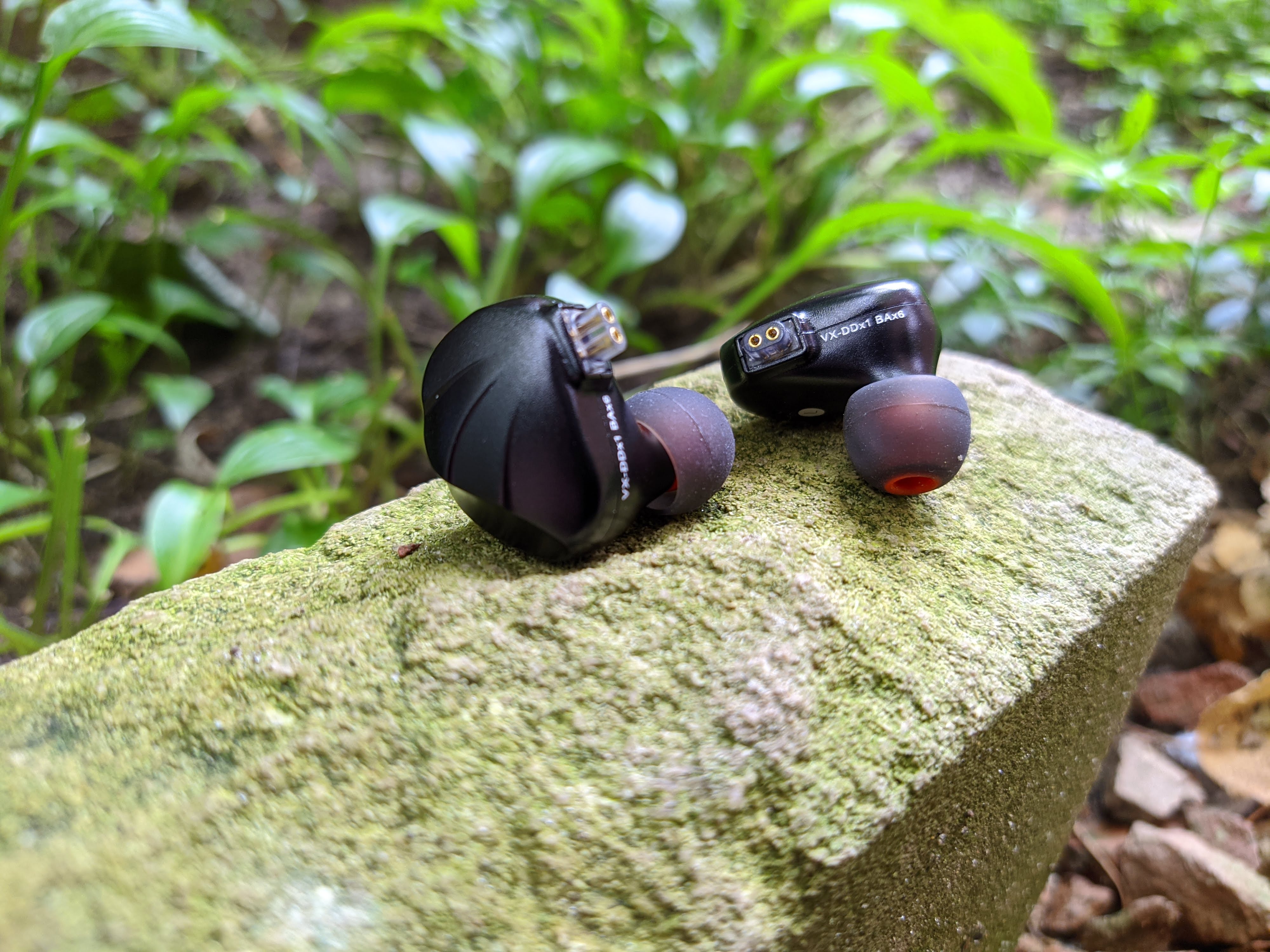 The unboxing experience is a very barebones affair. You get a minimalist white box that holds the IEM, cable, and tips. You get a generic set of S, M, and L size tips and a black 2-pin TRN cable. I dislike the cable. It is very tangly and has cable memory such that kinks are ever present. I'd probably swap out the cable if I were to daily drive the TRN VX.

The construction of the TRN VX is solid. It's a full metal shell and aesthetically pleasing with a clean look and tasteful chamfer lines. The TRN VX fits over ear and I find it to be quite comfortable thanks to its reasonably sized nozzle. Isolation is poor. You will hear cars as they pass by, if you still go out. 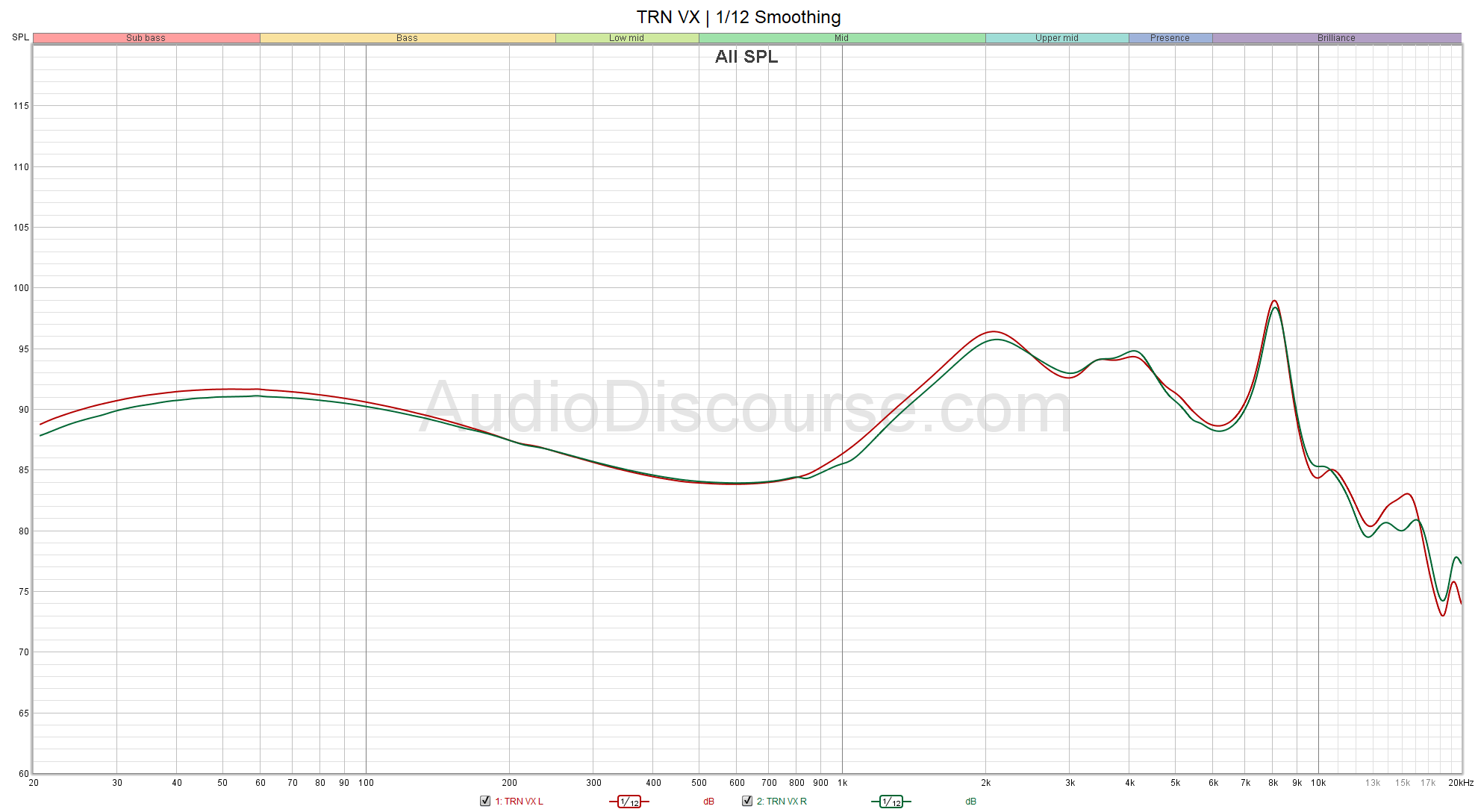 My initial impressions of the TRN VX's sound was favorable. It's a bit of a W-shaped IEM as it has a midbass emphasis, an upper mids forwardness, and a bright tilt. I'd consider it fairly well tuned and overall decently balanced. The bass clearly has that DD heritage while the mids don't suffer badly from BA timbre. Its treble energy may be the make-or-break for those looking at this IEM.

As seen the graph, the bass is clearly lifted. While not overpowering, it's definitely bassy. The VX has a more midbassy approach to the bass rather than subbass focus and we can see it rolling off, though not too badly. The DD in the VX drives the bass and has a dynamism that gives plenty of energy to the bass. Though it lacks texture, it is responsive and has doesn't feel bloated or sluggish. Compared to the majority of other IEMs in the budget segment, the bass of the VX trades blows or edges out its brethren. You'd have to go to IEMs like the Tin HiFi T4, Moondrop Starfield, and Etymotic ER2 to clearly best it.

Interestingly, I don't find the TRN VX to be a warm IEM despite the bass bleed into the lower mids that the graph may suggest. And the reason is fairly obvious: the large amount of pinna gain and upper mids around the 2-4 kHz mark offsets the warmth I'd otherwise expect. Speaking of the seeming bass bleed, I don't find that the VX has an issue there at all. The bass transitions into the low mids without fanfare. But back to the upper mids. Some may find the VX shouty; I don't. Though I will admit that I generally have a higher tolerance than others in this regard. Vocals have an obvious forwardness and is presented with plenty of clarity. There is a bit of an edginess to certain "sss" consonants in the vocals, though not to the point of full blown sibilance.

The lower treble around 5-6 kHz is de-emphasized so there isn't too much of the crisp attack from the hats and cymbals. Nor is there harshness in the vocals. But past that is some treble oddities that aren't reflected in the graph (note: the 8 kHz peak is a measurement artifact - take it with a grain of salt). To start, there is a sharpness and some splashiness when it comes to the hats and cymbals. It's not so much the initial attack but the decaying ring that gains a brightness that can be fatiguing to listen to. There's a sense of aggression with the treble, and not in a good way. Generally speaking, I find that most IEMs, regardless of price, struggle to properly render the highly delicate and nuanced sounds of the hats and cymbals. In the case of the VX, this is exacerbated and turns into emphasized incoherence in poorly recorded music. For those sensitive to treble, the VX may not be for you.

Soundstage and imaging are about average for IEMs. It's not claustrophobic or congested but doesn't strive beyond that. Resolution is surprisingly good. Part of it may be due to the forwardness of the mids and aggressiveness of the treble but I felt that, like the bass, it performs better than the majority of other offerings in the price range. Well done here by TRN. Like the staging, instrument separation and layering are fine. Nothing standout about them nor will they be the limiting factor of the overall sound quality. 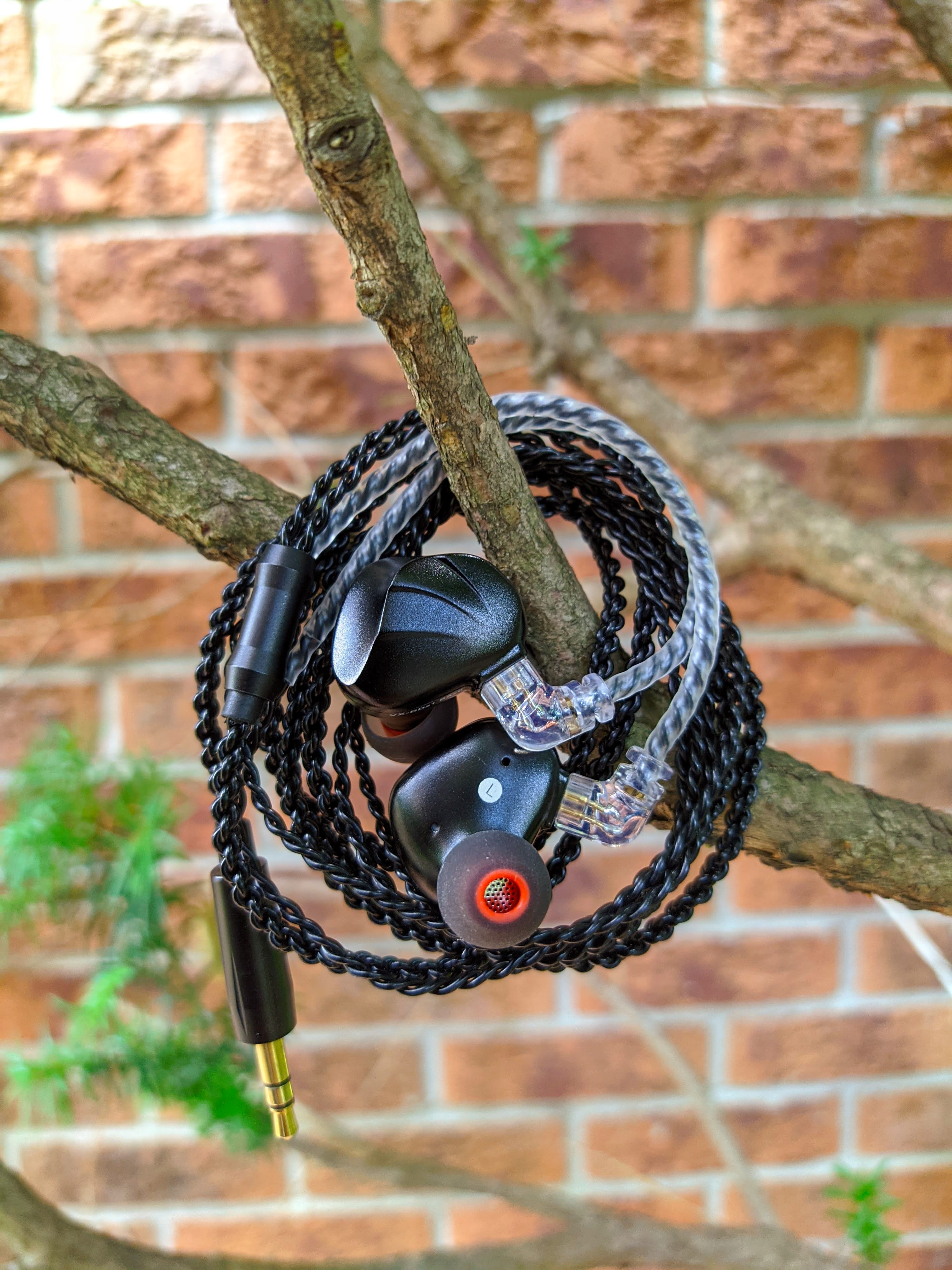 The T2 Plus is my current budget benchmark as it provides solid tuning and respectable technical performance at the $50 sweet spot. Unfortunately, the T2 Plus pretty much beats the TRN VX in all respects except for the bass. The T2 Plus' bass is a little unconventional; it's not bad per se but is rather unique. I called it "bouncy" in my T2 Plus review. On the other hand, the TRN VX's bass has a more standard, straightforward approach and I'd say is a sidegrade or minor upgrade. The T2 Plus' treble response is much better than the TRN VX. Mids is a toss up. If you like vocal forwardness, get the VX. The T2 Plus' vocals is more subdued in comparison. Technical performance of both IEMs are otherwise on par with each other. For $50, the T2 Plus is just a straight up better price/performance proposal especially when it comes with better accessories.

To be honest, one of the first thoughts I had when listening to the TRN VX was that it was a cheaper, exaggerated version of the Legacy 3. To an extent, I think that still holds true. The tuning of the VX  has more upper mids, more bass, and has treble compared to the relatively treble-weak Legacy 3. A/Bing the two, I think it mostly comes down to a tuning preference issue. The Legacy 3 is noticeably warmer with laid back vocals and the lack of treble is very apparent next to the VX. The Legacy 3 has a slightly better bass response. VX's more midbass focus causes it to fall short when a solid deep note is needed.

The TRN V90 was one of TRN's previous offerings that I reviewed before the VX. At the time, I thought it was pretty decent and on par with the KZ ZSX and BLON BL03. Tuning wise, they're fairly different. V90 has a classic in-your-face V-shape while the VX has a more balanced tuning. Between the two, I'd say the VX is better but honestly the differences aren't night and day. If you already have a V90 or any other decent $50 or so piece of ChiFi, I'd suggest that you look for a bigger upgrade than the VX. At the very least, get the Etymotic ER2/Tin Audio T4/Moondrop Starfield.

Not really. The TRN VX is a very solid budget offering. The challenge lies in its competition. For $50, the T2 Plus exists. For $80 or so, you can sometimes find the Tin Audio T4 or Etymotic ER2 on sale and those pretty much blow the VX out of the water. The only reason you should buy the TRN VX in my view is if you've heard the T2 Plus and crave more upper mids forwardness and treble presence. At the end of the day, if you already own a TRN VX or for some reason really want to buy one, be happy with it. It's a fine IEM and not every IEM can be a contender for the price/performance crown. The TRN VX has been a commendable effort and I look forward to what TRN does next.